Orange juice is the liquid extract of the fruit of the orange tree.

It is made by squeezing the fresh orange. Some commercial orange juice with a long shelf life are made by drying and later re-hydrating the juice, or by concentrating the juice and later adding water to the concentrate. Others are made by pasteurizing the juice and removing oxygen from it, necessitating the later addition of a flavor pack, generally made from orange products. It is known for its health benefits, particularly its high concentration of vitamin C. It comes in several different varieties, including blood orange. In American English, the slang term O.J. may also be used to refer to orange juice.

Due to the importance of oranges to the economy of the state of Florida, "the juice obtained from mature oranges of the species Citrus sinensis and hybrids thereof" was adopted as the official beverage of Florida[1] in 1967.[2]

Citrus juices contain flavonoids (especially in the pulp) that may have health benefits. Orange juice is also a source of the antioxidant hesperidin. Because of its citric acid content, orange juice is acidic, with a typical pH of around 3.5.[4]

Commercial squeezed orange juice is pasteurized and filtered before being evaporated under vacuum and heat. After removal of most of the water, this concentrated juice, about 65% sugar by weight, is then stored at about 10 °F (−12 °C). Essences, Vitamin C, and oils extracted during the vacuum concentration process may be added back to restore flavor and nutrition (see below).

When water is added to freshly thawed concentrated orange juice, it is said to be reconstituted.[5]

The product was developed in 1948 at the University of Florida's Citrus Research and Education Center. Since, it has emerged as a commodity product, and futures contracts have traded in New York since 1966. Options on FCOJ were introduced in 1985. From the late 1950s to the mid-1980s, the product had the greatest orange juice market share, but not-from-concentrate juices surpassed FCOJ in the 1980s.[6]

Removing the oxygen also strips out flavor-providing compounds, and so manufactures add a flavor pack in the final step,[7] which Cooks Illustrated magazine describes as containing "highly engineered additives." Flavor pack formulas vary by region, because consumers in different parts of the world have different preferences related to sweetness, freshness and acidity.[8] According to the citrus industry, the Food and Drug Administration does not require the contents of flavor packs to be detailed on a product's packaging.[9]

One common component of flavor packs is ethyl butyrate, a natural aroma that people associate with freshness, and which is removed from juice during pasteurization and storage. Cooks Illustrated sent juice samples to independent laboratories, and found that while fresh-squeezed juice naturally contained about 1.19 milligrams of ethyl butyrate per liter, juice that had been commercially processed had levels as high as 8.53 milligrams per liter.[8]

A small fraction of fresh orange juice is canned. Canned orange juice retains Vitamin C much better than bottled juice.[10] The canned product loses flavor, however, when stored at room temperature for more than 12 weeks.[11] In the early years of canned orange juice, the acidity of the juice caused the juice to have a metallic taste. In 1931, Dr. Philip Phillips developed a flash pasteurization process that eliminated this problem and significantly increased the market for canned orange juice.[12] 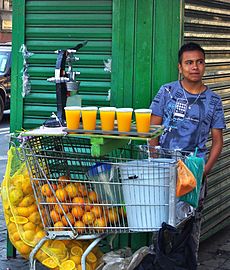 Fresh-squeezed, unpasteurized juice is the closest to consuming the orange itself. This version of the juice consists of oranges that are squeezed and then bottled without having any additives or flavor packs inserted. The juice is not subjected to pasteurization. Fresh squeezed orange juice has a typical shelf life of 12 days.[citation needed]

In the U.S., the major orange juice brand is Tropicana Products (owned by PepsiCo Inc.), which possesses nearly 65%[citation needed] of the market share. Tropicana also has a large presence in Latin America, Europe, and Central Asia. Competing products include Minute Maid (of The Coca-Cola Company) and Florida's Natural (a Florida-based agricultural cooperative that differentiates itself from the competition by using only Florida grown oranges; Tropicana and Simply Orange use a mixture of domestic and foreign stock). In Australia, Daily Juice (owned by National Foods) is a major brand of partially fresh, partially preserved,[13] orange juice.

In the United Kingdom, major orange juice brands include Del Monte and Princes.

Some producers add citric acid or ascorbic acid to juice beyond what is naturally found in the orange. Some also include other nutrients. Often, additional vitamin C is added to replace that destroyed in pasteurization. Additional calcium may be added. Vitamin D, not found naturally in oranges, may be added as well. Sometimes Omega-3 fatty acids from fish oils are added to orange juice.[14] Low-acid varieties of orange juice also are available.

Juice producers generally use evaporators to remove much of the water from the juice in order to decrease its weight and decrease transportation costs.[15]

Because the process removes the distinct aroma compounds that give it a fresh-squeezed taste, producers later add back these compounds in a proprietary mixture, called a "flavor pack", in order to improve the taste and to ensure a consistent year-round taste.[15][16] The compounds in the flavor packs are derived from orange peels.[16] Producers do not mention the addition of flavor packs on the label of the orange juice.[16] 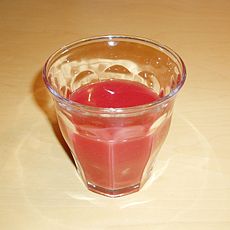 A glass of blood orange juice

Common orange juice is made from the sweet orange. Different cultivars (e.g., Valencia, Hamlin) have different properties, and a producer may mix cultivar juices to get a desired taste. Orange juice usually varies between shades of orange and yellow, although some ruby red or blood orange varieties are a reddish-orange or even pinkish. This is due to different pigmentation in ruby red oranges.

The blood orange is a mutant of the sweet orange. Blood orange juice is popular in Italy, but may be hard to find elsewhere. The Mandarin orange and varieties clementine and tangerine, are good for juice, and are often used for sparkling juice drinks.

Recently, many brands of organic orange juices have become available on the market.