From Infogalactic: the planetary knowledge core
Jump to: navigation, search
This article is about the planting of trees in agriculture. For other uses, see Orchard (disambiguation).
"Orchard farm" redirects here. For the unincorporated town in Missouri, see Orchard Farm, Missouri. 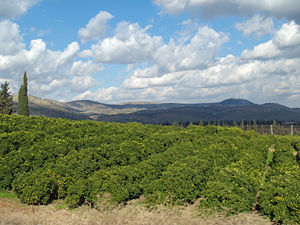 A lemon orchard in the Upper Galilee in Israel. 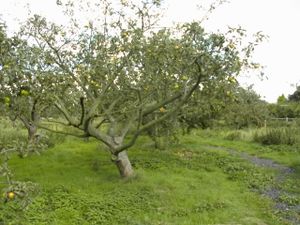 A community apple orchard originally planted for productive use during the 1920s, in Westcliff on Sea (Essex, England) 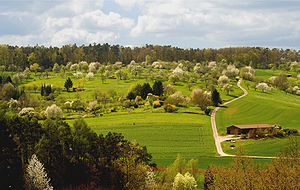 Streuobstwiese, a rural community orchard, traditionally for productive use. Today endorsed for its quality of habitat and biodiversity

An orchard is an intentional planting of trees or shrubs that is maintained for food production. Orchards comprise fruit, vegetable, and nut-producing trees which are grown for commercial production. Orchards are also sometimes a feature of large gardens, where they serve an aesthetic as well as a productive purpose.[1] A fruit garden is generally synonymous with an orchard, although it is set on a smaller non-commercial scale and may emphasize berry shrubs in preference to fruit trees. Most temperate-zone orchards are laid out in a regular grid, with a grazed or mown grass or bare soil base that makes maintenance and fruit gathering easy.

Orchards are often concentrated near bodies of water, where climatic extremes are moderated and blossom time is retarded until frost danger is past.

An orchard's layout is the technique of planting the crops in a proper system. There are different methods of planting and thus different layouts. Some of these layout types include:

For different varieties, these systems may vary by some extent. 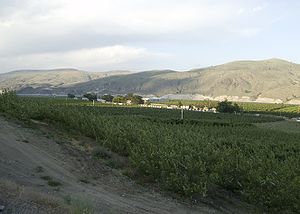 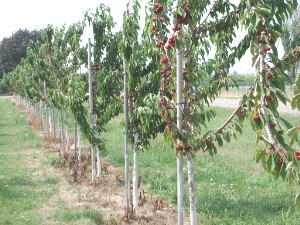 The most extensive orchards in the United States are apple and orange orchards, although citrus orchards are more commonly called groves. The most extensive apple orchard area is in eastern Washington state, with a lesser but significant apple orchard area in most of Upstate New York. Extensive orange orchards are found in Florida and southern California,where they are more widely known as 'groves'. In eastern North America, many orchards are along the shores of Lake Michigan (such as the Fruit Ridge Region), Lake Erie, and Lake Ontario.

In Canada, apple and other fruit orchards are widespread on the Niagara Peninsula, south of Lake Ontario. This region is known as Canada Fruitbelt and, in addition to large-scale commercial fruit marketing, it encourages "pick-your-own" activities in the harvest season.

Tenbury Wells in Worcestershire has been called The Town in the Orchard, since the 19th century, because it was surrounded by extensive orchards. Today, this heritage is celebrated through an annual Applefest.[2]

Streuobstwiese (pl. Streuobstwiesen) is a German word that means a meadow with scattered fruit trees or fruit trees that are planted in a field.[3] Streuobstwiese, or a meadow orchard,[4] is a traditional landscape in the temperate, maritime climate of continental Western Europe. In the 19th and early 20th centuries, Streuobstwiesen were a kind of a rural community orchard that were intended for productive cultivation of stone fruit. In recent years, ecologists have successfully lobbied for state subsidies to valuable habitats, biodiversity and natural landscapes, which are also used to preserve old meadow orchards. Both conventional and meadow orchards provide a suitable habitat for many animal species that live in a cultured landscape. A notable example is the hoopoe that nests in tree hollows of old fruit trees and, in the absence of alternative nesting sites, is threatened in many parts of Europe, because of the destruction of old orchards.[5] 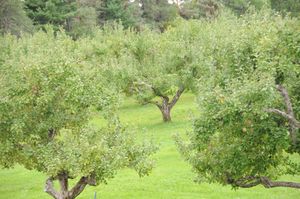 Orchard conservation in the UK