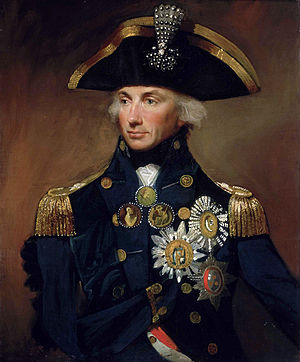 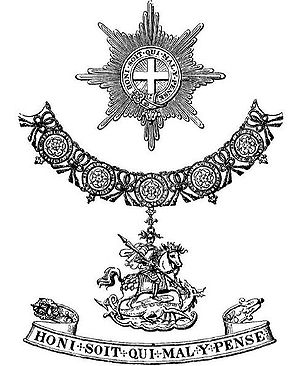 Insignia of the British Order of the Garter.

An order or order of merit is a visible honour awarded by a sovereign state, monarch, dynastic house or organisation to a recipient, typically in recognition of individual merit.

The modern distinction between orders and decorations is somewhat vague, except that most historic chivalric orders imply a membership in a group, typically a confraternity. In a few exclusive European orders, membership is or was also limited in number. Decorations seldom have such limitations. Orders often come in multiple classes, including knights and dames, which may or may not be parallelled in decorations.[1]

Modern orders of merit and decorations can trace their origin back to the monarchical and honorific orders of chivalry as established in the Middle Ages. While these were "societies, fellowships and colleges of knights",[2] created by European monarchs in imitation of the military orders of the Crusades, granting membership in such societies gradually developed into an honour that could be bestowed in recognition of service or to ensure the loyalty of a certain clientele. Some of modern Europe's highest honours, such as the Order of the Golden Fleece, England's Order of the Garter, Denmark's Order of the Elephant and Scotland's Order of the Thistle, were created during that era. They were essentially courtly in nature, characterised by close personal relations between the orders' members and the orders' sovereign.

By the time of the Renaissance, most European monarchs had either acquired an existing order of chivalry, or created new ones of their own, to reward loyal civilian and especially military officials. Such orders remained out of reach to the general public, however, as being of noble rank or birth was usually a prerequisite to being admitted. In the 18th century, these ideas gradually changed and the orders developed from "honourable societies" to "visible honours". An example of this gradual development can be seen in two orders founded by Maria Theresa of Austria. While the Military Order of Maria Theresa (1757) was open to any deserving military officer regardless of social origin, and would grant titles of nobility to those who did not already have them, the Order of Saint Stephen of Hungary (1764) still required that one had to have at least four generations of noble ancestors.

In 1802 Napoleon created the Légion d'honneur (Legion of Honour), which could be awarded to any person, regardless of status, for bravery in combat or for 20 years of distinguished service. While still retaining many trappings of an order of chivalry, it was the first modern order of merit and is still France's highest award today. The French Legion of Honour served as the model for numerous modern orders of merit in the Western World, such as the Order of Leopold (Belgium, 1832) and the Order of the British Empire (United Kingdom, 1917). The orders based on the French Legion of Honour typically have five classes (see below).

In Communist countries orders of merit usually came in one to three grades, with only a badge worn with or without a ribbon on the chest. An example of a Communist order of merit was the one-class Order of Lenin (USSR, 1930). Unlike the Western orders, however, Communist orders could be awarded more than once to an individual. After the collapse of the Soviet bloc most Eastern European countries have reverted to the Western-style order of merit originally established before the rise of Communism.

Following the example set by the French Legion of Honour, founded by Napoleon, most multi-level European orders comprise five ranks or classes. The highest is usually called the Grand Cross, then descending with varying titles. Alternatively the ranks are referred to by number (for example "Ist class" instead of "Grand Cross"). Typical rankings are:

Each of these ranks wear insignia, usually badge (often enamelled) on a ribbon. Typically these insignia are worn from a sash in the case of the senior ranks, around the neck (also see neck orders) for the middle ranks and on the left chest for the lower grades. Some orders use insignia in the form of a cross, but there can also be medals or stars, military awards may have crossed swords added onto the insignias. Ladies may wear the badge on a bow on the left chest. In orders following the example set by the French Legion of Honour, the two highest classes also wear a star (or 'plaque') on the chest. In special cases the senior class may wear the badge on a collar, which is an elaborate chain around the neck.

In certain countries with feudal heritage the higher ranks (usually at least the Grand Cross) may have vestments proper to them, including a mantle and a hat. An example of such a modern-day order is the Order of the British Empire.

Today many countries have some form of order of merit or national decorations. Both Thailand's Order of the White Elephant and Japan's Order of the Rising Sun are over 100 years old. In Canada and some Commonwealth Realms, the Order of Merit is the highest civilian honour. Canada has the Order of Canada and provincial orders such as the Order of Nova Scotia. Australia has the Order of Australia, and New Zealand awards the Order of New Zealand and the New Zealand Order of Merit. The Order of Mapungubwe is the highest honour in South Africa, while the Orders of Luthuli, and the Baobab exist alongside other decorations. The United States awards the Medal of Honor to members of its military for acts of valour, and the Presidential Medal of Freedom and the Congressional Gold Medal to civilians. The Legion of Merit is the only United States decoration which may be issued in award degrees (much like an Order of chivalry or certain Orders of Merit), but award degrees are only made to foreign nationals, typically senior military officers or government officials.

Switzerland does not award any orders. Article 12 of the 1848 Swiss Constition prohibited the acceptance of honours and titles by Swiss citizens.[3] The current (1999) constitution has no specific prohibition, but a federal statute effectively continues the prohibition by barring holders of foreign orders from holding public office.

In 1974 the Cabinet of Sweden passed a regulation forbidding the Monarch of Sweden from awarding membership in orders to Swedish citizens. The orders themselves were not abolished, but only the Royal Orders of the Seraphim and the Polar Star (both established in 1748) continue to be awarded, and only to foreign citizens and stateless individuals. In 1995 the regulation was altered, allowing the Monarch to bestow the two remaining active Orders to members of the Swedish Royal Family.[4]

Modern orders are usually open to all citizens of a particular country, regardless of status, sex, race or creed; there may be a minimum age for eligibility. Nominations are made either by private citizens or by government officials, depending on the country. An order may be revoked if the holder is convicted of a crime or renounces citizenship. Some people nominated for an award refuse it. There are also many dynastic orders granted by royal families to worthy individuals for service and achievements. Examples of dynastic orders include the Order of the Eagle of Georgia and the Seamless Tunic of Our Lord Jesus Christ (Royal House of Georgia) and the Order of St. Anne of Russia (Imperial House of Russia).