Order of Bards, Ovates and Druids

The Order of Bards, Ovates & Druids or OBOD is a Neo-Druidic organisation based in England,[1] but based in part on the Welsh Gorsedd of Bards.[2][3] It has grown to become a dynamic druid organisation, with members in all parts of the world.[4]

The concept of the three roles of bards, ovates and druids originates from the writings of the ancient Greek historian and geographer Strabo, who in his Geographica, written in the 20s CE, stated that amongst the Gauls, there were three types of honoured figures: the poets and singers known as bardoi, the diviners and specialists in the natural world known as o'vateis, and those who studied "moral philosophy", the druidai.[5] Nonetheless, Strabo's accuracy has been called into question, as he was not actually well acquainted with Gaul and was likely relying on earlier sources whose accuracy is also disputed.[6]

OBOD was founded in 1964 as a split from the Ancient Druid Order with Ross Nichols as its leader.[7]

In 1988, more than a decade after Nichols' passing, and after study in the Order and helping to further its reaches,[8] Philip Carr-Gomm was asked to lead the Order. Other notable members also hold somewhat senior positions in the order, often with the title of "Honorary Bard",[9] a good example of this being Damh the Bard [10] who is involved mostly in the UK groves and running the podcast.

The OBOD teachings are available principally in the form of a distance-learning course mailed to members around the world.[11] There is a network of tutors,[12] many using email, to support the students’ progress through the grades of Bard, Ovate and Druid. Members meet at camps,[13] at workshops and assemblies in various parts of the world, and a network of groves and seedgroups also exists. There are a number of internet forums,[14] a private members’ website in addition to OBOD’s public-access site,[15] and a monthly journal Touchstone.[16] Quarterly journals are also published by members in various parts of the world: Dryade for Dutch-speaking members, Menhir in French, Druidenstein in German, Il Calderone in Italian, and two regional English-language magazines—SerpentStar in Australasia and Druid in North America.[17] 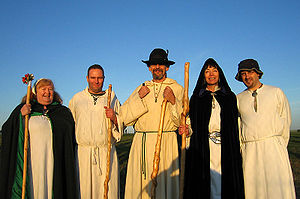 A group of Neo-druids from the Sylvan Grove of the OBOD at Stonehenge on the morning of the summer solstice 2005.

The teachings of the Order could be seen as typical of Neo-druidism [18] today, in that it teaches its followers the belief of the sanctity of nature and a belief in the Otherworld. Although its teaching draws upon Celtic sources, it also incorporates ideas from modern psychology and the Human Potential movement, and membership is open to followers of any religion.[19]

Many members of the Order prefer to learn at home, solitary,[20] as opposed to recorded Druids of early pre-Christian Britain that would have congregated to share wisdom or meet for occasion.[21] Members are sent course information and materials, and may be assigned a tutor if they wish to have someone to communicate with.[22]

Individual Druids and the groups that they practice with are allowed to decide their own pantheons. Many members follow Celtic pantheons, usually relating to the four pre-Christian Celtic nations of England, Scotland, Wales and Ireland, as well as related beliefs and practices, such as ancestral worship,[23] naturism,[24] polytheism and Spiritualism.[25][26][27] The Order's official teachings, however, are presented ecumenically as a spiritual philosophy compatible with many religious beliefs, and other members hold monotheistic, pantheistic, atheistic, and other views. Many OBOD Druids identify as Pagan, but others identify as Christian, Jewish, Buddhist, Hindu, or many other religions, while some follow Druidry as their primary or only spiritual path.[28]