The Order of Saint Lazarus of Jerusalem was a Roman Catholic military order founded by crusaders around 1119 at a leper hospital in Jerusalem, Kingdom of Jerusalem, whose care became its original purpose, named after patron saint Lazarus.[1] It was recognised by King Fulk of Jerusalem in 1142 and canonically recognised as hospitaller and military order of chivalry under the rule of Saint Augustine in the Papal bull Cum a Nobis Petitur of Pope Alexander IV in 1255. The titular seat was successively situated at Jerusalem, Saint-Jean-d'Acre and - after the fall of the Kingdom of Jerusalem - the Château Royal de Boigny-sur-Bionne in France.[2] After several centuries, the order went into decline and ceased to perform its original functions after the French Revolution.

In 1489, Pope Innocent VIII attempted to merge the order and its land holdings with the Sovereign Military Order of Malta. This was resisted by the order in most countries where it still retained its premises.

In 1609, King Henry IV of France linked it administratively to the Order of Our Lady of Mount Carmel to form the Royal Military and Hospitaller Order of Our Lady of Mount Carmel and Saint Lazarus of Jerusalem united, which remained listed as of royal protection in the French Royal Almanac until 1830.[3] Its last living member admitted before the turmoil of the French Revolution died in 1856.[4][5][6]

Notwithstanding, the revived Order of Saint Lazarus (statuted 1910) claims legacy from the suppressed French branch under spiritual protection of the Patriarch of the Melkite Greek Catholic Church,[7] disputed by officials of the Roman Catholic Church.

The word lazarette, in some languages being synonymous with leprosarum, is believed to also be derived from the hospitaller Order of Saint Lazarus, these edifices being adopted into quarantine stations in the fifteenth century when leprosy was no longer the scourge it had been in earlier centuries.[8] 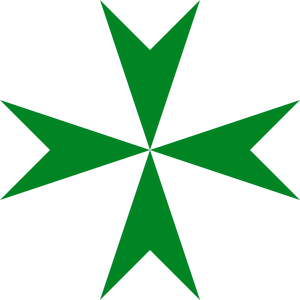 Cross of the order, a Maltese cross, 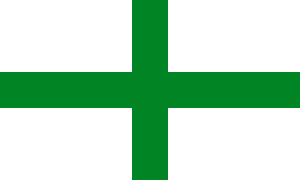 Flag of the order.

The original symbol of the order was a green cross. This was in later centuries changed to a green eight-pointed Maltese Cross. The use of the green cross as a universal symbol of pharmacies worldwide also is believed to have originated with the Order of St. Lazarus, though there is no documentation to substantiate this.[citation needed]

The military order of Saint Lazarus of Jerusalem originated in a leper hospital founded in the twelfth century by crusaders of the Latin Kingdom. There had been earlier leper hospitals in the East, of which the Knights of St. Lazarus claimed to be the continuation, in order to have the appearance of remote antiquity and to pass as the oldest of all orders. According to Charles Moeller, "this pretension is apocryphal".[3]

The Order of St. Lazarus was purely an order of hospitallers in the beginning, and adopted the hospital Rule of St. Augustine in use in the West. It is unclear when the Order assumed a military role.

Hospitals dependent on the Jerusalem hospital were eventually established in other towns in the Holy Land, notably in Acre, and in various countries in Europe particularly in Southern Italy (Capua), Hungary, Switzerland, France (Boigny), and England (Burton Lazars).[9] Louis VII of France, on his return from the Second Crusade, gave it the Château of Broigny, near Orléans in 1154. This example was followed by Henry II of England, and by Emperor Frederick II.[3]

The order quickly abandoned their military activities after the fall of Acre in 1291.[9] As a result of this catastrophe the leper hospital of St. Lazarus of Jerusalem disappeared; however, its commanderies in Europe, together with their revenues, continued to exist, but hospitality was no longer practiced. The order ceased to be an order of hospitallers and became purely military, although the knights who resided in these commanderies had no specific tasks.[3]

In 1490, Pope Innocent VIII suppressed the order and transferred its possessions to the Knights of St. John. Although this was confirmed in 1505 by Pope Julius II, the Order of Saint Lazarus resisted this move and the order of St. John never came into possession of this property except in Germany. In France, the Bull of suppression was ignored and French Grand Masters appointed. The order of Saint John claimed the possession of the French holdings but their claim was rejected in 1547 by the Parliament of Paris. In 1565 Pope Pius IV annulled the Bulls of his predecessors and restored all possessions to the order so that he might give the grand magistry to a favorite, Giovanni de Castiglione. But the latter did not succeed in securing the devolution of the commanderies in France. By the end of the 16th century, the order had retained a significant presence only in France and in Italy.

With the death of the papal favorite, Castiglione in 1572, the grand magistry of the order was rendered vacant and Pope Gregory XIII united the Italian branch with the Order of St. Maurice to set up the Order of Saints Lazarus and Maurice. This order was then linked in perpetuity with the Crown of Savoy and thenceforth the title of Grand Master of the Order of Sts. Maurice and Lazarus was hereditary in that house.

By the time of Pope Clement VIII the order had two houses, one at Turin, was to contribute to combats on land, while the other, at Nice, had to provide galleys to fight the Turks at sea. But when thus reduced to the states of the Duke of Savoy, the order merely vegetated until the French Revolution, which suppressed it. In 1816 the King of Sardinia, Victor Emmanuel I, re-established the titles of Knight and Commander of Sts. Maurice and Lazarus, as simple decorations, accessible without conditions of birth to both civilians and military men.[3]

This became a national order of chivalry on the unification of Italy in 1861, but has been suppressed by law since the foundation of the Republic in 1946. Since 1951 the Order has not been recognized officially by the Italian state. The House of Savoy in exile continued to bestow the Order. Today it is granted to persons eminent in the public service, science, art, letters, trade, and charitable works. 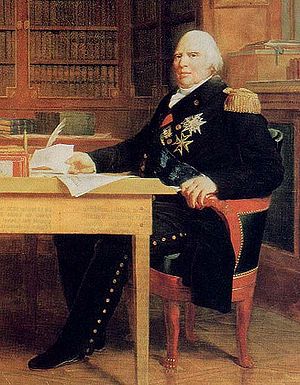 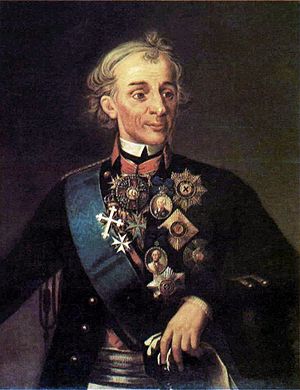 In 1154, King Louis VII of France gave the Order of Saint Lazarus a property at Boigny near Orléans which was to become the headquarters of the order outside of the Holy Land. Later, after the fall of Acre in 1291 the Knights of St. Lazarus left the Holy Land and moved first to Cyprus, then Sicily and finally back to Boigny, which had been raised to a barony in 1288. In 1308 King Philip IV of France gave the order his temporal protection.

When Pope Innocent VIII suppressed the order in 1490, The French branch of the order resisted its amalgamation with the Order of St. John and continued to elect its own Grand Masters. In 1604 Henry IV of France re-declared the French branch of the order a protectorate of the French Crown. King Henry IV, founded in 1608, with the approbation of Pope Paul V, the Order of Notre-Dame du Mont-Carmel. He then, in turn united to this new order the possessions of St. Lazarus in France, and such is the origin of the title Ordres Royaux, Militaires & Hospitaliers de Saint Lazare de Jérusalem & de Notre-Dame du Mont-Carmel réunis ("Royal, Military, and Hospitaller Orders of Our Lady of Mount Carmel and St. Lazarus of Jerusalem united"). This amalgamation eventually received canonical acceptance on 5 June 1668 by a bull issued by Cardinal Legate de Vendôme under Papal authority of Clement IX.

Unlike the situation with the Savoyian Order of Saints Maurice and Lazarus where a complete merger took place creating one order, the French branch was not completely merged with the Order of Our Lady of Mount Carmel, and the orders were managed a two separate entities, with individuals being admitted to one order but not necessarily to both [10]

During the French Revolution, a decree of 30 July 1791 suppressed all royal and knightly orders in France. Another decree the following year confiscated all the Order's properties. The Holy See, which had originally created the Order, on the other hand did not suppress the order;[citation needed] while Louis, Count of Provence, then Grand Master of the order, who later became Louis XVIII, continued to function in exile and continued admitting various dignitaries to the order.[11]

Scholars differ in their views regarding the extent to which the Order remained active during and after the French Revolution. There is however no doubt of its continuing existence during this time. In different museums, there are preserved a number of paintings of Russian and Baltic nobles, admitted to the order after 1791. In this list are general John Lamb, Prince Suvorov, count Pahlen, count Sievers etc. Some of the new knights are listed in Almanach Royal from 1814 to 1830. King Louis XVIII, the order's protector, and the duc de Châtre, the order's lieutenant-general, both died in 1824. In 1830, a royal decree caused the order to lose its royal protection in France. Charles Savona-Ventura, Grand Archivist and Historian of the Order, holds that it remained under apostolic authority since the Holy See did not promulgate any contrarius actus in respect to either of the two orders during the late eighteenth and nineteenth centuries.[12][13] However, Charles Moeller and Michael Foster maintain that the order was extinct after 1824 with the death of King Louis XVIII,[4][5] ignoring the fact that the French Almanach Royal continues to list King Charles X as the order's Protector until 1830.[6]

The current Military and Hospitaller Order of Saint Lazarus of Jerusalem maintains that after 1830 the French foundation of the Order of Saint Lazarus continued under the governance of a council of officers under the protection of the Melkite Patriarchy.[14] Documentation to the subsequent decades of the 19th-century is unavailable, but the order is documented to have been definitely active philanthropically in Haifa in the mid-18th century,[15] while contemporary biographies do mention late 19th-century individuals as having been members of the Hospitaller Nobles of St. Lazarus. Definite documentation relating the Order of Saint Lazarus appears again in 1910 with the publication of its revised statutes.[16]