Order of the Holy Spirit

Not to be confused with the Congregation of the Holy Ghost (Spiritans).

Prior to the creation of the Order of the Holy Spirit in 1578 by Henri III, the senior order of chivalry in France had been the Order of Saint Michael.[2] This order had originally been created to rival the Burgundian Order of the Golden Fleece, and to help ensure that leading French nobles remained loyal to the Crown. Its membership was initially restricted to a small number of powerful princes and nobles, but this increased dramatically due to the pressures of the Wars of Religion: at the beginning of the reign of Henry III, the order had several hundred living members, ranging from kings to bourgeois. Recognising that the order had been significantly devalued, Henry founded the Order of the Holy Spirit December 31, 1578- thereby creating a two-tier system: the new order would be reserved for princes and powerful nobles whilst the old Order of Saint Michael would be given to less eminent servants of the Crown. This Order was dedicated to the Holy Spirit to commemorate the fact that Henry was elected King of Poland (1573) and inherited the throne of France (1574) on two Pentecosts.

During the French Revolution the Order of the Holy Spirit was officially abolished by the French government along with all other chivalric orders from the Ancien Régime, although the exiled Louis XVIII continued to acknowledge it. Following the Restoration, the order was officially revived, only to be abolished again by the Orleanist Louis-Philippe following the July Revolution in 1830. Despite the abolition of the order, both the Orleanist[2] and Legitimist[3] pretenders to the French throne have continued to nominate members of the order, long after the abolition of the French monarchy itself. 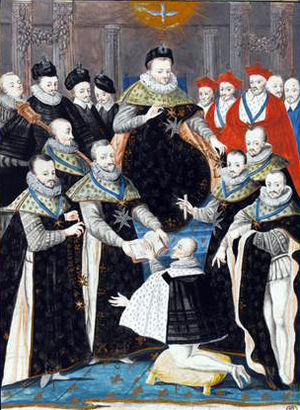 Louis Gonzaga, Duke of Nevers was the first knight to receive the order

The King of France was the Sovereign and Grand Master ("Souverain Grand Maître"), and made all appointments to the order. Members of the order can be split into three categories:

Members of the order had to be Roman Catholic, and had to be able to demonstrate three degrees of nobility. The minimum age for members was 35, although there were some exceptions: 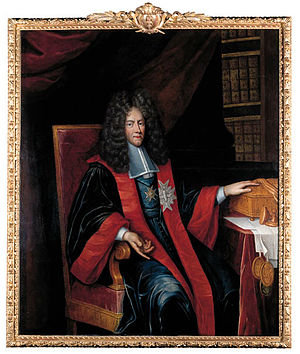 Louis Phélypeaux, comte de Pontchartrain is wearing the cross and star of the Order of the Holy Spirit

The order had its own officers. They were responsible for the ceremonies and the administration of the order.

officers of the order were as follows:

Due to the blue riband from which the Cross of the Holy Spirit was hung, the Knights became known as "Les Cordon Bleus". Over time, this expression was extended to refer to other distinctions of the highest class – for example, Cordon Bleu cooking and Blue Riband sporting events. It has been suggested that the term Cordon Bleu in cooking has derived from the splendour of feasts held by the Knights and not simply from the term becoming synonymous with prestige; however, this is not confirmed.[citation needed]

The badge of the Order is a gold Maltese cross with white borders, each of the eight points ending in a gold ball (points boutonnées) and with a gold fleur-de-lys between each adjacent pair of its arms. At the center of the cross, was set a white dove descending (i.e., with its wings and head pointing downward) surrounded by green flames. The back of this cross worn by the knights was the same as the front except with the medallion of the Order of Saint Michael at the center rather than the dove and flames (those of ecclesiastical members were the same on the back as on the front). During the ceremonies, the cross of officers and commanders officers was attached to a collar of links of gold fleur-de-lis alternating with links consisting of a white enameled letter H (the first initial of name of the founder) crowned with a gold French royal crown, with identical crowns on either side of it or alternately with a trophy of weapons. Each of these links was surrounded with red enamel flames forming a square around it.[1][2] More generally, the cross was suspended from a large ribbon of color moirée blue sky, hence the nickname cordon bleu the knights wore.

For the ceremonies of the Order and when the knights of the Order made their Communion the knights wore a long black velvet mantle sprinkled with embroidered gold and red flames and with a representation of the collar round its edges embroidered in gold, red and silver. Like the royal mantle, this mantle opened on the right side and just as an ermine shoulder cape covered the top of the royal mantle, a shoulder cape of pale green velvet with the same embroidery but smaller was worn over this mantle and formed the upper part of it. Both the mantle proper and the shoulder cape were lined with a yellowish orange satin.[3] The mantle was worn over a white coat (with the star of the Order embroidered on the left breast), waistcoat and puffed hose, heavily embroided with silver. A black hat with a white plume completed the dress. The star of the Order had the same design as the front of the badge, but embroidered in silver (later a medal star in silver was used) on both the knights' coats and their vests.