Order of the Polar Star 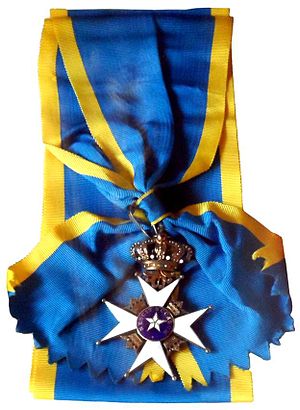 Cross and riband of a Commander Grand Cross 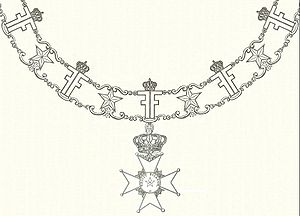 For the private order in Norway, see Order of the Polar Star (Norway).

The Order of the Polar Star was until 1975 intended as a reward for Swedish and foreign "civic merits, for devotion to duty, for science, literary, learned and useful works and for new and beneficial institutions".

Its motto is, as seen on the blue enameled centre of the badge, Nescit Occasum, a Latin phrase meaning "It knows no decline". This is to represent that Sweden is as constant as a never setting star. The Order's colour is black. This was chosen so that when wearing the black sash, the white, blue and golden cross would stand out and shine as the light of enlightenment from the black surface. The choice of black for the Order's ribbon may also have been inspired by the black ribbon of the French Order of St. Michael, which at the time the Order of the Polar Star was instituted was also awarded to meritorious civil servants. At present, the ribbon of the Order is blue with yellow stripes near the edges (i.e., the national colors, but the reverse of the Order of the Sword's yellow tibbon with blue stripes near the edges). Women and clergy men are not called knight or commander but simply as Member (Ledamot).

The Order has five degrees:

Note: ^ Clergymen and women become ledamöter (Members) instead of knights.

This order also has a medal, "the Polar Star Medal".