Order of the Starry Cross 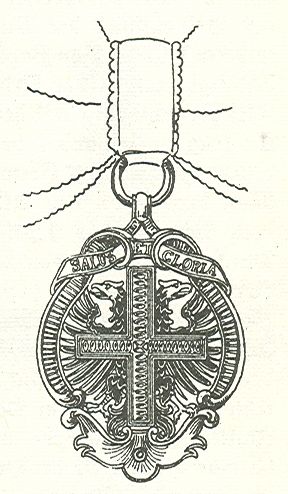 Order of the Starry Cross

The Order of the Starry Cross (or Order of the Star Cross/Star Cross Order; German: Sternkreuz-Orden) was founded by Eleanora Gonzaga of Mantua, dowager empress of the Holy Roman Empire, in 1668. This all female order was confirmed by Pope Clement IX, June 28, 1668, and was placed under the spiritual management of the Prince Bishop of Vienna. Only high-born ladies could be invested with the Order, including “princesses, countesses, and other high nobility.” Once invested, members were to “devote themselves to the service and worship of the Holy Cross, and to lead a virtuous life in the exercise of religion and works of charity.”

According to legend, the Habsburg dynasty owned a piece of the True Cross that bore Jesus of Nazareth during the Crucifixion. Though it is impossible to prove its authenticity, the holy relic was set in gold and worn by at least two Holy Roman Emperors, Maximilian II and Ferdinand III. Ferdinand III’s last consort, Empress Eleanora, was given the relic by her stepson, Emperor Leopold I, after Ferdinand’s 1657 death. In the aftermath of a fire at the Hofburg on February 2, 1668, the relic was discovered in near perfect condition. The dowager empress founded the Order in celebration that the relic had survived the fire, believing it to be a true miracle.

Members of the Order wore the following insignia:

"An oval medallion, with a broad blue enameled border, inclosing a black enameled Eagle with two heads, and claws, both of gold, on which lies a Gold Cross, enameled green, and bordered with brown wood. Over this, on an intwined (sic) wreath in black letters, on a white ground, is the motto of the Order, "Salue et Gloria” – (Hail and Glory.) It is worn, pendent to a strip of black riband (sic), on the left breast." 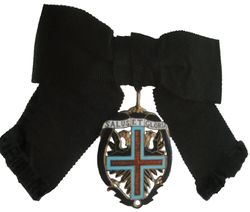 Insignia of the Order

According to the website of the Archdiocese of Vienna,[1] the order is ruled by :