From Infogalactic: the planetary knowledge core
(Redirected from Ordinariate Use)
Jump to: navigation, search 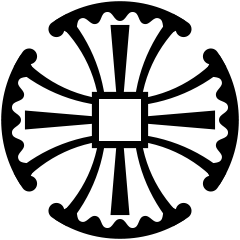 The Canterbury Cross - symbol of many[citation needed] Anglican Use Catholics

The Anglican Use is the form of liturgy found in the Book of Divine Worship authorized under the 1980 Pastoral Provision of Pope John Paul II for personal parishes in the United States founded by former members of the Episcopal Church in the United States who joined the Catholic Church while wishing to maintain some features of Anglican tradition.

These parishes were established in accordance with the Pastoral Provision granted by Pope John Paul II on 20 June 1980,[1][2] which permitted the ordination as Catholic priests of married former clergy of the Episcopal Church for service either in such personal parishes or elsewhere in Catholic dioceses of the United States.[3] They are referred to interchangeably as either "Anglican Use" or "Pastoral Provision" parishes. As of December 2015 all but two of these parishes had transitioned to the personal ordinariates.

With the retirement of the Book of Divine Worship on 1 January 2016 and the promulgation of Divine Worship: The Missal for use beginning 29 November 2015, the Anglican Use is no longer authorized and is replaced by the Divine Worship Liturgy (formerly called Ordinariate Use).[4]

The remote origins of the demand for such an arrangement has been ascribed to the Oxford Movement in nineteenth-century England.[2] More immediately the demand arose because of developments in the Episcopal Church in the United States of America in the 1970s, which began to ordain women as priests and bishops, rejected traditional teaching on human sexuality, blessed homosexual unions and ordained those who were openly living in such unions.[5]

In 1977, some of those who desired union with the Catholic Church contacted individual Catholic bishops, the Apostolic Delegate Archbishop Jean Jadot and the Congregation for the Doctrine of the Faith in Rome, to inquire about the possibility for married Anglican priests to be received into the Catholic Church and function as Catholic priests.[2]

After the United States National Conference of Catholic Bishops and the Congregation for the Doctrine of the Faith had reacted favorably to the proposals that had been put before them, a formal request for union was presented in Rome on 3 November 1979 for acceptance into the Roman Catholic Church, for steps to be taken to eliminate any defects that might be found in their priestly orders, and that they be granted the oversight, direction, and governance of a Catholic bishop. They offered the allegiance of their whole hearts and minds and souls, and also "with that allegiance the Anglican patrimony that has been ours in so far as it is compatible with, acceptable to and an enhancement of Catholic teaching and worship".[6]

The decision of the Holy See was officially communicated in a letter of 22 July 1980 from the Congregation for the Doctrine of the Faith to the president of the United States episcopal conference, who published it on 20 August 1980.[2]

Though admittance of the Episcopalians in question to the Catholic Church was considered as reconciliation of individuals, the pastoral provision gave them a common group identity.[7] After a period of being subject to the local Latin Church bishop, the bishop could set up personal parishes for them, with the use, within the group, of a form of liturgy that retained certain elements of the Anglican liturgy; and married Episcopalian priests could on a case-by-case basis be ordained as Catholic priests, but not as bishops.[5][8]

An ecclesiastical delegate, a Catholic and preferably a bishop, was to be appointed to oversee the implementation of the decision and to deal with the Congregation.[9]

In 1983, the first Anglican Use parish, Our Lady of the Atonement, was established in San Antonio, Texas. Our Lady of Walsingham parish in Houston, Texas, followed the next year.[10] Concern about ecumenical relations with the Episcopal Church prevented the Archbishop of Los Angeles from authorizing the establishment in his archdiocese of personal parishes of the kind envisaged, in spite of requests from two groups whose membership exceeded that of any of the groups for which personal parishes were set up in other dioceses. The petitioners were told that they could only be received as members of the existing ordinary Catholic parishes.[2] Since 1983 over 100 former Anglicans have been ordained for priestly ministry in various Catholic dioceses of the United States.[3][11]

The Anglican Use is an authorized liturgical variant of the Roman Rite of the Latin Church. The Latin Church includes among its liturgical rites the widespread Roman Rite, the Ambrosian Rite of Milan, the Mozarabic Rite celebrated in the Cathedral of Toledo, the Braga Rite in some parts of northern Portugal, and specific uses of religious orders. The Catholic Church also includes several Eastern Catholic churches, which are alongside the Latin Church but not within it.

The Anglican Use liturgy reflects many influences, including the Sarum Use, the English Missal, and the 1928 and 1979 versions of the Episcopal Book of Common Prayer, as well as the Roman Missal. Anglican Use liturgy and the 1962 Tridentine Latin Mass have very similar structures. Distinctive features of such Masses include 16th-century English (e.g., "thee" and "thou"), greater use of incense and bell-ringing, and English chants and hymns.[14]

The Congregation for Divine Worship gave provisional approval for the Anglican Use liturgy, the Book of Divine Worship, in 1984, an approval rendered definitive in 1987. This book incorporates elements of the 1928 Book of Common Prayer, but the Eucharistic liturgy is from the 1979 Book, with the eucharistic prayers taken from the Roman Missal and the ancient Sarum Rite (with the modern English Words of Institution inserted in the latter).[2] New texts were promulgated by the congregation on 22 June 2012, namely the Order for Funerals and the Order for the Celebration of Holy Matrimony.[15]

In 2013, a new liturgy that incorporates elements of Anglican tradition was authorized for the three personal ordinariates for former Anglicans that had been established from 2011 on. This has been described as "a different beast entirely" from the Anglican Use. The Anglican Use was based closely on the United States Episcopal Church liturgy, which had developed in ways different from that of Anglican churches in England and Australia, making it unsuitable for imposing on all personal ordinariates for former Anglicans. Its Order of Mass draws elements from the original Book of Common Prayer, from different later versions of it, from the Tridentine Mass and from the Roman Rite as revised after the Second Vatican Council.[16]

Divine Worship: The Missal, the missal containing the complete expression of the Divine Worship Liturgy, will begin to be used on 29 November 2015, and as of 1 January 2016 the Anglican Use and the Book of Divine Worship will no longer be authorized in public worship.