From Infogalactic: the planetary knowledge core
Jump to: navigation, search
For the village within Valsolda, see Oria, Lombardy.

Oria (or Orra, Greek: Ὑρία - Hyria, Οὐρία - Uria[2]) is a town and comune in the Apulia region, in the province of Brindisi, in southern Italy. It is the see city of the Roman Catholic Diocese of Oria.

In classical times, Oria was known as Hyria (Uria) or Hyrium, a city in ancient Messapia and one of the principal Messapian cities. It was just north of the ancient town Manduria, at some distance southwest of Brundisium, and southeast of Taras/Tarentum; corresponding to the location of the modern town. 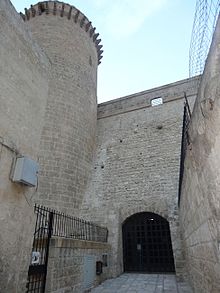 According to Herodotus (7.170), it was founded by the Messapians (who according to Herodotus were originally Cretans) sometime after the abortive siege of the Sicanian city Camicus. Between 217 and 84 BC the city was minting its own coins. The coins often feature Iapagus, the Iapygian national hero.

Further information: History of the Jews in Italy

Oria had one of the oldest Jewish communities in Europe. Jewish scholarship in Oria included the study of philosophy, the Talmud, languages such as Greek and Latin, and medicine and natural sciences. It was home to Shabbethai Donnolo, one of the first Hebrew writers who was native to Europe.

Ten scholars in the community were killed when Arabs under Abu Ahmad Ja'far ibn 'Ubaid conquered Oria in 925. This was the beginning of the end of Jewish presence in Oria; the last relic was an epitaph produced in 1035. It is likely, however, that Jews were living in Oria until the 15th century.

Jewish scholar and writer Shabbethai Donnolo was born in Oria in 913.

The neoclassisictic writer Francesco Milizia was born in Oria in 1725.