The Oriental Crisis of 1840 was an episode in the Egyptian–Ottoman War in the eastern Mediterranean, triggered by the self-declared Khedive of Egypt and Sudan Muhammad Ali Pasha's aims to establish a personal empire in the Ottoman province of Egypt.

In the preceding decades, Muhammad Ali had expanded and strengthened his hold on Ottoman territory, beginning with Egypt where he acted as a viceroy for the Sultan. Called upon to assist the Ottomans in the Greek War of Independence, Muhammad Ali in return demanded parts of Ottoman Syria to be transferred to his personal rule. When the war ended and the Porte didn't live up to its promise, Muhammad Ali launched a military campaign against his Ottoman masters and easily took most of the Syrian lands.

On the verge of total collapse and defeat to Muhammad Ali, an alliance of European powers comprising Britain, the Austrian Empire, Prussia and Russia decided to intervene on behalf of the young Sultan Abdülmecid I.

By the Convention of London, signed on 15 July 1840, these Great Powers offered Muhammad Ali and his heirs permanent control over Egypt (and Sudan) and the Eyalet of Acre, provided that these territories would nominally remain part of the Ottoman Empire. If he did not accept withdrawal of his forces within ten days he should lose the offer in southern Syrian; if he delayed acceptance more than 20 days, he should forfeit everything offered.[2] The European powers agreed to use all possible means of persuasion to effect the agreement, but Muhammad Ali hesitated, believing in support from the Kingdom of France.[3]

The French under the newly formed cabinet of Prime Minister Adolphe Thiers sought to increase French influence in North Africa following their conquest of Algeria. For this, supporting Muhammad Ali's so far successful revolt seemed suitable. Counter Admiral Julien Pierre Anne Lalande was dispatched to the Mediterranean to eventually join forces with the defected Ottoman fleet.[4] But France became politically isolated when the other Great Powers backed up the Sultan, and Thiers wasn't prepared to bring the country into open war with Britain. France switched sides and aligned against Muhammad Ali in October 1840. 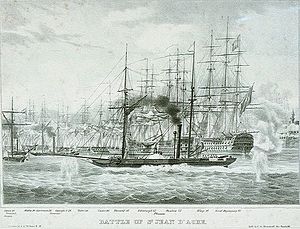 HMS Phoenix in the bombardment of Acre, 1840

In September 1840, the European powers eventually moved from diplomatic means to military action. When French support for Muhammad Ali failed to materialize, British and Austrian naval forces in the eastern Mediterranean moved against Syria and Alexandria.[5]

Alexandria was the port where the defecting Ottoman fleet had withdrawn. After the Royal Navy and the Austrian Navy first blockaded the Nile delta coastline, they moved east to shell Sidon and Beirut on 11 September 1840. British and Austrian forces then attacked Acre. Following the bombardment of the city and the port on 3 November 1840 a small landing party of Austrian, British and Ottoman troops (which were led personally by the Austrian fleet commander, Archduke Friedrich) took the citadel after Muhammad Ali's Egyptian garrison in Acre had fled.

After the surrender of Acre, Muhammad Ali finally accepted the terms of the Convention on 27 November 1840. He renounced his claims over Crete and the Hijaz and agreed to downsize his naval forces and his standing army to 18,000 men, provided that he and his descendants would enjoy hereditary rule over Egypt and Sudan — an unheard-of status for an Ottoman viceroy.[6] The firmans, subsequently issued by the sultan, indeed confirmed Muhammad Ali's rule over Egypt and the Sudan. He withdrew from Syria, Hijaz, the Holy Land, Adana, and Crete, and handed back the Ottoman fleet.