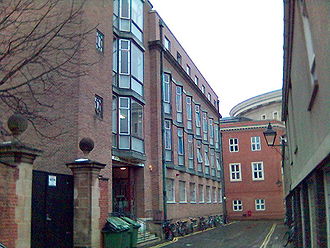 The Oriental Institute building on Pusey Lane, Oxford. The rotunda of the Sackler Library can be seen in the background.

The Oriental Institute (commonly referred to as the O.I.) of the University of Oxford, England, is home to the university's Faculty of Oriental Studies. It is engaged in research and teaching of a wide range of disciplines covering modern and historical Asian languages and culture. The Oriental Institute's main building is located on Pusey Lane behind the Ashmolean Museum and Sackler Library, but some parts of the faculty have their own buildings elsewhere in and around Oxford. The institute has its own library, which covers most of the ground floor and basement of the building. The Oriental Institute Library (known as OIL internally) is both a lending library and a reading room of the Bodleian Library.

The faculty is divided into three sub-faculties based on subject area. They are: