Original Poetry by Victor and Cazire 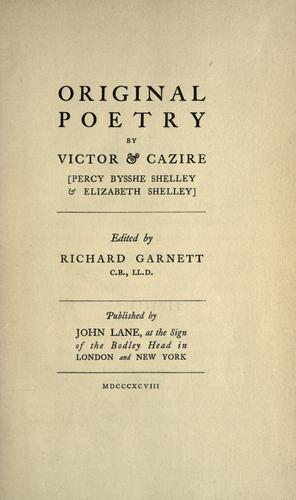 Original Poetry by Victor and Cazire was a poetry collection published anonymously by Percy Bysshe Shelley in September 1810 by C. and W. Phillips in Worthing and sold by publisher John Joseph Stockdale. The work was Shelley's first published volume of poetry. Shelley wrote the poems in collaboration with his sister Elizabeth.[1] It was written before Shelley entered the University of Oxford. The volume consisted of sixteen poems and a fragment of a poem. Shelley wrote eleven of the poems while Elizabeth wrote five. Shelley contributed seven lyrical poems, four Gothic poems, and the political poem "The Irishman's Song". Elizabeth wrote three lyrical poems and two verse epistles. The collection included the early poems "Revenge", "Ghasta, Or, The Avenging Demon!!!", "Song: Sorrow", and "Song: Despair". The epigraph was from the "Lay of the Last Minstrel" by Sir Walter Scott: "Call it not vain:— they do not err, Who say, that, when the poet dies, Mute Nature mourns her worshipper."

Controversy surrounded the work, however, because one of the poems included, "Saint Edmond's Eve", was written by Matthew Gregory Lewis and originally appeared in Tales of Terror (1801).[2] Shelley told Stockdale that his sister Elizabeth had included the Lewis poem. Shelley apologised and informed Stockdale to suppress the volume.[3] Fourteen hundred and eighty copies had been printed and one hundred copies had been circulated.[4] Fearing a plagiarism lawsuit, Stockdale withdrew the work from publication. Copies of the work became extremely rare and it lapsed into obscurity.

The volume was advertised in the Morning Chronicle of 18 September, the Morning Post of 19 September, and The Times of 12 October 1810. Reviews appeared in Literary Panorama, The Anti-Jacobin Review, The British Critic, and The Poetical Register. The reviews, which primarily focused on Elizabeth's poems, were negative and highly critical. Literary Panorama dismissed the poems as examples of "nonsensical rhyme". The British Critic review described the volume as "filled up by songs of sentimental nonsense, and very absurd tales of horror." The Poetical Register called the poems "downright scribble" and a "waste of paper", dismissing "all this sort of trash".[5]

Original Poetry by Victor and Cazire had an impact on Frankenstein; or, The Modern Prometheus (1818). In her biography of Mary Shelley, Anne Kostelanetz Mellor noted the influence of the work on the latter novel:

The theme of unremitting vengeance is also common to both works. "Revenge" and "Ghasta, Or, The Avenging Demon!!!" rely on the theme of revenge. The Being similarly seeks revenge against Victor Frankenstein. John V. Murphy noted in The Dark Angel: Gothic Elements in Shelley's Works that the revenge motif was a major theme of Shelley's writings: "The idea of an avenging demon is central in Shelley's poetry and, in diverse form, will appear in almost all of the major works."[7] Revenge is the major theme of Zastrozzi (1810), Posthumous Fragments of Margaret Nicholson (1810), and The Cenci (1819).

The language of the two works is also similar. In the poem "Revenge", line 20, the narrator exclaims: "Alone will I glut its all conquering maw." In Frankenstein, the Being expresses a similar sentiment: "I will glut the maw of death."