From Infogalactic: the planetary knowledge core
Jump to: navigation, search
This article is about the cultural landscape. For other uses, see Orkhon.

Orkhon Valley Cultural Landscape (Mongolian: Орхоны хөндийн соёлын дурсгал) sprawls along the banks of the Orkhon River in Central Mongolia, some 320 km west from the capital Ulaanbaatar. It was inscribed by UNESCO in the World Heritage List as representing evolution of nomadic pastoral traditions spanning more than two millennia. (See List of World Heritage Sites in Mongolia) 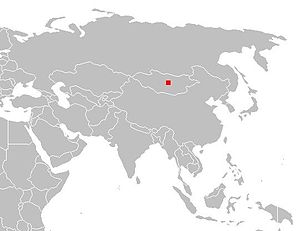 For many centuries, the Orkhon Valley was viewed as the seat of the imperial power of the steppes. The first evidence comes from a stone stele with runic inscriptions, which was erected in the valley by Bilge Khan, an 8th-century ruler of the Göktürk Empire. Some 25 miles to the north of the stele, in the shadow of the sacred forest-mountain Ötüken, was his Ördü, or nomadic capital. During the Qidan domination of the valley, the stele was reinscribed in three languages, so as to record the deeds of a Qidan potentate.

Mountains were considered sacred in Tengriism as an axis mundi, but Ötüken was especially sacred because the ancestor spirits of the khagans and beys resided here. Moreover, a force called qut was believed to emanate from this mountain, granting the khagan the divine right to rule the Turkic tribes.[1] Whoever controlled this valley was considered heavenly appointed leader of the Turks and could rally the tribes. Thus control of the Orkhon Valley was of the utmost strategic importance for every Turkic state. Historically every Turkic capital (Ördü) was located here for this exact reason. There were many houses by the bank but they are all gone now.

The main monuments of the Orkhon Valley are as follows: 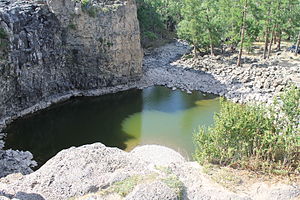