Orlando Health/Amtrak, also known as Orlando, is a train station in Orlando, Florida. It is served by Amtrak, the national railroad passenger system of the United States, and SunRail, the commuter rail service of Greater Orlando, as well as local and intercity buses. It serves Amtrak's Silver Meteor and Silver Star lines. Built in 1926, the historic station is located approximately one mile south of Downtown Orlando near the campus of Orlando Health. 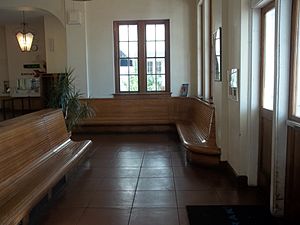 Part of the restored interior.

In 2014, the City of Orlando started a project to build a second platform for use by the new SunRail commuter rail service. Unlike most SunRail stations, which feature shelters consisting of white aluminum poles supporting sloped green roofs, the station's canopies feature arches that resemble the mission-style architecture of the adjacent historic station's canopy. It also includes ticket vending machines, ticket validators, emergency call boxes, drinking fountains, separate platforms designed for passengers in wheelchairs. The station was officially named Orlando Health/Amtrak Station due to its proximity to the main Orlando Health hospital campus, Orlando Regional Medical Center, the Arnold Palmer Hospital for Children and the Winnie Palmer Hospital for Women & Babies.[4] The revamped station opened on May 1, 2014.[5]

In August 2014, the City of Orlando announced a $2.1 million station restoration project of the historic building. The project, which was the first major renovation to the facility since 1990, included fixing cracks and leaks in the stucco walls and tile roof, pavement repairs, restroom upgrades, repainting of the building exterior, restoration of the original 1926 wood doors and windows, replacement and relocation of the air conditioning system to the roof of the building (which allowed the original entrance on the side of the building to be reopened), and the installation of a wheelchair ramp from the parking lot to the new station entrance.[6] Work officially commenced on September 24, 2014 and was completed on June 29, 2015.[7][8]

The station is also serves the Amtrak Thruway Motorcoach bus and Lynx bus route 40. It is also the proposed terminus on the planned Orange Blossom Express commuter rail project out of Lake County.