From Infogalactic: the planetary knowledge core
Jump to: navigation, search
For other uses, see Orphan (disambiguation). 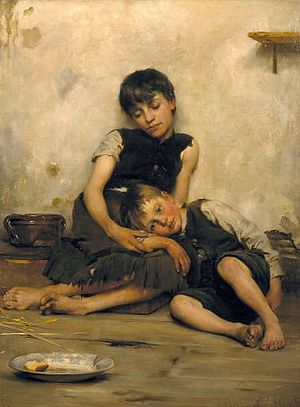 An orphan (from the Greek ορφανός orfanós[1]) is a child whose parents are dead or have abandoned them permanently.[2][3] In common usage, only a child who has lost both parents is called an orphan. When referring to animals, only the mother's condition is usually relevant. If she has gone, the offspring is an orphan, regardless of the father's condition.[4]

Adults can also be referred to as orphan, or adult orphans. However, survivors who reached adulthood before their parents died are normally not called orphans. It is a term generally reserved for children whose parents have died while they are too young to support themselves.

Various groups use different definitions to identify orphans. One legal definition used in the United States is a minor bereft through "death or disappearance of, abandonment or desertion by, or separation or loss from, both parents".[5]

In the common use, an orphan does not have any surviving parent to care for him or her. However, the United Nations Children's Fund (UNICEF), Joint United Nations Programme on HIV and AIDS (UNAIDS), and other groups label any child that has lost one parent as an orphan. In this approach, a maternal orphan is a child whose mother has died, a paternal orphan is a child whose father has died, and a double orphan has lost both parents.[6] This contrasts with the older use of half-orphan to describe children that had lost only one parent.[7] 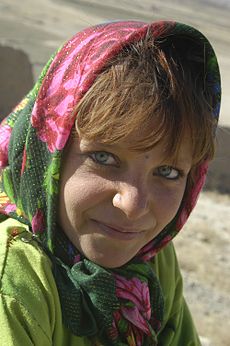 A young Afghan girl at a Kabul, Afghanistan orphanage in January 2002.

Orphans are relatively rare in developed countries, because most children can expect both of their parents to survive their childhood. Much higher numbers of orphans exist in war-torn nations such as Afghanistan.

Famous orphans include world leaders such as Nelson Mandela and Andrew Jackson; the Hebrew prophet Moses and the Muslim prophet Muhammad; writers such as Edgar Allan Poe, and Leo Tolstoy. The American orphan Henry Darger portrayed the horrible conditions of his orphanage in his art work. Other notable orphans include entertainment greats such as Louis Armstrong, Marilyn Monroe, Babe Ruth, Ray Charles and Frances McDormand, and innumerable fictional characters in literature and comics.

Wars and great epidemics, such as AIDS, have created many orphans. The Second World War, with its massive numbers of deaths and population movements, created large numbers of orphans—with estimates for Europe ranging from 1,000,000 to 13,000,000. Judt (2006) estimates there were 9,000 orphaned children in Czechoslovakia, 60,000 in the Netherlands 300,000 in Poland and 200,000 in Yugoslavia, plus many more in the Soviet Union, Germany, Italy and elsewhere.[14] 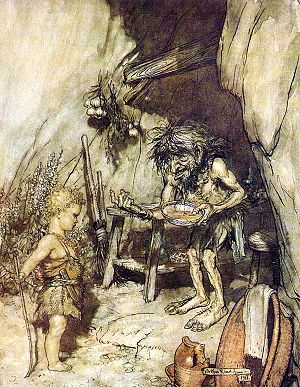 Mime offers food to the young Siegfried, an orphan he is raising; Illustration by Arthur Rackham to Richard Wagner's Siegfried

Orphaned characters are extremely common as literary protagonists, especially in children's and fantasy literature.[15] The lack of parents leaves the characters to pursue more interesting and adventurous lives, by freeing them from familial obligations and controls, and depriving them of more prosaic lives. It creates characters that are self-contained and introspective and who strive for affection. Orphans can metaphorically search for self-understanding through attempting to know their roots. Parents can also be allies and sources of aid for children, and removing the parents makes the character's difficulties more severe. Parents, furthermore, can be irrelevant to the theme a writer is trying to develop, and orphaning the character frees the writer from the necessity to depict such an irrelevant relationship; if one parent-child relationship is important, removing the other parent prevents complicating the necessary relationship. All these characteristics make orphans attractive characters for authors.

Orphans are common in fairy tales, such as most variants of Cinderella.

A number of well-known authors have written books featuring orphans. Examples from classic literature include Charlotte Brontë's Jane Eyre, Charles Dickens's Oliver Twist, Mark Twain's Tom Sawyer, L. M. Montgomery's Anne of Green Gables, Thomas Hardy's Jude the Obscure, and J. R. R. Tolkien's The Lord of the Rings. Among more recent authors, A. J. Cronin, Lemony Snicket, A. F. Coniglio, Roald Dahl and J. K. Rowling, as well as some less well-known authors of famous orphans like Little Orphan Annie have used orphans as major characters. One recurring storyline has been the relationship that the orphan can have with an adult from outside his or her immediate family as seen in Lyle Kessler's play Orphans.

Orphans are especially common as characters in comic books. Almost all the most popular heroes are orphans: Superman, Batman, Spider-Man, Robin, The Flash, Captain Marvel, Captain America, and Green Arrow were all orphaned. Orphans are also very common among villains: Bane, Catwoman, and Magneto are examples. Lex Luthor, Deadpool, and Carnage can also be included on this list, though they killed one or both of their parents. Supporting characters befriended by the heroes are also often orphans, including the Newsboy Legion and Rick Jones.

In the 1936 Rainbow Parade cartoon, A Waif's Welcome, we see an orphan boy whose voice sounds like Our Gang kid Carl "Alfalfa" Switzer's voice, but is not voiced by him. It is known that Switzer was not an American voice actor because he was an American actor and singer.[clarification needed]

All of the orphan children from the 1936 Color Classic, Christmas Comes But Once a Year produced by Fleischer Studios, were voiced by Mae Questel.

Many religious texts, including the Bible and the Quran, contain the idea that helping and defending orphans is a very important and God-pleasing matter. Two of the most important religious leaders, Moses and Muhammad, were orphaned as children. Several scriptural citations describe how orphans should be treated: