Oruç Reis (Turkish: Oruç Reis; Arabic: عروج بربروس‎‎; Spanish: Arrudye; c. 1474–1518) He was Ottoman Bey (governor) of Algiers and Beylerbey (chief governor) of the West Mediterranean and the elder brother of Hayreddin Barbarossa. He was born on the Ottoman island of Midilli (Lesbos in modern Greece) and was killed in a battle with the Spanish at Tlemcen in the Ottoman Eyalet of Algeria.

He became known as Baba Oruç or Baba Aruj (Father Oruç) when he transported large numbers of Morisco and Jewish refugees from Spain to North Africa; he was known through folk etymology in Europe as Barbarossa (which means Redbeard in Italian).

All four brothers became seamen, engaged in marine affairs and international sea trade. Oruç was the first brother to be involved in seamanship, soon joined by the youngest brother Ilyas. Hizir initially helped their father in the pottery business, but later obtained a ship of his own and also began a career at sea. Ishak, the eldest, remained on Mytilene and was involved with the financial affairs of the family business. The other three brothers initially worked as sailors, but then turned privateers in the Mediterranean, counteracting the privateering of the Knights Hospitaller of the Island of Rhodes.[citation needed] Oruç and Ilyas operated in the Levant, between Anatolia, Syria and Egypt, while Hızır operated in the Aegean Sea and based his operations mostly in Thessaloniki.

Oruç was a very successful seaman. He also learned to speak Italian, Spanish, French, Greek and Arabic in the early years of his career. While returning from a trading expedition in Tripoli, Lebanon, he and Ilyas were attacked by a galley of the Knights Hospitaller. Ilyas was killed in the fight, and Oruç was wounded. Their father's boat was captured, and Oruç was taken prisoner and detained in the Knights' Bodrum Castle for nearly three years. Upon learning the location of his brother, Hizir went to Bodrum and managed to help Oruç escape. 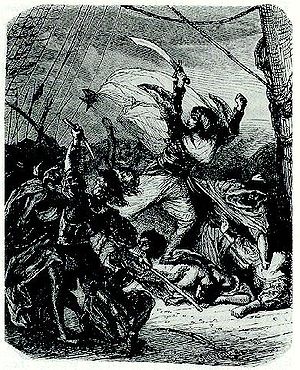 Oruç later went to Antalya, where he was given 18 galleys by Şehzade Korkut, an Ottoman prince and governor of the city, and charged with fighting against the Knights Hospitaller who inflicted serious damage on Ottoman shipping and trade. In the following years, when Shehzade Korkud became governor of Manisa, he gave Oruç a larger fleet of 24 galleys at the port of İzmir and ordered him to participate in the Ottoman naval expedition to Apulia in the Kingdom of Naples, where Oruç bombarded several coastal forts and captured two ships. On his way back to Lesbos, he stopped at Euboea and captured three galleons and another ship. Reaching Mytilene with these captured vessels, Oruç learned that Shehzade Korkud, brother of the new Ottoman sultan, had fled to Egypt in order to avoid being killed because of succession disputes—a common practice at that time in the House of Osman. Fearing trouble due to his well-known association with the Ottoman prince in exile, Oruç sailed to Egypt where he met Shehzade Korkud in Cairo and managed to get an audience with the Mamluk Sultan Qansuh al-Ghawri, who gave him another ship and charged him to raid the coasts of Italy and the islands of the Mediterranean that were controlled by Christian powers. After passing the winter in Cairo, he set sail from Alexandria and operated along the coasts of Liguria and Sicily.

In 1503, Oruç managed to seize three more ships and made the island of Djerba his new base, thus moving his operations to the Western Mediterranean. Hızır joined Oruç at Djerba. In 1504 the two brothers asked Abu Abdullah Mohammed Hamis, sultan of Tunisia from the Beni Hafs dynasty, for permission to use the strategically located port of La Goulette for their operations. They were granted this right, with the condition of leaving one third of their booty to the sultan. Oruç, in command of small galliots, captured two much larger Papal galleys near the island of Elba. Later, near Lipari, the two brothers captured a Sicilian warship, the Cavalleria, with 380 Spanish soldiers and 60 Spanish knights from Aragon on board, who were on their way from Spain to Naples. In 1505 they raided the coasts of Calabria. These accomplishments increased their fame and they were joined by a number of other well-known Muslim corsairs, including Kurtoğlu (known in the West as Curtogoli). In 1508 they raided the coasts of Liguria, particularly Diano Marina.

In 1509, Ishak also left Mytilene and joined his brothers at La Goulette. The fame of Oruç increased when between 1504 and 1510 he transported Muslim Mudéjars from Christian Spain to North Africa. His efforts of helping the Muslims of Spain in need and transporting them to safer lands earned him the honorific name Baba Oruç (Father Oruç), which eventually— due to the similarity in sound— evolved in Spain, Italy and France into Barbarossa (Redbeard in Italian).

In 1510, the three brothers raided Cape Passero in Sicily and repulsed a Spanish attack on Bougie, Oran and Algiers. In August 1511 they raided the areas around Reggio Calabria in southern Italy. In August 1512 the exiled ruler of Bougie invited the brothers to drive out the Spaniards, and during the battle Oruç lost his left arm. This incident earned him the nickname Gümüş Kol (Silver Arm in Turkish), in reference to the silver prosthetic device which he used in place of his missing limb. Later that year the three brothers raided the coasts of Andalusia in Spain, capturing a galliot of the Lomellini family of Genoa who owned the Tabarca island in that area. They subsequently landed on Minorca and captured a coastal castle, and then headed towards Liguria and captured four Genoese galleys near Genoa. The Genoese sent a fleet to liberate their ships, but the brothers captured their flagship as well. After capturing a total of 23 ships in less than a month, the brothers sailed back to La Goulette.

There they built three more galliots and a gunpowder production facility. In 1513 they captured four English ships on their way to France, raided Valencia where they captured four more ships, and then headed for Alicante and captured a Spanish galley near Málaga. In 1513 and 1514 the three brothers engaged Spanish squadrons on several other occasions and moved to their new base in Cherchell, east of Algiers. In 1514, with 12 galliots and 1,000 Turks, they destroyed two Spanish fortresses at Bougie, and when a Spanish fleet under the command of Miguel de Gurrea, viceroy of Majorca, arrived for assistance, they headed towards Ceuta and raided that city before capturing Jijel in Algeria, which was under Genoese control. They later captured Mahdiya in Tunisia. Afterwards they raided the coasts of Sicily, Sardinia, the Balearic Islands and the Spanish mainland, capturing three large ships there. In 1515 they captured several galleons, a galley and three barques at Majorca. Still in 1515 Oruç sent precious gifts to the Ottoman Sultan Selim I who, in return, sent him two galleys and two swords embellished with diamonds. In 1516, joined by Kurtoğlu, the brothers besieged the Castle of Elba, before heading once more towards Liguria where they captured 12 ships and damaged 28 others.

In 1516 the three brothers succeeded in liberating Jijel and Algiers from the Spaniards, but eventually assumed control over the cities and surrounding region, forcing the previous ruler, Abu Hamo Musa III of the Beni Ziyad dynasty, to flee.[citation needed] The local Spaniards in Algiers sought refuge in the island of Peñón near Algiers and asked Emperor Charles V, King of Spain, to intervene, but the Spanish fleet failed to force the brothers out of Algiers.

After consolidating his power and declaring himself the new Sultan of Algiers, Oruç sought to enhance his territory inlands and took Miliana, Medea and Ténès. He became known for attaching sails to cannons for transport through the deserts of North Africa. In 1517 the brothers raided Capo Limiti and later the Island of Capo Rizzuto in Calabria.

For Oruç the best protection against Spain was to join the Ottoman Empire, his homeland and Spain's main rival. For this he had to relinquish his title of Sultan of Algiers to the Ottomans. He did this in 1517 and offered Algiers to the Ottoman Sultan. The Sultan accepted Algiers as an Ottoman Sanjak (province), appointed Oruç as the Bey (Governor) of Algiers and Beylerbey (Chief Governor) of the West Mediterranean, and promised to support him with janissaries, galleys and cannons.

Final engagements and death of Oruç and Ishak

The Spaniards ordered Abu Zayan, whom they had appointed as the new ruler of Tlemcen and Oran, to attack Oruç by land, but Oruç learned of the plan and pre-emptively struck against Tlemcen, capturing the city and executing Abu Zayan in the Fall of Tlemcen (1517). The only survivor of Abu Zayan's dynasty was Sheikh Buhammud, who escaped to Oran and called for Spain's assistance.

In May 1518, Emperor Charles V arrived at Oran and was received there by Sheikh Buhammud and the Spanish governor of the city, Diego de Córdoba, Marquess of Comares, who commanded a force of 10,000 Spanish soldiers. Joined by thousands of Bedouins, the Spaniards marched overland on Tlemcen where Oruç and Ishak awaited them with 1,500 Turkish and 5,000 Moorish soldiers. They defended Tlemcen for 20 days, but were eventually killed in combat by the forces of Garcia de Tineo.

The last remaining brother, Hizir Reis, inherited his brother's place, his name (Barbarossa) and his mission.

Oruç established the Ottoman presence in North Africa which lasted four centuries, de facto until the loss of Algeria to France in 1830, of Tunisia to France in 1881, of Libya to Italy in 1912 and de jure until the official loss of Egypt and Sudan to the United Kingdom in 1914, after the Ottoman Empire joined World War I on the side of the Central Powers. The Republic of Turkey officially renounced the remaining disputed Turkish rights in some territories of Egypt and Sudan with the Treaty of Lausanne in 1923.

Barbarossa was the influence behind the character Captain Hector Barbossa from the movie Pirates of the Caribbean. It was revealed that co-star Johnny Depp played a decisive part in providing the name. His last name is both a pun on the surname of Spanish origin "Barbosa"[13] and is based on Barbarossa, the Ottoman privateer. The word is a combination of the Italian words barba (beard) and rossa (red).