Orval Eugene Faubus (January 7, 1910 – December 14, 1994) was an American politician who served as 36th Governor of Arkansas from 1955 to 1967. A Democrat, he is best known for his 1957 stand against the desegregation of the Little Rock School District during the Little Rock Crisis, in which he defied a unanimous decision of the U.S. Supreme Court by ordering the Arkansas National Guard to stop black students from attending Little Rock Central High School.

Faubus was born to Sam Faubus (1887–1966) and the former Addie Joslen in the Combs community near Huntsville, the county seat of Madison County in northwestern Arkansas.[1] He was born prematurely and weighed only 4 lb (1.8 kg) at birth. According to his father, "Little Orval was different from most boys. Kids liked to get into mischief, but all he ever did was read books. He never done anything if he couldn't do it perfectly. You'd never find a weed in his row of corn."[citation needed]

Faubus' first political race was in 1936 when he contested a seat in the Arkansas House of Representatives, a race in which he finished second. He was urged to challenge the result but declined, which earned him the gratitude of the Democratic Party. As a result, he was elected circuit clerk and recorder of Madison County, a post he held for two terms.[2]

When the United States entered World War II, Faubus joined the United States Army and served as an intelligence officer with the Third Army of General George Patton. He rose to the rank of major and was in combat several times. His book, In This Faraway Land, documents the military period of his life. He was active in veterans' causes for the remainder of his life.

When Faubus returned from the war, he cultivated ties with leaders of Arkansas' Democratic Party, particularly with progressive reform Governor Sid McMath, leader of the post-war "GI Revolt" against corruption, under whom he served as director of the state's highway commission. Meanwhile, conservative Francis Cherry defeated McMath's bid for a third term in the 1952 Democratic primary. Cherry became unpopular with voters, and Faubus challenged him in the 1954 primary.

Faubus rejected his father's radicalism for the more mainline New Deal, a pragmatic move. He was elected governor as a liberal Democrat. A moderate on racial issues, his political realism resurfaced as he adopted racial policies that were palatable to influential white voters in the Delta region as part of a strategy to effect key social reforms and economic growth in Arkansas.[3]

In the 1954 campaign, Faubus was compelled to defend his attendance at the defunct northwest Arkansas Commonwealth College in Mena, as well as his early political upbringing. Commonwealth College had been formed by leftist academic and social activists, some of whom later were revealed to have had close ties with the Communist Party of the United States of America. Most of those who attended and taught there were idealistic young people who sought an education or, in the case of the faculty, a job which came with room and board.[4] During the runoff, Cherry and his surrogates accused Faubus of having attended a "communist" school and implied that his sympathies remained leftist. Faubus at first denied attending, and then admitted enrolling "for only a few weeks". Later, it was shown that he had remained at the school for more than a year, earned good grades, and was elected student body president. Faubus led a group of students who testified on behalf of the college's accreditation before the state legislature. Nevertheless, efforts to paint the candidate as a communist sympathizer backfired in a climate of growing resentment against such allegations. Faubus hence narrowly defeated Cherry to win the Democratic gubernatorial nomination. Relations were cool between the two men for years, but when Cherry died in 1965, Faubus put politics aside and was magnanimous in praising his predecessor.[4]

In the 1954 general election campaign against Little Rock Mayor Pratt C. Remmel, Faubus secured the endorsement of the previous 1950 and 1952 Republican gubernatorial nominee, Jefferson W. Speck, a planter from Mississippi County in eastern Arkansas.[5] Faubus defeated Remmel by a 63% to 37% percent margin. Remmel, a businessman and scion of a prominent Republican family, polled the strongest vote at the time for a GOP candidate since Reconstruction.

The 1954 election made Faubus sensitive to attacks from the political right. It has been suggested that this sensitivity contributed to his later stance against integration when he was challenged by segregationist elements within his own party. Faubus was known as a particularly effective one-on-one campaigner and was said to have never turned away anyone who sought to shake his hand, no matter how much time it took. 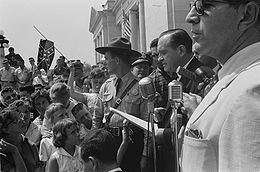 Faubus' name became internationally known during the Little Rock Crisis of 1957, when he used the National Guard to stop African Americans from attending Little Rock Central High School as part of federally ordered racial desegregation. His strong stand on this issue may seem surprising considering Faubus' 1954 run for governor as a progressive candidate promising to increase spending on schools and roads. During the first few months of his administration, Faubus desegregated state buses and public transportation[citation needed] and began to investigate the possibility of introducing multi-racial schools.[citation needed]

In 1956, Faubus easily blocked a primary election challenge from State Senator James D. Johnson of Conway, the segregationist leader of the Arkansas Democratic Party. Johnson's wife, Virginia Morris Johnson, made campaign speeches for her husband and later became the first woman (1968) to seek the office of Arkansas governor.[6] By the start of 1957, Faubus in his second term had obtained legislative passage of a controversial tax to increase teacher salaries.

Critics have long charged that Faubus' fight in Little Rock against the 1954 Brown v. Board of Education decision by the U.S. Supreme Court that separate schools were inherently unequal was politically motivated. The ensuing battle helped to shield him from the political fallout from the tax increase and to diminish Johnson's appeal. Journalist Harry Ashmore (who won a Pulitzer Prize for his columns on the subject) portrayed the fight over Central High as a crisis manufactured by Faubus. Ashmore said that Faubus used the Guard to keep blacks out of Central High School because he was frustrated by the success his political opponents were having in using segregationist rhetoric to arouse white voters.

Faubus' decision led to a showdown with President Dwight D. Eisenhower and former Governor Sid McMath. In October 1957, Eisenhower federalized the Arkansas National Guard and ordered them to return to their armories which effectively removed them from Faubus' control. Eisenhower then sent elements of the 101st Airborne Division to Arkansas to protect the black students and enforce the Federal court order. Arkansas National Guard later took over protection duties from the 101st Airborne Division. In retaliation, Faubus shut down Little Rock high schools for the 1958–1959 school year. This is often referred to as "The Lost Year" in Little Rock.[7]

Though Faubus later lost general popularity as a result of his stand against desegregation, at the time he was included among the "Ten Men in the World Most Admired by Americans", according to Gallup's most admired man and woman poll for 1958. This dichotomy was later summed up as follows: Faubus was both the "best loved" and "most hated" of Arkansas politicians of the second half of the twentieth century.

Faubus was elected governor to six two-year terms and hence served for twelve years. He maintained a defiant, populist image, while he shifted toward a less confrontational stance with the federal government, particularly during the administrations of Presidents John F. Kennedy and Lyndon B. Johnson, with each of whom he remained cordial, and both of whom carried Arkansas.

In 1960, Faubus defeated Attorney General Bruce Bennett in the Democratic gubernatorial primary for and then crushed the Republican choice, Henry M. Britt, an attorney from Hot Springs, to secure reelection. Faubus polled 292,064 votes (69.2%) to Britt's 129,921 (30.8%). In the presidential election contest, however, Democrat John F. Kennedy won Arkansas over the Republican Richard M. Nixon by less than expected. Britt was later a circuit judge in Garland County from 1967 to 1983.

In 1962, Faubus broke with the White Citizens' Councils and other groups, who preferred, but did not officially endorse, U.S. Representative Dale Alford in that year's gubernatorial primary.[8] Faubus cast himself as a moderate, he completely ignored the race issue during the 1962 election campaign, and barely secured a majority over Alford, McMath, and three other candidates. He then handily defeated the Republican Willis Ricketts, a then 37-year-old pharmacist from Fayetteville in the general election.[4]

While he was still an outcast from black leaders, Faubus nevertheless won a large percent of the black vote. In 1964, when he defeated the Republican Winthrop Rockefeller by a 57-43 percent margin, Faubus secured 81 percent of the black vote. He even collected a share of the base Republican vote from the conservative party members who had sided with former Republican state chairman William L. Spicer of Fort Smith, an intraparty rival of Rockefeller.

Faubus chose not to run for re-election to a seventh term in what would likely have been a difficult race in 1966. Former gubernatorial candidate James D. Johnson, by then an elected Arkansas Supreme Court Justice, narrowly won the Democratic nomination over another justice, the moderate Frank Holt. Johnson was then defeated in the general election by Rockefeller, who became the state's first GOP governor since Reconstruction. Ironically, years later, Johnson himself became a Republican and supported Governor Frank D. White, later a benefactor of Faubus.[4]

In 1968, Faubus was among five people considered for the vice-presidential slot of third-party presidential candidate George Wallace. However, in light of the public perception of both as segregationists, Wallace ended up selecting retired General Curtis LeMay.

During the 1969 season, Faubus was hired by new owner Jess Odom to be general manager of his Li'l Abner theme park in the Ozark Mountains, Dogpatch USA. According to newspaper articles, Faubus was said to have commented that managing the park was similar to running state government because some of the same tricks applied to both.

Faubus sought the governorship again in 1970, 1974, and 1986 but was defeated in the Democratic primaries by Dale Bumpers, David Pryor, and Bill Clinton, respectively, each of whom went on to defeat Republican opponents. In the 1970 race, two other Democratic candidates in the running, Joe Purcell and Hayes McClerkin, failed to make the runoff, and Bumpers barely edged Purcell for the chance to face Faubus directly. In his last race, 1986, Faubus polled 174,402 votes (33.5 percent) to Clinton's 315,397 (60.6 percent).

Faubus' decline occurred when the Democrats reformed their own party in response to public acceptance of the progressive polices followed by Rockefeller. Thus, a new generation of popular Democratic candidates easily contrasted themselves favorably in voters' minds with Faubus' old-style politics and a more conservative Republican Party which followed Rockefeller's tenure in the state.[citation needed]

In 1976, a report surfaced that Arkansas Republican leaders had approached Faubus about running for governor that year against Pryor, but both Faubus and the GOP denied the claim. The GOP instead ran the 40-year-old Pine Bluff plumber Leon Griffith as its sacrificial lamb candidate against Pryor, who won the second of his two gubernatorial terms with more than 80 percent of the ballots.[9]

Faubus died of prostate cancer on December 14, 1994, and is interred at the Combs Cemetery in Combs, Arkansas.[10][1]