Oscar I of Sweden 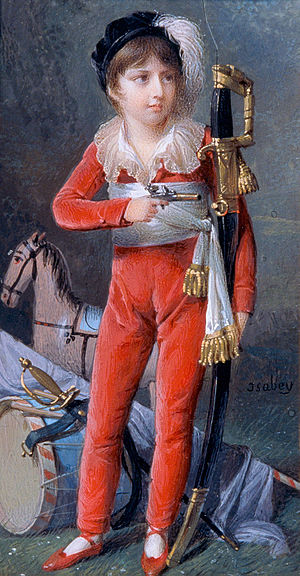 Little Oscar Bernadotte a few years before being chosen with his father to be Swedish royalty.

Oscar I (born Joseph François Oscar Bernadotte; 4 July 1799 – 8 July 1859) was King of Sweden and Norway from 1844 to his death. When, in August 1810, his father Jean-Baptiste Bernadotte was elected Crown Prince of Sweden, Oscar and his mother moved from Paris to Stockholm (June 1811). Oscar's father was the first ruler of the current House of Bernadotte. Oscar's mother was Désirée Clary, Napoleon Bonaparte's first fiancée. Her sister, Julie Clary, was married to Napoleon's brother, Joseph Bonaparte. Désirée chose Napoleon to be Oscar's godfather.

From Charles XIII of Sweden, on the day of the royal adoption of his father, Oscar received the style of Royal Highness and the title of Duke of Södermanland. He quickly acquired the Swedish language. By the time he reached the age of majority he had become a general favourite.[citation needed] He had an excellent education, and he soon came to be regarded as an authority on all socio-political questions.[citation needed] On January 17, 1816, he was elected an honorary member of the Royal Swedish Academy of Sciences, and in 1818, he was appointed chancellor of Uppsala University, where he spent one semester.

In 1832-34 he completed the opera Ryno, the errant knight left unfinished on the death of the young composer Eduard Brendler. In 1839 he wrote a series of articles on popular education, and (in 1841) an anonymous work, "Om Straff och straffanstalter", advocating prison reforms. Twice during his father's lifetime he was viceroy of Norway. By proxy at the Leuchtenberg Palace in Munich on 22 May 1823 and in person at a wedding ceremony conducted in Stockholm on 19 June 1823 he married the Princess Josephine, daughter of Eugène de Beauharnais, Duke of Leuchtenberg, and granddaughter of the Empress Josephine. [1]

Oscar's father had selected four princesses as candidates for marriage, in order of his priority:[2]

In 1824 and 1833, the Crown Prince was briefly Viceroy of Norway. In 1838 the king began to suspect his son of plotting with the Liberal politicians to bring about a change of ministry, or even his own abdication. If Oscar did not actively assist the Opposition on this occasion, his disapprobation of his father's despotic behaviour was notorious, though he avoided an actual rupture. Yet his liberalism was of the most cautious and moderate character, as the Opposition, shortly after his accession (8 March 1844), discovered to their great chagrin. He would not hear of any radical reform of the cumbrous and obsolete Constitution of 1809. But one of his earliest measures was to establish freedom of the press. He also passed the first law towards gender equality in Sweden when he in 1845 declared that brothers and sisters should have equal inheritance, unless there was a will. 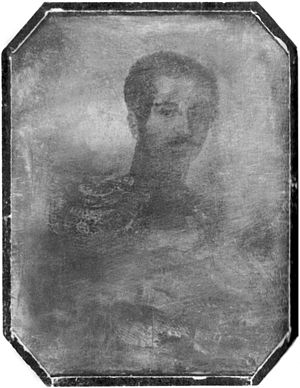 Daguerreotype of Oscar I in 1844; this is the first known photograph of a Swedish monarch.

He formally established equality between his two kingdoms by introducing new flags with the common Union badge of Norway and Sweden and a new coat of arms for the union. He also founded the Royal Norwegian Order of St. Olav on August 21, 1847, giving his Norwegian kingdom its own order of chivalry. Most of the legislation during Oscar I's reign aimed at improving the economic position of Sweden, and the Riksdag of the Estates, in its address to him in 1857, declared that he had promoted the material prosperity of the kingdom more than any of his predecessors.[3]

In foreign affairs Oscar I was a friend of the principle of nationality. In 1848 he supported Denmark against the Kingdom of Prussia in the First War of Schleswig; placed Swedish and Norwegian troops in cantonments in Funen and North Schleswig (1849–1850); and mediated the Truce of Malmö (26 August 1848). He was also one of the guarantors of the integrity of Denmark (the London Protocol, 8 May 1852).[1]

As early as 1850 Oscar I had conceived the plan of a dynastic union of the three Scandinavian kingdoms, but such difficulties presented themselves that the scheme had to be abandoned.[4] He succeeded, however, in reversing his father's obsequious policy towards Imperial Russia. His fear lest Russia should demand a stretch of coast along the Varanger Fjord induced him to remain neutral during the Crimean War, and, subsequently, to conclude an alliance with Great Britain and the Second French Empire (25 November 1855) for preserving the territorial integrity of Sweden-Norway.[1]

He was the 968th Knight of the Order of the Golden Fleece in Spain.

Oscar I left five legitimate children – four sons and one daughter. Two of his sons, Charles and Oscar, succeeded him to the throne.

Oscar also had two sons (unofficially called the Princes of Lapland) by his mistress, the actress Emilie Högquist:[5]

With another mistress, Jaquette Löwenhielm (née Gyldenstolpe), Oscar had a daughter

Oscar I was in part responsible for the international popularisation of the Irish male given name Oscar, which was given to him by his godfather, Napoleon, who had been an admirer of the Ossianic poetry of James Macpherson. Oscar I is also the dedicatee of Robert Schumann's Second Symphony which was published in 1847.