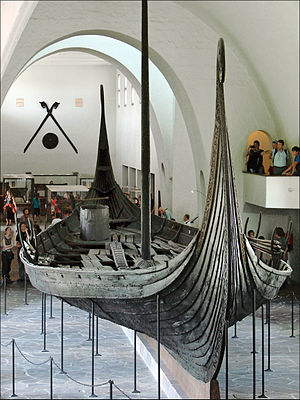 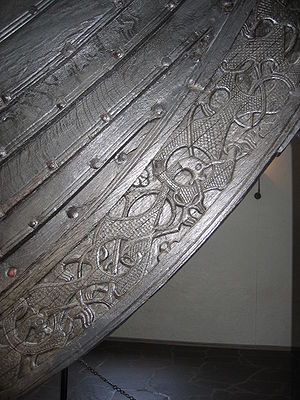 Detail from the Oseberg ship 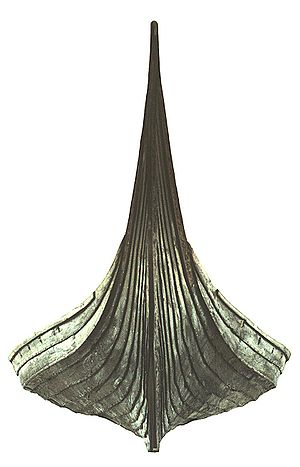 View from the front.

The Oseberg ship (Norwegian: Osebergskipet) is a well-preserved Viking ship discovered in a large burial mound at the Oseberg farm near Tønsberg in Vestfold county, Norway.[1]

The Oseberg burial mound (Norwegian: Oseberghaugen ved Slagen from the Old Norse word haugr meaning kurgan mound or barrow) contained numerous grave goods and two female human skeletons. The ship's interment into its burial mound dates from 834 AD, but parts of the ship date from around 800, and the ship itself is thought to be older.[1] It was excavated by Norwegian archaeologist Haakon Shetelig and Swedish archaeologist Gabriel Gustafson in 1904-1905. This ship is widely celebrated and has been called one of the finest finds to have survived the Viking Age.[2] The ship and some of its contents are displayed at the Viking Ship Museum, in Bygdøy.

The ship is a clinker built "karv" ship built almost entirely of oak. It is 21.58 m long and 5.10 m broad, with a mast of approximately 9–10 m. With a sail of c. 90 m², the ship could achieve a speed up to 10 knots. The ship has 15 pairs of oar holes, which means that 30 people could row the ship. Other fittings include a broad steering oar, iron anchor, gangplank, and a bailer. The bow and stern of the ship are elaborately decorated with complex woodcarvings in the characteristic "gripping beast" style, also known as the Oseberg style. Although seaworthy, the ship is relatively frail, and it is thought to have been used only for coastal voyages. The boat has low freeboard, with the topsides slightly flared. In sections the shape is similar to a hard chine with a distinct change of angle at the waterline and slack bilges. There is very little rounding in the sections, meaning the displacement is low for the length of the hull compared to the Gokstad ship, which has more rounded sections. The unsuitability of the design for ocean travel has been shown by the sinking of a modern facsimile twice during moderate weather. The main reasons appear to be the lack of freeboard, especially forward where the hollow (concave) bow sections are very fine and lack the displacement necessary when the ship is driven down wind, even by the limited sail area. After the first sinking the mast was moved further aft, and the sail area was reduced to stop the bow from being driven under. This was insufficient to prevent a second sinking.

During the debate on whether to move the original ship to a new proposed museum, thorough investigations were made into the possibilities of moving the ship without damaging it. During this process, very thorough photo scans and laser scans of both the outside and inside of the ship were made. In 2004 a new attempt to build a copy of the Oseberg ship was launched. A collective effort of Norwegian and Danish professional builders, scientist and volunteers engaged in this new attempt with the photo scans and laser scans made available for free to the enthusiastic builders. During this new attempt it was discovered that during the initial restoration of the ship a breach in one of the beams was made and the ship was therefore inadvertently shortened. This fact had not been discovered prior. It is believed this is perhaps the prime reason why several earlier replicas sank: previous attempts at working replicas had failed due to lack of correct data. In 2010, a new build was started called Saga Oseberg. Using timber from Denmark and Norway and utilizing traditional building methods from the Viking age this newest Oseberg ship was successfully completed. On the 20th of June 2012 the new ship was launched from the city of Tønsberg. The ship floated very well and in March 2014 it was taken to open seas, with Færder as its destination, under full sail. A speed of 10 knots was achieved. The construction was a huge success, the ship performing very well. It proved once and for all that the Oseberg ship really could sail, had sailed and was not just a burial chamber on land.[3][4][5] 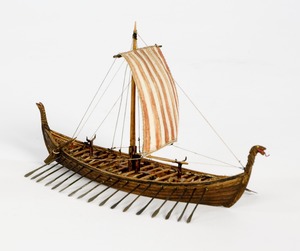 Model of Oseberg Ship in Maritime Museum in Stockholm, Sweden.

The skeletons of two women were found in the grave with the ship. One, probably aged 60–70, suffered badly from arthritis and other maladies. The second was initially believed to be aged 25–30, but analysis of tooth-root translucency suggests she was older (aged 50–55).[6] It is not clear which one was the more important in life or whether one was sacrificed to accompany the other in death. The younger woman had a broken collarbone, initially thought to be evidence that she was a human sacrifice, but closer examination showed that the bone had been healing for several weeks. The opulence of the burial rite and the grave-goods suggests that this was a burial of very high status. One woman wore a very fine red wool dress with a lozenge twill pattern (a luxury commodity) and a fine white linen veil in a gauze weave, while the other wore a plainer blue wool dress with a wool veil, possibly showing some stratification in their social status. Neither woman wore anything entirely made of silk, although small silk strips were appliqued onto a tunic worn under the red dress.[7]

Dendrochronological analysis of timbers in the grave chamber dates the burial to the autumn of 834.[8] Although the high-ranking woman's identity is unknown, it has been suggested that she is Queen Åsa of the Yngling clan, mother of Halfdan the Black and grandmother of Harald Fairhair. Recent tests of the women's remains suggest that they lived in Agder in Norway, as had Queen Åsa.[9] This theory has been challenged, however, and some think that she may have been a völva. There were also the skeletal remains of 14 horses, an ox, and three dogs found on the ship.

According to Per Holck of Oslo University, the younger woman's mitochondrial haplogroup was discovered to be U7. Her ancestors came to Norway from the Pontic littoral, probably Iran.[10] Three subsequent studies failed to confirm these results, however, and it is likely that the bone samples contain little (if any) original DNA or have been contaminated through handling.[11] Examinations of fragments of the skeletons have provided more insight into their lives. The younger woman's teeth showed signs that she used a metal toothpick, a rare 9th century luxury. Both women had a diet composed mainly of meat, another luxury when most Vikings ate fish. However, there was not enough DNA to tell if they were related, for instance a queen and her daughter.[12] 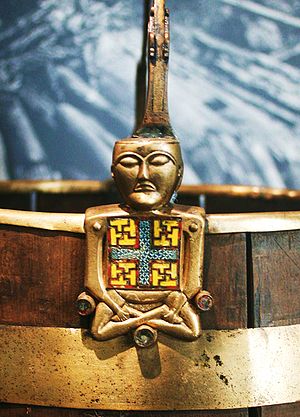 The so-called "Buddha bucket" (Buddha-bøtte), a brass and cloisonné enamel ornament of a bucket (pail) handle in the shape of a figure sitting with crossed legs.

The grave had been disturbed in antiquity, and precious metals were absent. Nevertheless, a great number of everyday items and artifacts were found during the 1904-1905 excavations. These included four elaborately decorated sleighs, a richly carved four-wheel wooden cart, bed-posts, and wooden chests, as well as the so-called "Buddha bucket" (Buddha-bøtte), a brass and cloisonné enamel ornament of a bucket (pail) handle in the shape of a figure sitting with crossed legs. The bucket is made from yew wood, held together with brass strips, and the handle is attached to two anthropomorphic figures compared to depictions of the Buddha in the lotus posture, although any connection is most uncertain. More relevant is the connection between the patterned enamel torso and similar human figures in the Gospel books of the Insular art of the British Isles, such as the Book of Durrow. More mundane items such as agricultural and household tools were also found. A series of textiles included woolen garments, imported silks, and narrow tapestries. The Oseberg burial is one of the few sources of Viking age textiles, and the wooden cart is the only complete Viking age cart found so far. A bedpost shows one of the few period examples of the use of what has been dubbed the valknut symbol.[13]

Ship to remain at current location

The conservation of the wooden artifacts is an ongoing problem.[14] On May 3, 2011, thirteen years after debate began over the disposition of the ship,[15] Norwegian Minister of Education Kristin Halvorsen stated that the ship will not be moved from Bygdøy.