From Infogalactic: the planetary knowledge core
Jump to: navigation, search
For other uses, see Osella (disambiguation).

Osella is an Italian racing car manufacturer and former Formula One team. They participated in 132 Grands Prix between 1980 and 1990. They achieved two points finishes and scored 5 championship points. 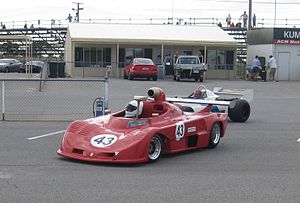 Osella placed second in the 1977 World Championship for Sports Cars with the Osella PA5 BMW.

Named after its founder Vincenzo "Enzo" Osella, the team began life by racing Abarth sports cars in local and national races in the mid 1960s in Italy. Though relatively successful (Osella eventually took over the factory Abarth sports car program), Osella expanded into single seater racing in 1974 to further develop his business. The team would rise to Formula Two in 1975 achieving some success with its own car (the Osella FA2); François Migault scored one point.

Osella Corse made another attempt in 1976 in the same league with unchanged material but by now the team was not competitive. Additionally, the team suffered from severe financial problems which meant that the works team was withdrawn from Formula Two in the middle of 1976. In the following years the Osella FA2s were occasionally entered by privateers, one of them being the Swiss Charly Kiser.

Enzo Osella tried to make some money by selling a self-penned Formula 3 car (Osella FA3) with little success. Only a few privateers (one of them being Giorgio Francia who later would drive Osella's Formula One car) were optimistic enough to buy that simple untested machine. The cars ran with Toyota or Lancia engines in the 1976 German and Italian F3 championships without making any great impression. After this unsuccessful attempt, the racing activities of Osella Corse nearly came to an end. The team attended some local sports car events but avoided any single seater races from 1976 to 1978.

Osella had to wait until the beginning of 1979 when the former Hesketh and Theodore Racing Grand Prix driver Eddie Cheever was persuaded to race the well-used FA2 once again in a Formula Two championship. Surprisingly, the red car was good enough to win three races. This was enough for Enzo Osella to take the plunge into the cut and thrust world of Formula One.

While the F2-Osella was entered on one occasion in 1980 by the Italian privateer Marco Rocca, Osella Squadra Corse appeared in the world of Grand Prix racing with its first Formula 1 machine, the FA1. The car was designed by Giorgio Stirano. Powered by Ford Cosworth DFV, it was overweight and aerodynamically inefficient. The car was presented in a blue and white livery with large Denim branding on the sidepods. Many components were manufactured in-house which meant that they were cheap to produce but not always state-of-the-art. The driver was again Eddie Cheever who was able to finish just one race in whole season. Frequently, he had to suffer from the massive unreliability of his car. In the following seasons, the basic design was changed several times.

In the early years, most of the work was done by interim designers like Giorgio Valentini or Tony Southgate, but frequently Enzo Osella himself also worked on the cars. Most of these attempts brought no improvement as high tech solutions could not be financed. . Jean-Pierre Jarier finished fourth at Imola in 1982 (where only 14 cars started) and scored the first Championship points for the young team in a car that was by now dubbed Osella FA1C.

Despite this result, neither the financial nor the technical situation improved. Few sponsors were attracted by the tiny Italian team. Denim only stayed for the first two seasons, Kelemata was no more reliable, and others like Landis & Gyr vanished as quickly as they had come. Most of the other sponsors were small or mid-size companies from Turin or the region of Piemont.

The lack of funding led to frequent driver changes as the team demanded that their drivers bring significant sponsorship to keep the team afloat. Some drivers started a career at Osella, such as Alex Caffi and Nicola Larini. Others disappeared as quickly as they had come (such as Franco Forini or Allen Berg). Enzo Osella gave the young Austrian Jo Gartner his one and only chance to drive a Formula One car in 1984. Riccardo Paletti also had high hopes but was killed in a startline accident at the 1982 Canadian Grand Prix.

None of these drivers was able to push the team ahead. Finally, Osella Corse continued to live hand-to-mouth each year with little or no improvement in competitiveness. 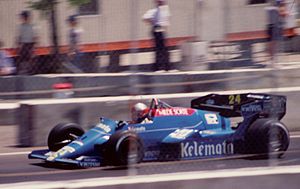 In the mid 1980s, Osella was the beneficiary of factory Alfa Romeo engines (both in normally aspirated (1983) and turbo (1984–1988) forms). On one hand, the Alfa engine program helped the team to survive the increasingly professional turbo era. On the other hand, the heavy, unreliable and thirsty machines contributed to the team's lack of competitiveness. At least in the beginning, Alfa offered some technical input to the small Turin team; the 1984 Osella (the model FA1F) was based on the 1983 works Alfa Romeo 183T, which had been loaned to the team for "design assistance" purposes. All the following Osella models up to the FA1I in 1988 had their origins in the initial Alfa design.

The Alfa engine was not reliable. Chargers blew off regularly and power output had to be reduced down to the level of the non-turbo cars just to achieve the necessary reliability. Osella more than once tried to replace the Alfa engines with more up-to-date Motori Moderni-Turbos (which Minardi did not support) or with Cosworth engines. In the end, both solutions were too expensive so Osella had to stay with his out-dated but cheap Alfa engines.

For the 1988 season, the team re-branded Alfa Romeo 890T as the "Osella V8" for the final year before turbo engines were banned from 1989. This came about after Alfa's parent company Fiat grew tired of the negative publicity the unsuccessful team had given their engine, and while allowing the team to continue using the engine, refused to allow the Alfa Romeo name to be used.

After driver Nicola Larini managed some impressive times in testing at Monza before the season started (with top speeds of around 300 km/h (186 mph)), the team were quietly confident of a decent showing through the season as many teams had switched to the naturally aspirated engines in preparation for 1989. However, the reality was that the Osella FA1L with its outdated V8 turbo was not up to the challenge (like all Osellas to that point, the car also had its aerodynamic origins in Alfa's 1983 factory car, the 183T). The talented Larini often failed to qualify or even pre-qualify, and even being excluded from the San Marino Grand Prix before practice after failing to get through scrutineering due to illegal changes made to the chassis. At the end of the season team owner Enzo Osella was more than happy to be finally rid of the old Alfa engine.

The 1989 season saw much improvement. The all new, Cosworth DFR powered Osella FA1M was a big step ahead, and ultra-sticky qualifying tyres from Pirelli brought some success, at least in the qualifying sessions. In the Japanese Grand Prix where Nicola Larini qualified 10th. The fine qualifying performance brought no results in the races; the Osella cars almost never saw the finish line due to several technical failures. The most tragic race was the Canadian Grand Prix in which Larini was third before the FA1M's electrics failed due to water ingress. Piercarlo Ghinzani re-joined the team for 1989 with limited success, often failing to qualify. He announced his retirement at the season ending Australian Grand Prix. While Larini failed to start the very wet race when his electrics were water-logged on the grid, Ghinzani's race and career came to a violent end after an unsighted Nelson Piquet in his Lotus hit the Osella at high speed. Piquet was lucky to escape injury as a wheel hit his helmet, while Ghinzani limped away having banged his ankle.

In 1990, after 10 years in Formula One and still without any meaningful sponsorship, Enzo Osella sold shares in his team to metalwork magnate Gabriele Rumi as part of a sponsorship deal with the Fondmetal company. During 1990, the team entered a single car for French driver Olivier Grouillard who unfortunately gained a reputation in F1 for being what BBC commentator James Hunt called a "notorious blocker", a driver who generally ignored flags and his mirrors and regularly held up the faster cars. At the end of 1990, Rumi took over the remainder of the team and renamed it Fondmetal. 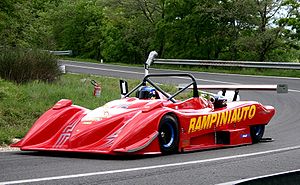 The involvement of Gabriele Rumi meant the end of Enzo Osella's activities in Formula One. Instead he concentrated on the thing he knew best: sports car racing. During his Formula One years, he never gave up building sports cars; in fact this was one of the few projects that regularly brought money to Volpiano. A few of those sports cars even found their way to the Can Am series, although without much success. The most prestigious result was during the 1984 Can Am season with a third place in the championship for the 2-litre class; the car was the Osella PA10 driven by Armando Trentini, and was the only two-seater in the championship; the rest of the 2-litre class field comprised single-seater F2 cars with covered wheels. In the 1990s, Osella moved to Atella in the south of Italy where he built a new ultra-modern facility to produce some very competitive sports cars. Many of them were sold to privateers, while others were entered in several classes by the Osella works team. The works team was particularly successful in hillclimb races. In 1995 for instance works team driver Pasquale Irlando won all 9 races of the European hillclimb championship using the Osella PA18. He won the title in 1997, 1998 and 1999 consecutively. His successor Fabio Danti died in one of Osella's cars when he was competing in the 2000 Championship. Hillclimb stars like Franz Tschager and Martin Krisam continue to use Osella cars.

Nowadays, the factory was transferred back near Turin, in Verolengo and continue activity building sport cars for hill climbing and minor sport race championship.

‡ Not eligible for points.