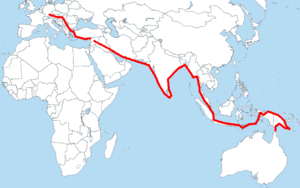 A map showing Oskar Speck's route from Germany to Australia

Oskar Speck (1907–1995) was a German canoeist who paddled by folding kayak from Germany to Australia over the period 1932-1939. A Hamburg electrical contractor made unemployed during the Weimar-period Depression, he left Germany to seek work in the Cypriot copper mines, departing from Ulm and travelling south via the Danube. En route, he changed plan and decided to "see the world", continuing to Australia via the Middle East, India, and Southeast Asia. On his arrival in Australia, shortly after the start of World War II, Speck was interned as an enemy foreigner. He remained in prisoner-of-war camps for the duration of the war. On release, Speck worked as an opal cutter at Lightning Ridge, before moving to Sydney and establishing a successful career as an opal merchant.[1][2] In later life he lived with his partner, Nancy Steel, in Killcare, New South Wales.[3]