From Infogalactic: the planetary knowledge core
Jump to: navigation, search
Not to be confused with Osseoincorporation.

Osseointegration derives from the Greek osteon, bone, and the Latin integrare, to make whole. The term refers to the direct structural and functional connection between living bone and the surface of a load-bearing artificial implant. Osseointegration has enhanced the science of medical bone and joint replacement techniques as well as dental implants and improving prosthetics for amputees.

Osseointegration is also defined as: "the formation of a direct interface between an implant and bone, without intervening soft tissue".[1] Osseointegrated implant is a type of implant defined as "an endosteal implant containing pores into which osteoblasts and supporting connective tissue can migrate".[2] Applied to oral implantology, this thus refers to bone grown right up to the implant surface without interposed soft tissue layer. No scar tissue, cartilage or ligament fibers are present between the bone and implant surface. The direct contact of bone and implant surface can be verified microscopically.

Osseointegration may also be defined as : 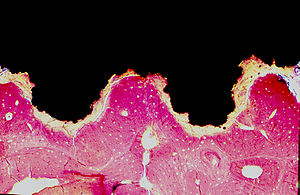 Osseointegration was first observed—albeit not explicitly stated—by Bothe, Beaton, and Davenport in 1940.[3][4] Bothe et al. were the first researchers to implant titanium in an animal and remarked how it had the tendency to fuse with bone.[3][4] Bothe et al. reported that due to the elemental nature of the titanium, its strength, and its hardness, it had great potential to be used as future prosthesis material.[3][4] Osseointegration was later described by Gottlieb Leventhal in 1951.[3][5] Leventhal placed titanium screws in rat femurs and remarked how "At the end of 6 weeks, the screws were slightly tighter than when originally put in; at 12 weeks, the screws were more difficult to remove; and at the end of 16 weeks, the screws were so tight that in one specimen the femur was fractured when an attempt was made to remove the screw. Microscopic examinations of the bone structure revealed no reaction to the implants. The trabeculation appeared to be perfectly normal."[3][5] The reactions described by Leventhal and Bothe et al. would later be coined into the term "osseointegration" by Per-Ingvar Brånemark. In 1952, Per-Ingvar Brånemark of Sweden conducted an experiment where he utilized a titanium implant chamber to study blood flow in rabbit bone. At the conclusion of the experiment, when it became time to remove the titanium chambers from the bone, he discovered that the bone had integrated so completely with the implant that the chamber could not be removed. Brånemark called this "osseointegration," and, like Bothe et al. and Leventhal before him, saw the possibilities for human use.[3][4][5]

In dental medicine the implementation of osseointegration started in the mid-1960s as a result of Brånemark's work.[6][7][8][9] In 1965 Brånemark, who was at the time Professor of Anatomy at the University of Gothenburg, placed dental implants into the first human patient - Gösta Larsson. This patient had a cleft palate defect and required implants to support a palatal obturator. Gösta Larsson died in 2005, with the original implants still in place after 40 years of function.[10]

In the mid-1970s Brånemark entered into a commercial partnership with the Swedish defense company Bofors to manufacture dental implants and the instrumentation required for their placement. Eventually an offshoot of Bofors, Nobel Pharma, was created to concentrate on this product line. Nobel Pharma subsequently became Nobel Biocare.[10]

Brånemark spent almost 30 years fighting the scientific community for acceptance of osseointegration as a viable treatment. In Sweden he was often openly ridiculed at scientific conferences. His university stopped funding for his research, forcing him to open a private clinic to continue the treatment of patients. Eventually an emerging breed of young academics started to notice the work being performed in Sweden. Toronto's George Zarb, a Maltese-born Canadian prosthodontist, was instrumental in bringing the concept of osseointegration to the wider world. The 1983 Toronto Conference is generally considered to be the turning point, when finally the worldwide scientific community accepted Brånemark's work. Today osseointegration is a highly predictable and commonplace treatment modality.[10] More recently since 2010 Al Muderis in Sydney Australia utilised a high tensile strength titanium implant with high prose plasma sprayed surface as an intramedullary prosthesis that is inserted into the bone residuum of amputees and then connect through an opening in the skin to a robotic limb prosthesis. This allows amputees to mobilise with more comfort and less energy consumption. Al Muderis also published the first series of combining osseointegration prosthesis with Joint replacement enabling below knee amputees with knee arthritis or short residual bone to mobilise without the need of a socket prosthesis.[11]

On December 7th 2015, two Operation Iraqi Freedom/Operation Enduring Freedom veterans, Bryant Jacobs and Ed Salau, will be the first in America to get a percutaneous osseointegrated prosthesis.[12] During the first stage, doctors at Salt Lake Veterans Affairs Hospital will embed a titanium stud in the femur of each patient. About six weeks later, they will go back and attach the docking mechanism for the prosthesis.

Osseointegration is a dynamic process in which characteristics of the implant (i.e. macrogeometry, surface properties, etc.) play a role in modulating molecular and cellular behavior. While osseointegration has been observed using different materials, it is most often used to describe the reaction of bone tissues to titanium, or titanium coated with calcium phosphate derivatives.[13] It was previously thought that titanium implants were retained in bone through the action of mechanical stabilization or interfacial bonding. Alternatively, calcium phosphate coated implants were thought to be stabilized via chemical bonding. It is now known that both calcium phosphate coated implants and titanium implants are stabilized chemically with bone, either through direct contact between calcium and titanium atoms, or by the bonding to a cement line-like layer at the implant/bone interface.[14][15] While there are some differences (e.g. like the lack of chondrogenic progenitors), osseointegration occurs through the same mechanisms as bone fracture healing.[16][17]

For osseointegrated dental implants, metallic, ceramic, and polymeric materials have been used,[2] in particular titanium.[18] To be termed osseointegration the connection between the bone and the implant need not be 100 percent, and the essence of osseointegration derives more from the stability of the fixation than the degree of contact in histologic terms. In short it represents a process whereby clinically asymptomatic rigid fixation of alloplastic materials is achieved, and maintained, in bone during functional loading.[19] Implant healing times and initial stability are a function of implant characteristics. For example, implants utilizing a screw-root form design achieve high initial mechanical stability through the action of their screws against the bone. Following placement of the implant, healing typically takes several weeks or months before the implant is fully integrated into the surrounding bone. First evidence of integration occurs after a few weeks, while more robust connection is progressively effected over the next months or years.[20] Implants that possess a screw-root form design result in bone resorption followed by interfacial bone remodeling and growth around the implant.[21]

Though the osseointegrated interface becomes resistant to external shocks over time, it may be damaged by prolonged adverse stimuli and overload, which may result in implant failure.[23][24] In studies performed using "Mini dental implants," it was noted that the absence of micromotion at the bone-implant interface was necessary to enable proper osseointegration.[25] Further, it was noted that there is a critical threshold of micromotion above which a fibrous encapsulation process occurs, rather than osseointegration.[26]

Since 2005, a number of orthopedic device manufacturers have introduced products that feature porous metal construction.[29][30][31] Clinical studies on mammals have shown that porous metals, such as titanium foam, may allow the formation of vascular systems within the porous area.[32] For orthopedic uses, metals such as tantalum or titanium are often used, as these metals exhibit high tensile strength and corrosion resistance with excellent biocompatibility.

The process of osseointegration in metal foams is similar to that in bone grafts. The porous bone-like properties of the metal foam contribute to extensive bone infiltration, allowing osteoblast activity to take place. In addition, the porous structure allows for soft tissue adherence and vascularization within the implant. These materials are currently deployed in hip replacement, knee replacement and dental implant surgeries.

23. Trabecular Metal Material: The Next Best Thing to BoneTM: http://www.trabecularmetal.zimmerdental.com/Implant/imp_home.aspx