The Ossetians or Ossetes (Ossetian: ир, ирæттæ, ir, irættæ; дигорæ, дигорæнттæ, digoræ, digorænttæ) are an Iranian ethnic group of the Caucasus Mountains, indigenous to the region known as Ossetia.[12][13][14] They speak Ossetic, an Iranian language of the Eastern branch of the Indo-European languages family, with most also fluent in Russian as a second language. The Ossetians are mostly Eastern Orthodox Christian, with a Muslim minority.

The Ossetians and Ossetia received their name from the Russians, who adopted the Georgian designations Osi (sing., pl.: Osebi) and Oseti ("the land of Osi"), used since the Middle Ages for the Iranian-speaking population of the Central Caucasus and probably based on the old Alan self-designation "As". As the Ossetians lacked any single inclusive name for themselves in their native language, these terms were accepted by the Ossetians themselves already before their integration into the Russian Empire.[15]

This practice was put into question by the new Ossetian nationalism in the early 1990s, when the dispute between the Ossetian subgroups of Digoron and Iron over the status of the Digoron dialect made the Ossetian intellectuals search for a new inclusive ethnic name. This, combined with the effects of the Georgian-Ossetian conflict, led to the popularization of "Alania", the name of the medieval Sarmatian confederation, to which the Ossetians traced their origin, and inclusion of this name into the official republican title of North Ossetia in 1994.[15]

The folk beliefs of the Ossetian people are rooted in their Sarmatian origin and Christian religion, with the pagan gods transcending into Christian saints. The Nart saga serves the basic pagan mythology of the region.[16] 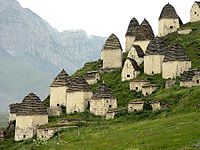 Charnel vaults at a necropolis near the village of Dargavs, North Ossetia

The Ossetians descend from the Alans,[17] a Sarmatian tribe (Scythian subgroup of the Iranian ethnolinguistic group).[18] About AD 200, the Alans were the only branch of the Sarmatians to keep their culture in the face of a Gothic invasion, and the Alans remaining built up a great kingdom between the Don and the Volga, according to Coon, The Races of Europe. Between AD. 350 and 374, the Huns destroyed the Alan kingdom, and a few survive to this day in the Caucasus as the Ossetes.

In the 8th century a consolidated Alan kingdom, referred to in sources of the period as Alania, emerged in the northern Caucasus Mountains, roughly in the location of the latter-day Circassia and the modern North Ossetia–Alania. At its height, Alania was a centralized monarchy with a strong military force and benefited from the Silk Road.

Forced out of their medieval homeland (south of the River Don in present-day Russia) during Mongol rule, Alans migrated towards and over the Caucasus mountains, where they subsequently would form three ethnographical groups; the Iron, Digoron, and Kudar. The Jassic people were a group that migrated in the 13th century to Hungary.

In recent history, the Ossetians participated in Ossetian-Ingush conflict (1991–1992) and Georgian–Ossetian conflicts (1918–1920, early 1990s) and in the 2008 South Ossetia war between Georgia and Russia.

The Ossetian language belongs to the Iranian branch of the Indo-European language family.[17]

Ossetian is divided into two main dialect groups: Ironian[17] (os. – Ирон) in North and South Ossetia and Digorian[17] (os. – Дыгурон) of western North Ossetia. There are some subdialects in those two: like Tualian, Alagirian, Ksanian, etc. The Ironian dialect is the most widely spoken.

Ossetian is among the remnants of the Scytho-Sarmatian dialect group which was once spoken across Central Asia. Other surviving languages closely related to Ossetian are Yaghnobi,[25] Pashto[25] and Pamiri languages,[25] all spoken more than 2,000 km to the east in Afghanistan, northwestern Pakistan and some parts of Tajikistan.

The Alans were partially Christianized by Byzantine missionaries in the beginning of the 10th century.[26] Most of the Ossetians became Eastern Orthodox Christians in the 12th–13th centuries[17] under the influence of Georgia.[27][28]

As the time went by, Digor in the west came under Kabardian and Islamic influence. It was through the Kabarday (an East Circassian tribe) that Islam was introduced into the region in the 17th century.[29]

Ossetia became part of the Russian Empire in 1774, which strengthened Orthodox Christianity considerably by sending missionaries there from the Russian Orthodox church. However, most of the missionaries chosen were churchmen from Christian Orthodox communities living in Georgia (including Armenians and Caucasus Greeks as well as ethnic Georgians) rather than from Russia, so as to avoid being seen by the Ossetians as too intrusive.

Today, the majority of Ossetians, both from North and South Ossetia, follow Eastern Orthodoxy, although there is a Muslim minority in the North.[17]

Ossetian ethnic religion is still widespread among Ossetians, with rich ritual traditions, sacrificing animals, holy shrines, non-Christian saints, etc. In accordance with the research service «Sreda» there is a highest percentage of followers in North Ossetia among all regions of Russia,[30] while the research ignores the ethnicity of people participated in the polls. There are temples, known as kuvandon in most of the villages.[31] Ætsæg Din is the Ossetian ethnic religion, emerging since the 1980s.[32]

The vast majority of Ossetians live in Russia (according to the Russian Census (2002)):

Second-largest population of Ossetians is in South Ossetia.

There is a significant number living in north-central Georgia (Trialeti). A large Ossetian diaspora lives in Turkey, and Ossetians have also settled in Belgium, France, Sweden, Syria, the USA (New York City, Florida and California as examples), Canada (Toronto), Australia (Sydney) and other countries all around the world.

The Ossetians are a unique ethnic group of the Caucasus, being the only people found on both the north and south slopes of the mountain, also speaking an Indo-European language surrounded by Caucasian ethnolinguistic groups. The Y-haplogroup data indicate that North Ossetians are more similar to other North Caucasian groups, and South Ossetians are more similar to other South Caucasian groups, than to each other. Also, with respect to mtDNA, Ossetians are significantly more similar to Iranian groups than to Caucasian groups. It is thus suggested that there is a common origin of Ossetians from Iran, followed by subsequent male-mediated migrations from their Caucasian neighbours.[33][34] However, it is important to bear in mind that, as with other ethnic groups throughout the Caucasus, and despite the mainly Indo-European and Iranic roots of the Ossetians, their genetic make-up is otherwise still relatively heterogeneous as a result of extensive intermarriage with other ethnic groups in the region. In the Medieval, Imperial Russian, Soviet and contemporary periods it has been and is common to find Christian Orthodox Ossetian intermarriage with Georgians, Russians, Armenians, and Pontic Greeks, and Muslim Ossetian intermarriage with Meskhetian Turks, Kabardays, Ingushes, Chechens, and other Muslim communities of especially the North Caucasus.