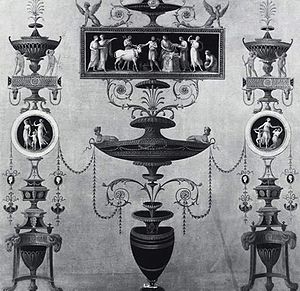 A design for one of the walls of the Estruscan dressing room at Osterley Park by Robert Adam.

Osterley Park is a mansion set in a large park of the same name. It is in the London Borough of Hounslow, part of the western suburbs of London.

When the house was built it was surrounded by rural countryside. It was one of a group of large houses close to London which served as country retreats for wealthy families, but were not true country houses on large agricultural estates. Other surviving country retreats of this type near London include Syon House and Chiswick House. The park is one of the largest open spaces in west London, although the M4 motorway cuts across the middle of it.

The original building on this site was a manor house built in the 1570s for banker Sir Thomas Gresham, who purchased the manor of Osterley in 1562.[1] The "faire and stately brick house" was completed in 1576. It is known that Queen Elizabeth visited.[2] The stable block from this period remains at Osterley Park. Gresham was so wealthy he also bought the neighbouring Manor of Boston in 1572.

Two hundred years later the manor house was falling into disrepair, when, as the result of a mortgage default, it came into the ownership of Sir Francis Child, the head of Child's Bank. In 1761 he employed Robert Adam, who was just emerging as one of the most fashionable architects in England, to remodel the house. When Sir Francis died in 1763, the project was taken up by his brother and heir Robert Child, for whom the interiors were created.

The house is of red brick with white stone details and is approximately square, with turrets in the four corners. Adam's design, which incorporates some of the earlier structure, is highly unusual, and differs greatly in style from the original construction. One side is left almost open and is spanned by an Ionic pedimented screen which is approached by a broad flight of steps and leads to a central courtyard, which is at piano nobile level.

Adam's neoclassical interiors are among his most notable sequences of rooms. Horace Walpole sarcastically described the drawing room as "worthy of Eve before the fall." The rooms are characterised by elaborate but restrained plasterwork, rich, highly varied colour schemes, and a degree of coordination between decor and furnishings unusual in English neoclassical interiors. Notable rooms include the entrance hall, which has large semi-circular alcoves at each end, and the Etruscan dressing room, which Adam said was inspired by the Etruscan vases in Sir William Hamilton's collection, illustrations of which had recently been published. Adam also designed some of the furniture, including the opulent domed state bed, still in the house. 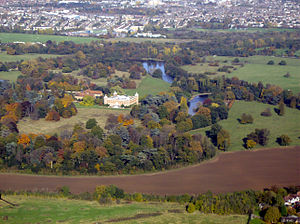 Osterley Park from the air 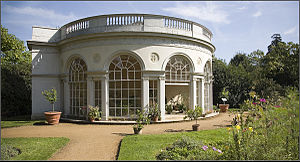 Robert Child's only daughter, Sarah Anne Child, married John Fane, 10th Earl of Westmorland in 1782. When Child died two months later, his will placed his vast holdings, including Osterley, in trust for his eldest granddaughter, Lady Sarah Sophia Fane, who was born in 1785. She married George Child-Villiers, 5th Earl of Jersey, and thus Osterley passed into the Jersey family.

The grounds of Osterley Park were used for the training of the first members of the Local Defence Volunteers (forerunners of the Home Guard) when the 9th Earl, a friend of publisher Lord Hulton, allowed writer and military journalist Captain Tom Wintringham to establish the first Home Guard training school (which Hulton sponsored) at the park in May/June 1940, teaching the theory and practice of modern mechanical warfare, guerilla warfare techniques and using the estate workers' homes, then scheduled for demolition, to teach street fighting techniques.[3] The painter Roland Penrose taught camouflage techniques here,[4] attempting to disguise the obvious charms of a naked Lee Miller. Maj. Wilfred Vernon taught the art of mixing home-made explosives, and his explosives store can still be seen at the rear of the house, while Canadian Bert "Yank" Levy, who had served under Wintringham in the Spanish Civil War taught knife fighting and hand-to-hand combat. Despite winning world fame in newsreels and newspaper articles around the world (particularly in the US), the school was disapproved of by the War Office and Winston Churchill, and was taken over in September 1940. Closed in 1941, its staff and courses were reallocated to other newly opened WO-approved Home Guard schools.[3]

George Child Villiers, 9th Earl of Jersey opened Osterley to the public in 1939 after having received many requests to see its historic interior.[5] The Earl justified his decision by saying that it was "sufficient answer that he did not live in it and that many others wished to see it"; some 12,000 people subsequently visited the house in its first month of opening.[5] A series of exhibitions of artworks by living artists were staged by the Earl in the top-floor rooms of Osterley to contrast the 18th-century interiors on the ground floor on its 1939 opening.[5] Though it never came to fruition, the Earl planned to create an arboretum in the grounds of Osterley.[5]

After the Second World War the Earl approached Middlesex County Council who had shown interest in purchasing the house before the war, but eventually decided to give the house and its park to the National Trust.[5] The furniture at Osterley was sold to the Victoria & Albert Museum.[5] The 9th Earl moved to the island of Jersey in 1949, taking many pictures from Osterley's collection with him, although a large number of the pictures were destroyed in a warehouse fire on the island soon after.[5] The Earl assisted the Ministry of Works and V&A in their restoration of the house to its present late 18th-century state.[5]

The National Trust took charge of Osterley in 1991, and received many loans and gifts from Lord Jersey including items of silver, porcelain, furniture and miniatures.[5] The trust commissioned portraits of Lord Jersey and his wife by Howard Morgan, which are hung upstairs.[5] In 2014 a ten-year loan to Osterley of portraits of the Child family was arranged by William Villiers, 10th Earl of Jersey, the present Earl.[6] Portraits included in 2014 loan include Allan Ramsay's portrait of Francis Child (1758), and George Romney's portrait of Francis's brother, Robert.[6]