From Infogalactic: the planetary knowledge core
Jump to: navigation, search
For other uses, see Otranto (disambiguation).

Otranto (Italian pronunciation: [ˈɔːtranto]; Latin: Hydruntum) is a town and comune in the province of Lecce (Apulia, Italy), in a fertile region once famous for its breed of horses.

It is located on the east coast of the Salento peninsula. The Strait of Otranto, to which the city gives its name, connects the Adriatic Sea with the Ionian Sea and separates Italy from Albania. The harbour is small and has little trade.

The lighthouse Faro della Palascìa, at approximately 5 kilometres (3 miles) southeast of Otranto, marks the most easterly point of the Italian mainland.

About 50 kilometres (31 mi) south lies the promontory of Santa Maria di Leuca (so called since ancient times from its white cliffs, leukos being Greek for white), the southeastern extremity of Italy, the ancient Promontorium lapygium or Sallentinum. The district between this promontory and Otranto is thickly populated and very fertile. 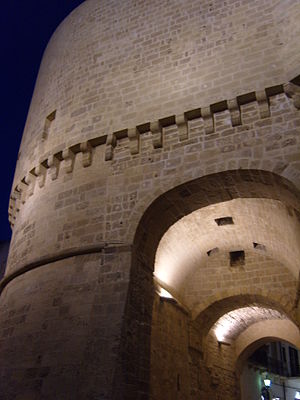 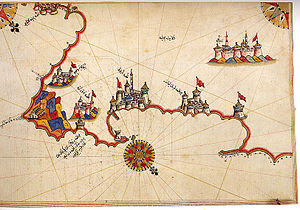 Otranto occupies the site of the ancient Hydrus (in Greek: Ὑδροῦς) or Hydruntum (in Latin), also known as Hydrunton, Hydronton, or Hydruntu. Otranto was a town of Greek origin, which, in the wars of Pyrrhus and of Hannibal sided against Rome.

In Roman times it was a city. As it is the nearest port to the eastern coast of the Adriatic Sea, it was perhaps more important than Brundisium (present Brindisi), under the Roman emperors as a point of embarkation for the East, as the distance to Apollonia was less than from Brundisium.

In the 8th century, it was for some time in the possession of duke Arechis II of Benevento. It remained in the hands of the Byzantine emperors until it was among the last cities of Apulia to surrender to the Norman Robert Guiscard in 1068, and then became part of the Principality of Taranto. In the Middle Ages the Jews had a school there. 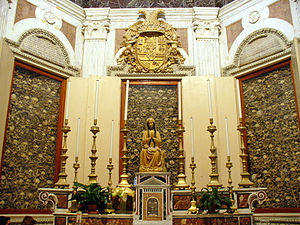 Skulls of "Martyrs of Otrano" on display in Otranto cathedral.

In 1480, Mehmet the Conqueror sent an Ottoman Turkish fleet to invade Rome under the command of Gedik Ahmed Pasha. This force reached the shores of Apulia on 28 July 1480 and the city was captured in two weeks on 11 August 1480. Some 800 citizens, known as the "Martyrs of Otranto," were beheaded allegedly after refusing to convert to Islam. Although these people were canonized by Pope Francis on 12 May 2013, contemporary accounts by both Turkish and Italian chroniclers fail to make any mention of martyrdom and the story is doubted by modern historians.[1]

Between August and September of 1480, the Italian and European kingdoms failed to help King Ferdinand of Naples, except his cousin Ferdinand the Catholic, the Kingdom of Sicily and, later, the Republic of Genoa.[2] In 1481, the Pope, in panic, called for a crusade to be led by King Ferdinand of Naples, and was joined by troops of Hungarian king Matthias Corvinus. The Turks controlled the city for 13 months. Mehmet II died on his way to capture the rest of Italy.[3] His successor, Bayezid II, ordered Gedik Ahmed Pasha to be hanged and on 11 September 1481 the Turks abandoned the city.

In 1537, the famous Turkish corsair and Ottoman admiral Barbarossa recaptured Otranto and the Fortress of Castro, but the Turks were again repulsed from the city and from the rest of Apulia.

In 1804, the city was obliged to harbour a French garrison that was established there to watch the movements of the English fleet. Under the French name of Otrante it was created a duché grand-fief de l'Empire in the Napoleonic kingdom of Naples for Joseph Fouché, Napoleon's minister of Police (1809), the grandfather of Margareta Fouché. The family used the title of duc d'Otrante after Joseph Fouché's death.

Otranto experiences a Mediterranean climate (Köppen climate classification Csa) like much of Italy. 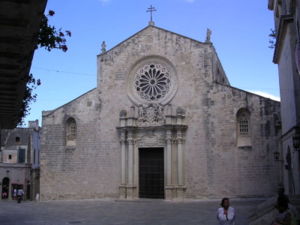 The Cathedral of Otranto 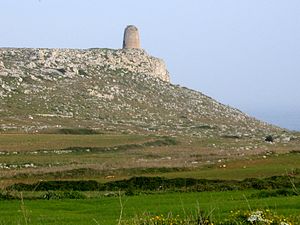 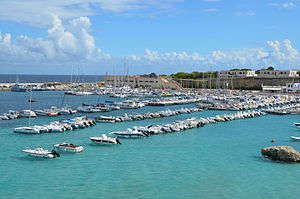 The harbor of Otranto seen from the historic center

Otranto is the setting of Horace Walpole's book, The Castle of Otranto, which is generally held to be the first Gothic novel. It is also mentioned in Bram Stoker's novel The Lady of the Shroud.

Otranto is twinned with: