The Ottawa Dragon Boat Festival is a yearly event that attracts 5,500 paddlers and over 70,000 spectators in Ottawa, Ontario, Canada.

Since its inception in 1993, thousands of participants have gathered at Mooney's Bay Park on Riverside Drive in Ottawa to race. Admission to the festival is free to spectators.

In 1998 the "Pledge Challenge" was added as a charitable component. The Ottawa Dragon Boat Foundation was founded in 2004 to help efforts with fundraising for local charities. The challenge has raised over $3 million.

Teams preparing for the race.

The Opening Ceremony is presented on Friday with cultural tourist attractions like the Royal Canadian Mounted Police Pipe and Drum band. The Parade of Champions is similar in concept to the Olympics' Parade of Nations. Numerous dignitaries attend including the Mayor of Ottawa. Other special guests include CTV Ottawa media personalities and other prominent members of the broader community. The Opening ceremony also features some ancient Asian cultural celebrations to pay respect to the roots of the festival heritage. Past performers include The Success Lion Dance Troupe, who celebrate a 3000-year-old tradition that symbolizes prosperity, luck and happiness; and The Oto-Wa Taiko Japanese drummers. 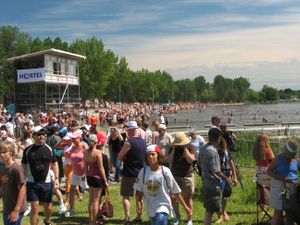 Mooney's Bay during the 2006 edition of the race

The children's area provides continuous children's programming during the festival from 10:00 a.m.- 5:00 p.m. each day. Past performers include Spartacat and Riley the Raccoon from the Ottawa 67's.

The festival has multiple stages. The main stage has late night concerts on each evening of the festival. Past performers include Sam Roberts Band, The Sheepdogs and Arkells.

Past performers on the beer garden stage include Jim Bryson and Amanda Rheaume.[2]

Festival attendees can choose from over 50 vendors, artisans, concessionaires and exhibitors. Past vendors include Wilderness Tours, Creative Minds, Creations of the Heart, Lemon Heaven, Stone Soup, and Ottawa Belgian Waffle.[3]