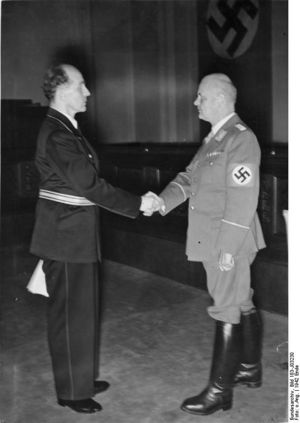 Thierack was born in Wurzen in Saxony. He took part in the First World War from 1914 to 1918 as a volunteer, reaching the rank of lieutenant. He suffered a facial injury and was decorated with the Iron Cross, second class. After the war ended, he resumed his interrupted law studies and ended them in 1920 with his Assessor (junior lawyer) examination. In the same year, he was hired as a court Assessor in Saxony.

Joining of the Nazi party

On 1 August 1932, Thierack joined the Nazi Party. After the Nazis seized power in 1933, he managed within a very short time to rise high in the ranks from a prosecutor to President of the People's Court (Volksgerichtshof). The groundwork on which this rise was built was not merely that Thierack had been a Nazi Party member, but rather also that he had been leader of the National Socialist jurists' organization, the so-called Rechtswahrerbund.

On 12 May 1933, having been appointed Saxony's justice minister, it was Thierack's job to "Nazify" justice, which was a part of the Nazis' Gleichschaltung (Coordination) that he had to put into practice in Saxony. After going through several mid-level professional posts, he became Vice President of the Reich Court in 1935 and in 1936 President of the Volksgerichtshof, which had been newly founded in 1934. He held this job, interrupted as it was by two stints in the armed forces, until 1942, when he was succeeded in the position by Roland Freisler.

Persecution and debasement of law as Reich Minister of Justice

On 20 August 1942, Thierack assumed the office of Reich Minister of Justice. He introduced the monthly Richterbriefe in October 1942, in which were presented model – from the Nazi leaders' standpoint – decisions, with names left out, upon which German jurisprudence was to be based. He also introduced the so-called Vorschauen and Nachschauen ("previews" and "inspections"). After this, the higher state court presidents, in proceedings of public interest, had at least every fortnight to discuss with the public prosecutor's office and the State Court president – who had to pass this on the responsible criminal courts – how a case was to be judged before the court's decision.

Thierack not only made penal prosecution of all unpopular persons and groups harsher. "Antisocial" convicts on the whole were much more often turned over to the SS. This usually meant Jews, Poles, Russians, and Gypsies. Soon afterwards, though, he utterly forwent any pretense of legality and simply began handing these people over to the SS. Thierack came to an understanding with Heinrich Himmler that certain categories of prisoners were to be, to use their words, "annihilated through work". Ever since coming to office as Reich Minister of Justice in August 1942, Thierack had seen to it that the lengthy paperwork involved in clemency proceedings for those sentenced to death was greatly shortened.

At Thierack's instigation, the execution shed at Plötzensee Prison in Berlin was outfitted with eight iron hooks in December 1942 so that several people could be put to death at once, by hanging (there had already been a guillotine there for quite a while). At the mass executions beginning on 7 September 1943, it also happened that some prisoners were hanged "by mistake". Thierack simply covered up these mistakes and demanded that the hangings continue.

After the Allies arrested him, Thierack committed suicide in Sennelager, Paderborn, by poisoning before he could be brought before the court at the Nuremberg Judges' Trial.