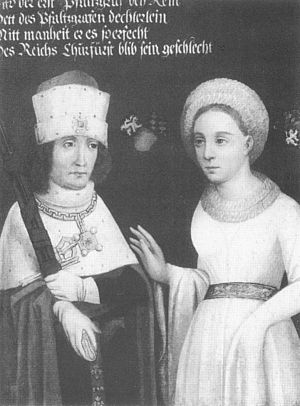 Otto II with his wife Agnes

Otto II of Bavaria (German: Otto II der Erlauchte , Herzog von Bayern, Pfalzgraf bei Rhein, 7 April 1206 in Kelheim – 29 November 1253) known as Otto the Illustrious was the Duke of Bavaria and Count Palatine of the Rhine (see Electorate of the Palatinate). He was a son of Louis I and Ludmilla of Bohemia and a member of the Wittelsbach dynasty.

Otto was born at Kelheim.

At the age of sixteen, he was married to Agnes of the Palatinate, a granddaughter of Duke Henry the Lion and Conrad of Hohenstaufen. With this marriage, the Wittelsbach inherited Palatinate and kept it as a Wittelsbach possession until 1918. Since that time also the lion has become a heraldic symbol in the coat of arms for Bavaria and the Palatinate.

Otto acquired the rich regions of Bogen in 1240, and Andechs and Ortenburg in 1248 as possessions for the Wittelsbach and extended his power base in Bavaria this way. With the county of Bogen the Wittelsbach acquired also the white and blue coloured lozenge flag which since that time has been the flag of Bavaria (and of the Palatinate).

After a dispute with emperor Frederick II was ended, he joined the Hohenstaufen party in 1241. His daughter, Elizabeth, was married to Frederick's son Conrad IV. Because of this, Otto was excommunicated by the pope.

He died in Landshut in 1253. Like his forefathers, Otto was buried in the crypt of Scheyern Abbey.

Otto married Agnes, the daughter of Henry V, Count Palatine of the Rhine (a son of Henry the Lion) and Agnes of Hohenstaufen, in Worms in 1222. Their children were: