Otto was the third son of Henry the Lion, Duke of Bavaria and Saxony, and Matilda Plantagenet.[2] His exact birthplace is not given by any original source.[3][4] He grew up in England[5] in the care of his grandfather King Henry II. Otto was fluent in French as well as German.[6] He became the foster son of his maternal uncle, Richard I of England. In 1190, after he left England to join the Third Crusade, Richard appointed Otto Earl of York. The authenticity (or authority) of this grant was doubted by the vassals of Yorkshire, who prevented Otto taking possession of his earldom.[7] Still, he probably visited Yorkshire in 1191,[6] and he continued to claim the revenues of the earldom after becoming king of Germany, although he never secured them.[8] Neither did he succeed in getting the 25,000 silver marks willed to him by his uncle in 1199.[9]

In 1195, Richard began negotiations to marry Otto to Margaret, daughter and heiress of King William the Lion of Scotland.[10][9][11] Lothian, as Margaret's dowry, would be handed over to Richard for safekeeping and the counties of Northumberland and Cumberland (Carlisle) would be granted to Otto and turned over to the king of Scotland. The negotiations dragged on until August 1198, when the birth of an heir to William rendered them unnecessary. Having failed in his efforts to secure Otto an English earldom or else a Scottish kingdom, in September 1196 Richard, as duke of Aquitaine, enfeoffed Otto with the county of Poitou.[10] There is some disagreement over whether Otto received Poitou in exchange for or in addition to the earldom of York.[6]

Otto was in Poitou from September 1196 until mid-1197, when he joined Richard in Normandy to confer over the appointment of bishops to the vacant sees of Poitiers, Limoges and Périgueux. He then participated in the war against Philip II of France on the side of Richard. In October he returned to Poitou. The German historian Jens Ahlers, taking into account Otto's life prior to 1198, considers that he might have been the first foreign king of Germany.[6]

Conflict with Philip of Swabia

After the death of Emperor Henry VI, the majority of the princes of the Empire, situated in the south, elected Henry’s brother, Philip, Duke of Swabia, king in March 1198, after receiving money and promises from Philip in exchange for their support.[12] Those princes opposed to the Staufen dynasty also decided, on the initiative of Richard of England, to elect instead a member of the House of Welf. Otto's elder brother, Henry, was on a crusade at the time, and so the choice fell to Otto. Otto, soon recognized throughout the northwest and the lower Rhine region,[5] was elected king by his partisans in Cologne on June 9, 1198.[5] Otto took control of Aachen, the place of coronation, and was crowned by Adolf, Archbishop of Cologne, on July 12, 1198.[5] This was of great symbolic importance, since the Archbishop of Cologne alone could crown the King of the Romans.[12] Nevertheless, the coronation was done with fake regalia, because the actual materials were in the hands of the Staufen.

Otto's election pulled the empire into the conflict between England and France. Philip had allied himself with the French king, Philip II, while Otto was supported at first by Richard I, and after his death in 1199 by his brother John.[13]

The papacy meanwhile, under Innocent III, determined to prevent the continued unification of Sicily and the Holy Roman Empire under one monarch[14] seized the opportunity to extend its influence. Therefore, Innocent III favoured Otto, whose family had always been opposed to the house of Hohenstaufen.[2] Otto himself also seemed willing to grant any demands that Innocent would make. The confusion in the empire allowed Innocent to drive out the imperial feudal lords from Ancona, Spoleto, and Perugia, who had been installed by Emperor Henry VI.[15] At the same time, Innocent encouraged the cities in Tuscany to form a league, called the League of San Genesio, against imperial interests in Italy, and they placed themselves under Innocent’s protection.[15] In 1201, Innocent announced that he recognized Otto as the only legitimate king. In return, Otto promised to support the pope's interests in Italy. Otto also had the support of Ottokar I, the king of Bohemia, who although at first siding with Philip of Swabia, eventually threw in his lot with Otto.[16] Otto’s cause was further strengthened by the support of the Danish king, Valdemar II. But Philip achieved a great deal of success in the civil war that followed, allowing him in 1204 to be again crowned king, this time by the archbishop of Cologne.[16] 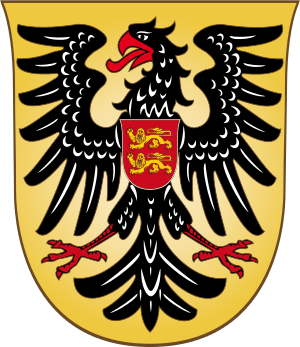 Coat of arms of Otto IV

In the following years, Otto's situation worsened because after England's defeat by France he lost England's financial support. Many of his allies changed sides to Philip, including his brother Henry. Otto was defeated and wounded in battle by Philip on July 27, 1206, near Wassenberg, and as a consequence he also lost the support of the pope, who began to favour the apparent winner in the conflict.[17] Otto was forced to retire to his possessions near Braunschweig, leaving Philip virtually uncontested as German king.

Innocent III forced the two warring parties into negotiations at Cologne, and in exchange for renouncing his claim to the throne, Philip promised Otto the hand of his daughter Beatrix in marriage, together with the Duchy of Swabia and an enormous dowry.[13] Otto refused, and as the civil war was again about to recommence, Philip was murdered on June 21, 1208.

After Philip's death, Otto made amends with the Staufen party and became engaged to Philip's daughter Beatrix.[18] In an election in Frankfurt on November 11, 1208, he gained the support of all the electoral princes, as he promised he would not make hereditary claims to the imperial crown on behalf of any children he might father.[16] Now fully reconciled with Innocent, Otto made preparations to be crowned Holy Roman Emperor. To secure Innocent’s support, he promised to restore to the Papal States all territory that it had possessed under Louis the Pious, including the March of Ancona, the Duchy of Spoleto, the former Exarchate of Ravenna, and the Pentapolis.[18] Travelling down via Verona, Modena, and Bologna, he eventually arrived at Milan where he received the Iron Crown of Lombardy and the title of King of Italy in 1208. He was met at Viterbo by Pope Innocent and was taken to St. Peter's Basilica, where he was crowned emperor by Pope Innocent on October 21, 1209,[19] before rioting broke out in Rome, forcing Otto to abandon the city.[20]

Not content with his successes so far, Innocent also obtained from Otto further written concessions to the Papal See,[17] including to allow all elections of German bishops to be conducted according to Church ordinances, and not to prevent any appeals to Rome.[18] He also promised to hand over to the Church all income from any vacant sees which had been flowing into the imperial treasury.[18] 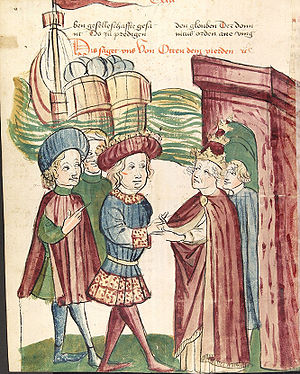 After abandoning Rome, Otto marched north, reaching Pisa by November 20. Here, probably advised by Peter of Celano and Dipold, Count of Acerra,[21] he was convinced to abandon his earlier promises, and Otto immediately worked to restore imperial power in Italy.[22] After his consecration by the pope, he promised to restore the lands bequeathed to the church by the countess Matilda of Tuscany nearly a century before, and to not move against Frederick Roger, the King of Sicily.[23] But he quickly broke all his promises. He threw out the papal troops from Ancona and Spoleto, reclaiming the territory as imperial fiefs. He then demanded that Frederick of Sicily do homage for the duchies of Calabria and Apulia, and when Frederick refused to appear, Otto declared those fiefs forfeited.[23] Otto then marched on Rome, and commanded Innocent to annul the Concordat of Worms, and to recognise the imperial crown’s right to make nominations to all vacant benefices.[23]

Such actions infuriated Innocent and Otto was promptly excommunicated by the pope for this on November 18, 1210.[24][25] Subsequently, he tried to conquer Sicily,[19] which was held by the Staufen king Frederick, under the guardianship of Innocent III. Parallel to this, the German nobility by this time were growing ever more frustrated with Otto. They felt that instead of wasting his time in Italy, and playing power politics with the pope, it was his first duty to defend the northern provinces of the empire against Valdemar II of Denmark, who had taken advantage of Otto’s distractions by invading the northern provinces of the empire and possessing the whole Baltic coast from Holstein to Livonia.[23] So while Otto was in southern Italy, several princes of the empire, including the archbishops of Mainz and Magdeburg,[26] at the instigation of King Philip II of France and with the consent of the pope, elected Frederick King of the Romans at the Diet of Nuremberg in 1211.[27]

Otto’s ambassadors from Milan appeared before the Fourth Lateran Council, pleading his case for his excommunication to be lifted.[25] Although he claimed he had repented for his offences, and declared his willingness to be obedient to the Pope in all things, Innocent III had already recognised Frederick as emperor-elect.[25]

Otto returned to Germany to deal with the situation, hopeful to salvage something from the looming disaster.[26] He found most of the German princes and bishops had turned against him, and that Frederick, who had made his way up the Italian peninsula, had avoided Otto’s men who were guarding the passes through the Alps and had arrived at Constance.[26] Otto soon discovered that after Beatrix died in the summer of 1212, and Frederick arrived in Germany with his army in September 1212, most of the former Staufen supporters deserted Otto for Frederick, forcing Otto to withdraw to Cologne.[26] On December 5, 1212, Frederick was elected king for a second time by a majority of the princes.[28]

The support that Philip II of France was giving to Frederick forced King John of England to throw his weight behind his nephew Otto. The destruction of the French fleet in 1213 by the English saw John begin preparations for an invasion of France, and Otto saw a way of both destroying Frederick’s French support as well as bolstering his own prestige.[28] He agreed to join John in the invasion, and in February 1214, as John advanced from the Loire, Otto was supposed to make a simultaneous attack from Flanders, together with the Count of Flanders. Unfortunately, the three armies could not coordinate their efforts effectively. It was not until John, who had been disappointed in his hope for an easy victory after being driven from Roche-au-Moine and had retreated to his transports that the Imperial Army, with Otto at its head, assembled in the Low Countries.[29]

On 27 July 1214, the opposing armies suddenly discovered they were in close proximity to each other, on the banks of the little river Marque (a tributary of the river Deûle), near the Bridge of Bouvines. Philip's army numbered some 15,000, while the allied forces possessed around 25,000 troops, and the armies clashed at the Battle of Bouvines. It was a tight battle, but it was lost when Otto was carried off the field by his wounded and terrified horse, causing his forces to abandon the field.[30] It is said that Philip II had sent to Frederick the imperial eagle which Otto had left lying on the battlefield.[28]

This defeat allowed Frederick to take Aachen and Cologne,[28] as Otto was forced again to withdraw to his private possessions around Brunswick,[31] and he was forced to abdicate the imperial throne in 1215.[17] He died of disease, at Harzburg castle on May 19, 1218, requesting that he be mortally expiated in atonement of his sins. Historian Kantorowicz described the death as gruesome: "deposed, dethroned, he was flung full length on the ground by the Abbot, confessing his sins, while the reluctant priests beat him bloodily to death. Such was the end of the first and last Welf Emperor." [32]

He is entombed in Brunswick Cathedral.

Otto was related to every other King of Germany. He married twice:

He had no children by either Beatrice or Marie.