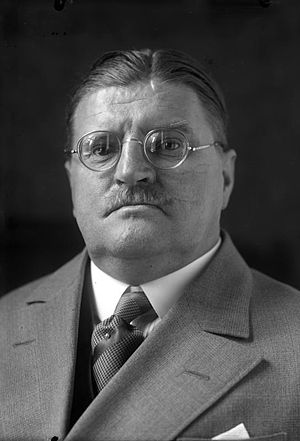 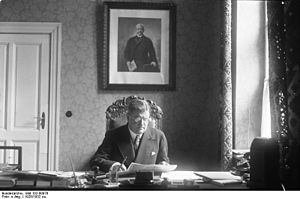 Otto Lebrecht Eduard Daniel Meissner (13 March 1880, Bischwiller, Alsace – 27 May 1953, Munich) was head of the Office of the President of Germany during the entire period of the Weimar Republic under Friedrich Ebert and Paul von Hindenburg and, finally, at the beginning of the Nazi government under Adolf Hitler.

The son of a postal official, Meissner studied law in Strasbourg from 1898 to 1903, where he also became a member of the Strassburg Student Youth Fraternity (Burschenschaft) Germania. Later he also studied in Berlin and earned his Doctor of Laws in 1908, at the age of 28, in Erlangen, Bavaria. Afterwards, he became a bureaucrat for the national railroad, the Reichsbahn, in Strasbourg. Between 1915 and 1917 he participated in the First World War in an infantry regiment. Up to 1919 he was more active behind the front, first in Bucharest, Romania, then in Kiev, and finally as a German business agent for the Ukrainian government.

Thanks to his good contacts, in 1919 Meissner became "Acting Advisor in the Bureau of the President" (who at that time was the social democrat Friedrich Ebert), and by 1920 rose to the position of "Ministerial Director and Head of the Bureau of the President." Ebert named Meissner to the post of State Secretary in 1923. He continued in that post under Ebert's successor Paul von Hindenburg.

When Hitler fused the functions of Head of State (here, the President) and the Head of Government (the Chancellery) in 1934, Meissner's office was renamed the "Presidential Chancellery" and restricted in its responsibilities to representative and formal matters. In 1937, Meissner was appointed to the newly created position of "State Minister of the Rank of a Federal Minister and Chief of the Presidential Chancellery of the Führer and Chancellor."

After the Second World War, Meissner was arrested by the Allies and interrogated as a witness in the Nuremberg Trials. In July 1947, he appeared as a character witness for the accused former State Secretary Franz Schlegelberger. He was finally prosecuted himself in the Wilhelmstrasse Trial, but the court acquitted him on 14 April. Two years later, in May 1949, he was accused again, in Munich, and adjudged a fellow traveler. His appeal was turned down, but the proceedings was called to a halt in January 1952.

In 1950, Meissner published a memoir covering his unusual bureaucrat's career in a book entitled State Secretary under Ebert, Hindenburg and Hitler. The writer Hans-Otto Meissner (1909–1992) was his son.

Meissner, who lived with his family in the palace of the German President between 1929 and 1939, undoubtedly enjoyed major influence upon the presidents, especially Hindenburg. Together with Kurt von Schleicher and a few others, Meissner, in the years 1929 and 1930, furthered the dissolution of the parliamentary system by means of a civil presidential cabinet.

His role in the appointment of Hitler to Chancellor in the period of December 1932 until January 1933 remains a controversy among historians. As member of the "camarilla", Meissner was certainly no small influence as State Secretary, due to his close relations with president Paul von Hindenburg. Together with Oskar von Hindenburg and Franz von Papen, Meissner organized the negotiations with Hitler to depose von Schleicher and appoint Hitler to the post of Chancellor. For the Nazis' part, the talks were facilitated through Wilhelm Keppler, Joachim von Ribbentrop and the banker Kurt Freiherr von Schröder, a former officer and head of the old-guard conservative "Herrenklub" (Gentlemen's club) in Berlin, in which von Papen was also active. Neither Hitler nor Hindenburg, as of the end of 1932, would have initiated contact to one another, so great was their mutual distaste.

Meissner submitted his resignation in 1933, but was turned down, whereupon he assumed responsibility primarily for delegational duties. In 1937, the Nazi regime raised him to the rank of Federal Minister, with the title, "Chief of the Presidential Chancellery of the Führer and the Chancellor". But politically, his influence in the Hitler regime was distinctly minor.

Note that his publishers spell his name Meissner.