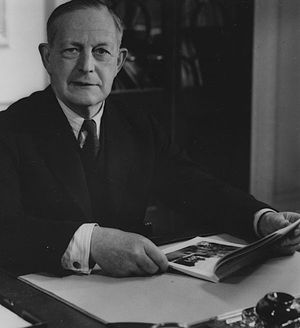 Sir Otto Ernst Niemeyer GBE KCB (1883–1971) was financial controller at the Treasury and a director at the Bank of England.

Niemeyer was educated at St Paul's and Balliol College, Oxford before joining HM Treasury. He moved to the Bank in 1927 as an Adviser to the Governors. Niemeyer was a member of the Financial Committee of the League of Nations between 1922 and 1937, and he was also involved with a number of financial missions (to Australia and New Zealand, Brazil, Argentina, India, Bombpton and China). In 1938 Niemeyer became an Executive Director of the Bank, and he stayed in this position until 1949, though he continued as a non-executive director until 1952, and had a room at the Bank until 1966. Outside the Bank he was also on the Council of Foreign Bondholders (1935–65) and director of the Bank for International Settlements 1937–1940.[1][2]

He was also treasurer of the National Association of Mental Health (UK) post World War II. His niece, Mary Applebey, was General Secretary of the association.

Australia had accrued substantial debt, mainly from Britain's independent banking sector, by the late 1920s – partly as a result of Prime Minister Bruce's "Men, Money, Markets" economic strategy, and partly because of the large war debt established during World War I. After the Wall Street Crash, the United States called in many of its World War I loans, including many from the UK, which, in turn called in its own loans from Australia. Australia had accumulated such massive debt that it was unable to repay even the interest on its loans. To avert total bankruptcy with the onset of the Australia's Great Depression, Australia asked Britain for a deferment of payment on its war debts. To determine whether or not this was a viable financial option, the Bank of England sent Niemeyer to give an assessment of Australia and its financial situation. He came by arrangement with the Commonwealth Bank of Australia and agreement by Prime Minister James Scullin.

Scullin announced the visit in Parliament on 19 June 1930:

Economic historian Alex Millmow has commented that, when Niemeyer, his adviser Professor Theodore Gregory, and assistant Raymond Kershaw (an Australian economist) arrived in July 1930 they were unaware of the political storm they were to cause, for Niemeyer would bring English orthodox economics down on Australia's head. The high point of Niemeyer's tour was his address at the Melbourne Conference of Commonwealth and State leaders, where he said that the 'cold facts must be faced' ... 'In short, Australia is off budget equilibrium, off exchange equilibrium, and faced by considerable unfunded and maturing debts both internally and externally, in addition to which she has on her hands an every large program of loan works for which no financial provision has been made'. He warned Australia had two years 'to get its house in order' before a tranche of external debt matured in 1932. He believed Australians were too optimistic about the country's prospects.[4]

He was critical of Australia's overconfidence and essentially said that Australia was "living beyond its means" and had become prosperous through "mistakes"; that Australians would have to "accept a lower standard of living"; that Australia should continue to exist only as a means to supply Britain with goods; and that its protectionist attitude was deviating Australia from its true purpose.

(While in Australia he devised the 'Niemeyer statement', a monthly statement of commonwealth government financial transactions.)

Populists like Jack Lang and former prime minister Billy Hughes decried Niemeyer's diagnosis and therapy. In his pamphlet in reply to Niemeyer, Hughes said, in a much-quoted comment: "We are to be 'hewers of wood and drawers of water!'[5] We are to produce the raw materials for Britain's industry and – in order that Britain may be able to compete in the markets of the world, we must produce them cheaply – the cheaper the better".[6]

The Commonwealth and State leaders gave mixed responses. Niemeyer returned home. The governments of Australia later met to negotiate a compromise in 1931, known as the Premiers' Plan.

Manning Clark described Niemeyer's visit in his history of Australia.[7]