Ottoman Algeria, formally the Regency of Algiers, was an Ottoman territory centered on Algiers, eventually covering all coastal lands of modern Algeria. It was established in 1525 when Hayreddin Barbarossa captured the city.[6][7] The Regency of Algiers was the principal center of Ottoman power in the Maghreb.[6] It was also a base from which attacks were made on European shipping.[6] It rivaled and displaced the Zianids, the Hafsids and the Spanish possessions in northern Africa, and was a major hub of Mediterranean piracy and slave markets, until the French conquest of Algeria in 1830. 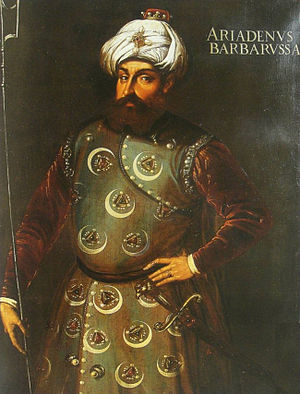 Hayreddin Barbarossa was the founder of the Regency of Algiers.

Around the same time, the Ottoman privateer brothers Oruç and Hayreddin—both known to Europeans as Barbarossa, or "Red Beard"—were operating successfully off Tunisia under the Hafsids. In 1516, Oruç moved his base of operations to Algiers and asked for the protection of the Ottoman Empire in 1517, but was killed in 1518 during his invasion of the Kingdom of Tlemcen. Hayreddin succeeded him as military commander of Algiers.

Base in the war against Spain

Hayreddin Barbarossa established the military basis of the regency. The Ottomans provided a supporting garrison of 2,000 Turkish troops with artillery.[7] He left Hasan Agha in command as his deputy when he had to leave for Constantinople in 1533.[6]

The son of Barbarossa, Hasan Pashan was in 1544, when his father retired, the first governor of the Regency to be directly appointed by the Ottoman Empire. He took the title of beylerbey.[6] Algiers became a base in the war against Spain, and also in the Ottoman conflicts with Morocco.

Beylerbeys continued to be nominated for unlimited tenures until 1587. After Spain had sent an embassy to Constantinople in 1578 to negotiate a truce, leading to a formal peace in August 1580, the Regency of Algiers was a formal Ottoman territory, rather than just a military base in the war against Spain.[6] At this time, the Ottoman Empire set up a regular Ottoman administration in Algiers and its dependencies, headed by Pashas, with 3 year terms to help considate Ottoman power in the Maghreb. 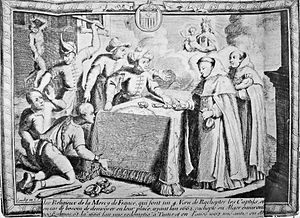 Despite the end of formal hostilities with Spain in 1580, attacks on Christian and especially Catholic shipping, with slavery for the captured, became prevalent in Algiers, and were actually the main industry and source of revenues of the Regency.[9]

In the early 17th century, Algiers also became, along with other North African ports such as Tunis, one of the bases for Anglo-Turkish piracy. There were as many as 8,000 renegades in the city in 1634.[9][10] (Renegades were former Christians, sometimes fleeing the law, who voluntarily moved to Muslim territory and converted to Islam.) Hayreddin Barbarossa is credited with tearing down the Peñón of Algiers and using the stone to build the inner harbor.[11]

"The infinity of goods, merchandise jewels and treasure taken by our English pirates daily from Christians and carried to Allarach [ Larache, in Morocco], Algire and Tunis to the great enriching of Mores and Turks and impoverishing of Christians" 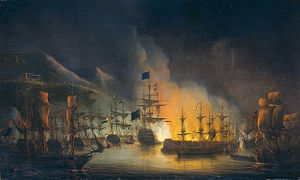 Bombardment of Algiers in 1816, by Martinus Schouman.

During the early 19th century, the Regency of Algiers again resorted to widespread piracy against shipping from Europe and the young United States of America, mainly due to internal fiscal difficulties.[9] This in turn led to the First Barbary War and Second Barbary Wars, which culminated in August 1816 when Lord Exmouth executed a naval Bombardment of Algiers.

During the Napoleonic Wars, the Regency of Algiers had greatly benefited from trade in the Mediterranean, and of the massive imports of food by France, largely bought on credit by France. In 1827, Hussein Dey, Algeria's Ottoman ruler, demanded that the French pay a 31-year-old debt, contracted in 1799 by purchasing supplies to feed the soldiers of the Napoleonic Campaign in Egypt.

The French consul Pierre Deval refused to give answers satisfactory to the dey, and in an outburst of anger, Hussein Dey touched the consul with his fan. Charles X used this as an excuse to break diplomatic relations. The Regency of Algiers would end with the French invasion of Algiers in 1830, followed by subsequent French rule for the next 132 years.[9]

Until 1671, Beylerbeys, Pachas and Aghas were appointed by the Ottoman sultan and were subjucted to him. After a coup in 1671, the Regency acquired a large degree of autonomy and became a military republic, ruled in the name of the Ottoman sultan by Deys, officers chosen either by the Ottoman militia or the Captains.[14][15] From 1718 onwards, Deys were elected by the Divan, an assembly aimed to represent the interests of both Captains and Janissaries.