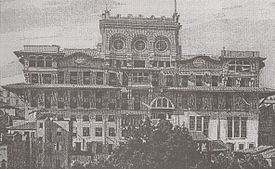 The Ottoman Bank (Turkish: Osmanlı Bankası) (formerly Imperial Ottoman Bank, Ottoman Turkish: Bank-ı Osmanî-i Şahane‎) was founded in 1856 in the Galata business section of İstanbul, the capital of the Ottoman Empire, as a joint venture between British interests, the Banque de Paris et des Pays-Bas of France, and the Ottoman government.

It operated as the Imperial Ottoman Bank from 1863 to 1924. Privileged as a state bank, it carried out the functions of a central bank.

In June 1996, the Ottoman Bank was sold to the Doguş Group, from which point on its banking activities were centred primarily in Turkey.

In 2001, the Ottoman Bank became part of the Garanti Bank. 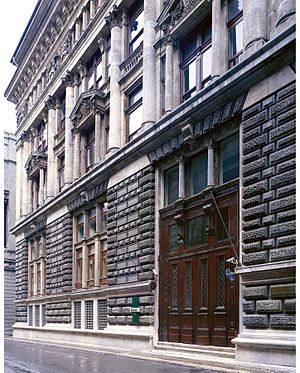 On February 4, 1863, seven years after its establishment, the shareholders of the Ottoman Bank signed a contract to form the Imperial Ottoman Bank. Sultan Abdülâziz, who expected to improve his country's economy, which was in a state of financial crisis after the Crimean War, ratified the contract immediately.

Tanzimat era's principal renovations in the financial field were the re-establishment of the currency and the foundation of the Ottoman Bank. The Ottoman Bank provided the Treasury with the necessary advances, played an intermediary role during the Ottoman public debt and acted as a bank of issue, principal function of state banks.

On February 18, 1875, the bank was authorized to control the budget, the expenditures and incomes of the state, to ensure reform and control the precarious Ottoman financial situation. The character of the Ottoman Bank as a state bank was fully reaffirmed by extending its right of issue for 20 years and conferring on it the role of Treasurer of the Empire.

The bank continued to help the Ottoman state through providing it several credits after the Balkan Wars, became a member of the Council of the Public Debt, and assumed the tobacco monopoly in a limited company. Following the re-establishment of Empire's credit standing, the placing of Turkish loans abroad became possible around 1886. Enabled by the reduction of commitments towards the Treasury around 1890, following the improvement of public finances, the Ottoman Bank undertook a double activity of financing the Turkish economy and promoting other business.

Within the frame of merchant banking activities, it was mainly involved with public works and railways, the Beirut Port, the railway line Beirut-Damascus and its later extension to Homs, Hamah and Aleppo. The Bank's financial support continued to some other railway projects including the line Constantinople-Salonica, Smyrna-Kasaba (1892) and the Baghdad Railway (1903). In 1896, the Bank played a major role in the establishment of the Ereğli coal mining company on the Black Sea shore. In August 1896, the bank was the subject of a seizure by Armenian Revolutionaries intent on bringing international attention to mistreatment of Armenians in the Ottoman Empire.

The declaration of World War I damaged the Bank, since it lost credibility with the Ottoman government because of its British and French shareholders, and on the other hand the British and French governments considered the bank as an institution belonging to the enemy. This caused particular problems in Cyprus, an Ottoman province administered by Britain up until the First World War, when the island was annexed in response to the Turks siding with the Central Powers. After an initial run on the bank in 1914 left the local operation of the bank with less than £4,000 sterling in its vaults, and no means of replenishing its reserves from the head office in Constantinople, the bank was briefly closed by the British authorities and then allowed to re-open effectively as a separate semi-state company. In part this compromise seems to have been reached as the British authorities in Cyprus had themselves deposited their entire funds in the bank in Cyprus, some £40,000 sterling, which would have been lost had the bank been forced to close.[1] But, with the exception of Cyprus, during this time, the British and French executives of the bank left their posts, and the Ottoman Government abolished the privilege of issuing banknotes. However, its other activities continued.

After the War of Independence and the proclamation of the Republic of Turkey, the regulation of the relations with the new state was set up on March 10, 1924. The name of the Bank was changed from the Imperial Ottoman Bank back to the Ottoman Bank. The Bank's role as a state bank remained, however it was extended on a temporary basis due to the Turkish government's intention to establish its own Central Bank, which was realized in 1931.

During the period after World War I, most of the branches had to be closed, while new branches were established in the Near East between 1920-1930 to serve British interests.

In 1933, the Ottoman Bank became a commercial bank, and finally in 1952 it turned into a private institution.

Following the Suez Canal crisis in 1956, Egyptian government nationalized all the five branches in the country. The Egyptian government established Bank Al-Goumhourieh to take over the Egyptian operations of Ionian Bank and the Ottoman Bank in the wake of the Suez Canal War. In 1958, the Bank extended its network to East African countries such as Kenya, Uganda, Tanzania and Rhodesia (now Zimbabwe) to meet the demand of its shareholders.

With the increasing trend of transferring foreign-owned banking business to local ownership in many countries, in 1969 the Bank sold its branches in London, Cyprus, Sudan, Jordan, East Africa, the Emirates and Rhodesia to National and Grindlays Bank. The branches in France and Switzerland it regrouped in a separate company called Banque Ottomane, which Grindlays Bank later bought.[2]

In 1996, the Ottoman Bank was sold to Doğuş Group, and from then on its commercial banking activity focused mainly on Turkey. On July 31, 2001, it merged with Körfez Bankasi. On December 21, 2001, it was incorporated in its principal shareholder, Garanti Bank. This led to the disappearance of the name Ottoman Bank from all remaining branches. At the time of its merger, the Ottoman Bank had a network of 58 branches and around 1,400 personnel.[3]

The Bank was an institution with no nationality in essence. However, the group of higher officials was the only level subject to a national criterion. For all other employees, from branch managers to clerks and servants, the Bank did not apply any policy depending on a criterion of nationality or ethnicity that resulted in a personnel pattern not observed in any other European bank.

The general manager and his deputy were British or French, reflecting the majority share held by the two nations. An exception was in the period during World War I, when the general manager and his deputy, being citizens of hostile countries, had been forced to leave the country. During this time, until they could return to their posts in 1918 following the Armistice of Mudros, the Bank was administered by Ottomans of Armenian and Greek ethnicity.

The top level officials and most of the branch managers were Europeans. The middle level officials and some branch managers were non-Muslim Ottomans of Greek, Armenian, Jewish and Christian Arab ethnicity. The bottom of the hierarchy was made up by Muslim Ottomans performing services as clerks, couriers, guards and doorkeepers.

Compared to the proportion of the different population of the empire, the number of the non-Muslim personnel was relatively high. The reason for this employment pattern was the background of non-Muslims with western language skills, accounting and banking education, and culturally western orientation. Such requirements for the occupations in the Ottoman Bank could be acquired mainly by non-Muslims up to the forming of the Republic of Turkey.[4]

From its beginning, the Bank continually opened new branches all around the Ottoman Empire, building a network of around 80 branches just before the outbreak of World War I. 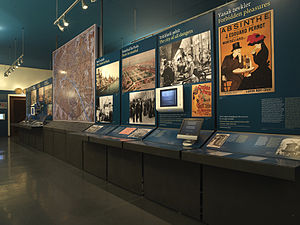 Ottoman Bank Museum: Prelude to the 1908 Revolution: The Ottomans in Paris

The Ottoman Bank headquarters on Voyvoda Street (a.k.a. Bankalar Caddesi, banks street) in Karaköy, Istanbul was built by renowned French-Turkish architect Alexander Vallaury in 1890, and used as the head office of the Ottoman Bank from its opening on 27 May 1892, until 1999. In addition to housing the Karaköy branch of Garanti Bank and its area directorates, the building was the site of the Ottoman Bank Museum and the Ottoman Bank Archives and Research Centre. The objects and documents displayed in the Ottoman Bank Museum provided insight into the late Ottoman and early Republican period, displaying the economic, social and political environment of the times through market operations, bank branches, customer files and personnel files in a combination of both chronological and thematic approaches.[5]

Four bank vaults, located at the center of the main exhibit hall, were used to display archival series such as stocks and bonds, accounting books, customer files, deposit cards, personnel files and photographs. The largest two-storied vault hosted the banknotes and silver coins issued between 1863 and 1914 together with the story, design, registration and samples of each.

Closed for construction in 2009, the Ottoman Bank building reopens 22 November 2011 as SALT Galata, one of two buildings hosting the activities of the cultural institution SALT. SALT Galata houses the Ottoman Bank Museum, and makes the full holdings of the Ottoman Bank Archives and Research Centre's library and archives available to the public via SALT Research.[6]