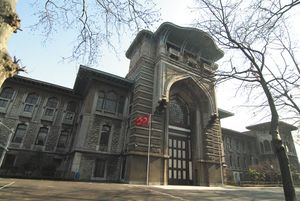 The Ottoman Public Debt Administration (OPDA) (Ottoman Turkish: Düyun-u Umumiye-i Osmaniye Varidat-ı Muhassasa İdaresi, or simply Düyun-u Umumiye as it was popularly known), was a European-controlled organization that was established in 1881 to collect the payments which the Ottoman Empire owed to European companies in the Ottoman public debt. The OPDA became a vast, essentially independent bureaucracy within the Ottoman bureaucracy, run by the creditors and its governing council was packed with European government officials.[1] It employed 5,000 officials who collected taxes that were then turned over to the European creditors.[2] At its peak it had 9,000 employees, more than the empire’s finance ministry.[3]

The OPDA played an important role in Ottoman financial affairs. Also, it was an intermediary with European companies seeking investment opportunities in the Ottoman Empire. In 1900, the OPDA was financing many railways and other industrial projects. The financial and commercial privileges of the non-Muslim foreigners were protected with the capitulations of the Ottoman Empire.

After the dissolution of the Ottoman Empire, between 1918 and 1924 Ottoman revenue stamps overprinted O.P.D.A. or A.D.P.O., or stamps printed with those inscriptions, were issued for use in Palestine, Transjordan, Syria and Lebanon.