Ottoman Turkish /ˈɒtəmən/, or the Ottoman language (لسان عثمانى‎‎ Lisân-ı Osmânî) (also known as تركچه‎ Türkçe or تركی‎ Türkî, "Turkish"), is the variety of the Turkish language that was used in the Ottoman Empire. It borrows, in all aspects, extensively from Arabic and Persian, and was written in the Ottoman Turkish alphabet. During the peak of Ottoman power, Persian and Arabic vocabulary accounted for up to 88% of its vocabulary,[1] while words of Arabic origins heavily outnumbered native Turkish words.[2] Consequently, Ottoman Turkish was largely unintelligible to the less-educated lower-class and rural Turks, who continued to use kaba Türkçe ("raw Turkish"), which used far fewer foreign loanwords and which is the basis of the modern Turkish language.[3] The Tanzimât era saw the application of the term "Ottoman" when referring to the language (لسان عثمانی‎ lisân-ı Osmânî or عثمانلوجه‎ Osmanlıca) and the same distinction is made in Modern Turkish (Osmanlıca and Osmanlı Türkçesi). 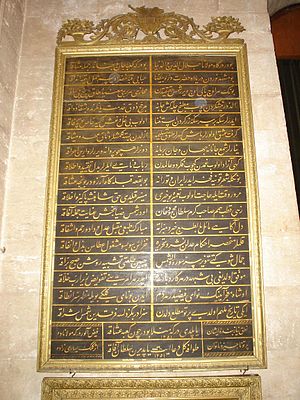 A poem about Rumi in Ottoman Turkish.

The conjugation for the aorist tense is as follows:

Ottoman Turkish was highly influenced by Persian and Arabic. At a point, Arabic and Persian words in the language amounted for up to 88% of its vocabulary, at a peak.[1] As in most other Turkic and other foreign languages of Islamic communities, initially the Arabic borrowings were not the result of a direct exposure of Ottoman Turkish to Arabic, a fact that is evidenced by the typically Persian phonological mutation of the words of Arabic origin.[5][6][7] The conservation of archaic phonological features of the Arabic borrowings furthermore suggests that Arabic-incorporated Persian was absorbed into pre-Ottoman Turkic at an early stage, when the speakers were still located to the northeast of Persia, prior to the westward migration of the Islamic Turkic tribes. An additional argument for this is that Ottoman Turkish shares the Persian character of its Arabic borrowings with other Turkic languages that had even less interaction with Arabic, such as Tatar and Uygur. From the early ages of the Ottoman Empire, borrowings from Arabic and Persian were so abundant that original Turkish words were hard to find.[8] In Ottoman, one may find whole passages in Arabic and Persian incorporated into the text.[8] It was however not only extensive loaning of words, but along with them much of the grammatical systems of Persian and Arabic.[8]

In a social and pragmatic sense, there were (at least) three variants of Ottoman Turkish:

A person would use each of the varieties above for different purposes. For example, a scribe would use the Arabic asel (عسل) to refer to honey when writing a document, but would use the native Turkish word bal when buying it.

For more details on this topic, see Turkish language.

In 1928, following the fall of the Ottoman Empire after World War I and the establishment of Republic of Turkey, widespread language reforms (a part in the greater framework of Atatürk's Reforms) instituted by Mustafa Kemal Atatürk saw the replacement of many Persian and Arabic origin loanwords in the language with their Turkish equivalents. It also saw the replacement of the Perso-Arabic script with the extended Latin alphabet. The changes were meant to encourage the growth of a new variety of written Turkish that more closely reflected the spoken vernacular, as well as to foster a new variety of spoken Turkish that more explicitly reflected Turkey's new national identity as being a post-Ottoman state.

See the list of replaced loanwords in Turkish for more examples on Ottoman Turkish words and their modern Turkish counterparts. Two examples of Arabic and two of Persian loanwords are found below.

Historically speaking, Ottoman Turkish is not the predecessor of modern Turkish. Rather the standard Turkish of today is essentially Türkiye Türkçesi (Turkish of Turkey) as written in the Latin alphabet and with an abundance of neologisms added, which means there are now many fewer loan words from other languages. However, Ottoman was not transformed into the Turkish of today instantly. At first, it was only the script that was changed (many households, however, continued to use the Arabic system), then the loan words were taken out and then new words to fit the growing amount of technology were introduced. Up until the 1960s, Ottoman Turkish was at least partially intelligible with the Turkish of that day. One major difference between modern Turkish and Ottoman Turkish is the former's abandonment of compound word formation according to Arabic and Persian grammar rules. The usage of such phrases still exists in modern Turkish, but only to a very limited extent and usually in specialist contexts; for example, the Persian genitive construction takdîr-i ilâhî (which reads literally as "the preordaining of the divine", and translates as "divine dispensation" or "destiny") is used, as opposed to the normative modern Turkish construction, ilâhî takdîr (literally, "divine preordaining"). 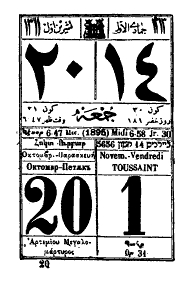 Calendar in Thessaloniki 1896, a cosmopolitan city; the first 3 lines in Ottoman script

Ottoman Turkish was primarily written in the Ottoman Turkish alphabet (elifbâ الفبا), a variant of the Perso-Arabic script. The Armenian, Greek, and Rashi script of Hebrew were also used by Armenians, Greeks, and Jews.