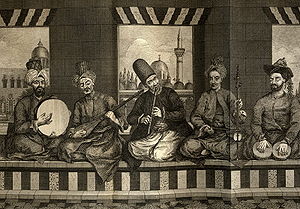 Ottoman music has a large and varied system of modes or scales known as makams, and other rules of composition. There are more than 600 makams that have been used so far. Out of these, at least 119 makams are formally defined, but today only around 20 makams are widely used. In the Sufi teaching, each makam represents and conveys a particular psychological and spiritual state. Sometimes, in certain makams, Ottomans would use different instrumental and vocal musical pieces in order to cure certain medical and psychological conditions.

A number of notation systems were used for transcribing classical music, the most dominant being the Hamparsum notation in use until the gradual introduction of western notation. Turkish classical music is taught in conservatories and social clubs, the most respected of which is Istanbul's Üsküdar Musiki Cemiyeti.

A specific sequence of classical Turkish musical forms become a fasıl, a suite an instrumental prelude (peşrev), an instrumental postlude (saz semaisi), and in between, the main section of vocal compositions which begins with and is punctuated by instrumental improvisations (taksim).[2] A full fasıl concert would include four different instrumental forms and three vocal forms, including a light classical song, şarkı. A strictly classical fasıl remains in the same makam throughout, from the introductory taksim to the end, which is usually a dance tune or oyun havası.[3] However shorter şarkı compositions, precursors to modern day songs, are a part of this tradition, many of them extremely old, dating back to the 14th century; many are newer, with late 19th century songwriter Haci Arif Bey being especially popular.

Ottoman classical music comprises many vocal and instrumental forms, among which are the suites called fasıl. A fasıl typically includes many instrumental and/or vocal movements, including taksim, peşrev, şarkı, beste, and kar, among others.