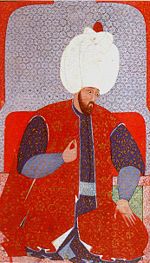 Ottoman clothing is the style and design of clothing worn by the Ottoman Turks. 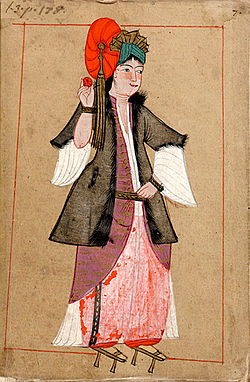 A stylish young woman of the mid-17th century. She wears salwar (trousers), a long, sheer pirihan (chemise), and an ankle-length purple entari (outer robe) with the ends tucked up. The fur lining of her yelek (jacket or vest) marks her as wealthy and high-ranking.

While the Palace and its court dressed lavishly, the common people were only concerned with covering themselves. Starting in the reign of Suleiman the Magnificent, administrators enacted sumptuary laws upon clothing. The clothing of Muslims, Christians, Jewish communities, clergy, tradesmen, and state and military officials were particularly strictly regulated during the reign of Suleiman the Magnificent.

Bashlyks, or hats, were the most prominent accessories of social status. While the people wore "külah's" covered with 'abani' or 'Yemeni', the cream of the society wore bashlyks such as 'yusufi, örfi, katibi, kavaze', etc. During the rule of Süleyman a bashlyk called 'perişani' was popular as the palace people valued bashlyks adorned with precious stones. 'Kavuk', however, was the most common type of bashlyk. For this reason, a related tradesmenship was formed in the 17th century. Fur was a material of prestige in that period. Political crises of the 17th century were reflected as chaos in clothes. The excessively luxurious compulsion of consumption and showing off in the Tulip Era lasted till the 19th century. The modernization attempts of Mahmut II in 1825 first had its effects in the state sector. While 'sarık' was replaced by 'fez', the people employed in Bab-ı Ali began to wear trousers, 'setre' and 'potin'.

During the 'Tanzimat' and 'Meşrutiyet' period in the 19th century, the common people still keeping to their traditional clothing styles presented a great contrast with the administrators and the wealthy wearing 'redingot', jacket, waistcoat, boyunbağı (tie), 'mintan', sharp-pointed and high-heeled shoes. Women's clothes of the Ottoman period were observed in the 'mansions' and Palace courts. 'Entari', 'kuşak', 'şalvar', 'başörtü', 'ferace' of the 19th century continued their existence without much change. In the 16th century women wore two-layer long 'entari' and 'tül', velvet shawl on their heads. Their outdoor clothing consisted of 'ferace' and 'yeldirme'. The simplification in the 17th century was apparent in an inner 'entari' worn under short-sleeved, caftan-shaped outfit and the matching accessory was a belt.

Women's wear becoming more showy and extravagant brought about adorned hair buns and tailoring. Tailoring in its real sense began in this period. The sense of women's wear primarily began in large residential centers such as Istanbul and İzmir in the 19th century and as women gradually began to participate in the social life, along with the westernization movement. Pera became the center of fashion and the Paris fashion was followed by the tailors of Greek and Armenian origin. In the period of Abdul Hamid II the use of 'ferace' (a concealing outer robe shaped like a modestly cut version of the indoor dress) was replaced by 'çarşaf' of different styles. However, the rural sector continued its traditional style of clothing.

The clothing styles prevailing until the mid 19th century imposed by religious reasons entered a transformation phase of the Republican period. In this period the 'şapka' and the following 'kılık kıyafet' reform realized with the leadership of Mustafa Kemal Atatürk in Kastamonu in 1925 had a full impact in Istanbul. Women's 'çarşaf' and 'peçe' were replaced by coat, scarf and shawl. Men began to wear hats, jackets, shirts, waistcoats, ties, trousers and shoes. With the industrialization process of the 1960s women entered the work life and tailors were substituted by readymade clothes industry. The contemporary fashion concept, as it is in the whole world, is apparent in both social and economic dimensions in Turkey as well.