Ottoman invasion of the Balearic Islands (1558) 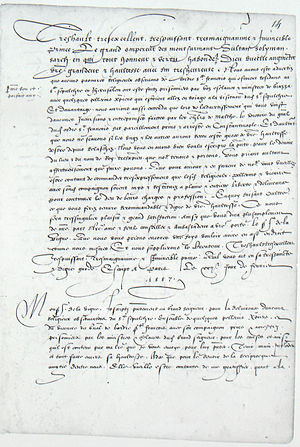 On 30 December 1557, Henry II of France, who was in conflict with the Habsburgs in the Italian War of 1551–1559, had written a letter to Suleiman, asking him for money, saltpeter, and 150 galleys to be stationed in the West. Through the services of his ambassador Jean Cavenac de la Vigne, Henry II obtained the dispatch of an Ottoman fleet in 1558.[4]

Suleyman the Magnificent sent his fleet as a diversion to help his French allies against the Habsburgs. The Ottoman armada left Constantinople in April 1558. On June 13, 1558, the Ottoman fleet ravaged Italy, with little effect however apart from the sack of Sorrento, then part of the possessions of Spain in southern Italy, where they took 3,000 captives.[5]

In July, the fleet then started to ravage the Balearic islands.[6]

The Ottoman force consisted in 15,000 soldiers on 150 warships. The Ottomans, after repulsing an attack on Mahón, attacked the citadel of Ciutadella in Menorca, which was only garrisoned with 40 soldiers.[7]

On the 9th of July 1558, the Turks under Piyale Pasha and Turgut Reis, put the town under siege for eight days entered and decimated the town. After the fall of the citadel, the city was ravaged and the population enslaved.[7] All of Ciutadella's 3,099 inhabitants who survived the siege were taken as slaves to Turkey together with other inhabitants of surrounding villages. In total, 3,452 residents were sold into slavery in the slave markets of Constantinople.

The Balearic islands were ravaged, and 4,000 people were taken as prisoners.[8]

An obelisk was set up in the 19th century by Josep Quadrado in the Plaza d'es Born in memory of the offensive, with the following inscription:

Every year on July 9, a commemoration takes place in Ciutadella, remembering "l’Any de sa Desgràcia", or "the Year of the Disaster".[1]

As a later consequence of the 1553 Franco-Ottoman Invasion of Corsica, the same Ottoman fleet was delayed from joining a French fleet in Corsica near Bastia, possibly due to the failure of the commander Dragut to honour Suleiman's orders. Suleiman would apologize in a letter to Henry at the end of the year 1558.[9][10]