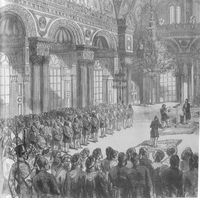 Proclamation of the Ottoman Constitution of 1876

Ottomanism (Osmanlılık or Osmanlıcılık) was a concept which developed prior to the First Constitutional Era of the Ottoman Empire. Its proponents believed that it could solve the social issues that the empire was facing. Ottomanism was strongly influenced by thinkers such as Montesquieu and Rousseau and the French Revolution. It promoted equality among the millets. The idea originated amongst the Young Ottomans in areas such as the acceptance of all separate ethnicities in the Empire regardless of their religion, i.e. they were all 'Ottomans' with equal rights. Put simply, Ottomanism stated that all subjects were equal before the law. The essence of the millet system was not dismantled, but secular organizations and policies were applied. Primary education, conscription, head tax and military service were to be applied to non-Muslims and Muslims alike.

The major precursors to Ottomanism were the Reformation Edict of 1856, which promised full equality regardless of religion, and the Ottoman Nationality Law of 1869, which created a common Ottoman citizenship irrespective of religious or ethnic affiliation. Ottomanism was rejected by many in the non-Muslim millets and by many Muslims. To the former, it was perceived as a step towards dismantling their traditional privileges. Meanwhile, the Muslims saw it as the elimination of their own superior position. There were claims that Ottomanism was a reaction to the Tanzimat, the era of intensive restructuring of the Ottoman Empire by the bureaucratic elite. The inauguration of the Ottoman Parliament contributed to the spirit of reform as all millets were represented in this bicameral assembly.

Ottomanism enjoyed a revival during the Young Turk Revolution of 1908, and during the Second Constitutional Era. It lost most of its adherents during the First Balkan War of 1912–1913.

Ottomanism and the Removal of Abdul Hamid II