From Infogalactic: the planetary knowledge core
Jump to: navigation, search
For other uses, see Oud (disambiguation).

The oud (/uːd/; Arabic: عود‎‎ ʿūd  Arabic pronunciation: [ʕu(ː)d, ʢuːd], plural: أعواد aʿwād; Armenian: ուդ, Syriac: ܥܘܕ ūd, Greek: ούτι oúti; Hebrew: עוּד‎ ud; Persian: بربط‎‎ barbat; Kurdish: ûd‎; Turkish: ud or ut;[1] Azeri: ud; Somali: cuud or kaban) is a pear-shaped stringed instrument commonly used in Persian, Arabic, Greek, Turkish, Jewish, Byzantine, Azerbaijani, Armenian, North African (Chaabi, Classical, and Spanish Andalusian), Somali and Middle Eastern music. Construction of the oud is similar to that of the lute.[2] The modern oud and the European lute both descend from a common ancestor via diverging paths. One instrument that has been suggested as ancestral is the Barbat.[3] The oud is readily distinguished from the lute by its lack of frets and smaller neck. Alongside the lute, it is considered an ancestor of the guitar.[4]

The origin of the name oud (and its etymological cousin, lute) for the musical instrument is uncertain. The Arabic: العود‎‎ (al-ʿūd) literally denotes a thin piece of wood similar to the shape of a straw. It may refer to the wooden plectrum traditionally used for playing the oud, to the thin strips of wood used for the back, or to the wooden soundboard that distinguished it from similar instruments with skin-faced bodies.[5]

Research by Eckhard Neubauer suggests that oud may simply be an Arabic borrowing from the Persian word rōd or rūd, which meant string, stringed instrument, or lute.[6][7] Eckhart had been cited in articles in the Encyclopædia Iranica.[8]

Another researcher, archaeomusicologist Richard J. Dumbrill, suggests that rud came from the Sanskrit rudrī (stringed instrument) and transferred to Arabic through a semitic language.[9]

See also: Lute § History and evolution of the lute
An oud being played

The oud was created during the early pharaonic era, and according to Farabi, the oud was invented by Lamech, the sixth grandson of Adam. However, there is no historical basis for such legends.

The oldest pictorial record of a lute dates back over 5000 years ago, on a cylinder seal from the Uruk period in northern Syria, Mesopotamia. Acquired by Dr. Dominique Collon, the artifact is currently housed at the British Museum.[10] 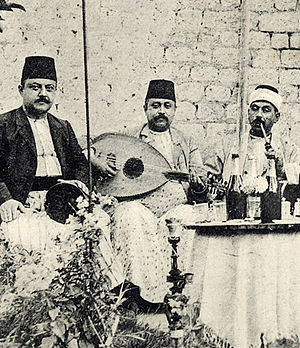 Syrian musicians in Aleppo with an oud, circa 1915.

The Turkic peoples had a similar instrument called the kopuz. This instrument was thought to have magical powers and was brought to wars and used in military bands. This is noted in the Göktürk monument inscriptions. The military band was later used by other Turkic state's armies and later by Europeans.[11]

The oud has a particularly long tradition in Iraq,[12] where a saying goes that in its music lies the country’s soul.[12] A ninth-century Baghdad jurist praised the healing powers of the instrument, and the 19th-century writer Muhammad Shihab al-Din related that it "places the temperament in equilibrium" and "calms and revives hearts."[12] Following the invasion of Iraq and the overthrow of the Ba'athist regime in 2003, however, the increasing fervor of Islamic militants who consider secular music to be haraam (sinful) forced many oud players and teachers into hiding or exile.[12] 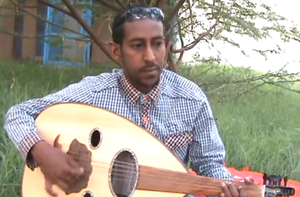 Modern-day ouds fall into two categories: Arabic and Turkish. This distinction is not based solely on geography since Turkish ouds can also be found in Greece and occasionally other parts of the Mediterranean, whereas Arabic ouds can be found in various locations all over the Arab world. The Arabic ouds, such as the Iraqi oud, Egyptian oud and Syrian oud, are normally grouped under the term 'Arabic oud' because of their similarities.[13]

Arabic ouds are normally larger than their Turkish counterpart, producing a fuller, deeper sound, whereas the sound of the Turkish oud is more taut and shrill, not least because the Turkish oud is tuned one whole step higher than the Arabic. Turkish ouds tend to be more lightly constructed than Arabic with an unfinished sound board, lower string action and with string courses placed closer together. Arabic ouds have a scale length of between 61 cm and 62 cm in comparison to the 58.5 cm scale length for Turkish.[14]

The Cümbüş is a Turkish instrument that started as a hybrid of the oud and the banjo.