From Infogalactic: the planetary knowledge core
Jump to: navigation, search
Not to be confused with Ouija.

Maria Louise Ramé was born at Bury St. Edmunds, England.[2] Her mother, Susan Sutton, was a wine merchant's daughter;[3] her father was from France.[2][4] She derived her pen name from her own childish pronunciation of her given name "Louise".[5] Her opinion of her birthplace fluctuated; she wrote:

That clean, quiet antiquated town, that always puts me in the mind of an old maid dressed for a party; that lowest and dreariest of Boroughs, where the streets are as full of grass as an acre of pasture land. Why, the inhabitants are driven to ringing their own doorbells lest they rust from lack of use.[6]

She moved into the Langham Hotel, London in 1867. There, according to the hotel promotional materials, she wrote in bed, by candlelight, with the curtains drawn and surrounded by purple flowers.[7] She ran up huge hotel and florists bills, and commanded soirees that included soldiers, politicians, literary lights (including Oscar Wilde, Algernon Swinburne, Robert Browning and Wilkie Collins), and artists (including John Millais).[5] Many of her stories and characters were based upon people she invited to her salons at The Langham.[7] Ouida was described by William Allingham in his diary of 1872 as of short stature, with a "sinister, clever face" and with a "voice like a carving knife."[8] 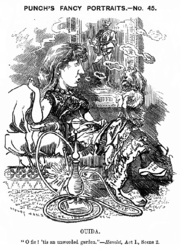 For many years Ouida lived in London, but about 1871 she moved to Italy. In 1874, she settled permanently with her mother in Florence, and there long pursued her work as a novelist. At first she rented an 'apartment' at the Palazzo Vagnonville. Later she removed to the Villa Farinola at Scandicci, south of Bellosguardo, three miles from Florence, where she lived in great style, entertained largely, collected objets d'art, dressed expensively but not tastefully, drove good horses, and kept many dogs, to which she was deeply attached. She lived in Bagni di Lucca for a period, where there is a commemorative plaque on the outside wall. She declared that she never received from her publishers more than £1600. for any one novel, but that she found America "a mine of wealth." In The Massarenes (1897) she gave a lurid picture of the parvenu millionaire in smart London society. This book was greatly prized by Ouida, and was very successful in terms of sales. Thenceforth she chiefly wrote for the leading magazines essays on social questions or literary criticisms, which were not remunerative.[8] As before, she used her locations as inspiration for the setting and characters in her novels. The British and American colony in Florence was satirised in her novel, Friendship (1878).[9] Ouida considered herself a serious artist. She was inspired by Byron in particular, and was interested in other artists of all kinds. Sympathetic descriptions of tragic painters and singers occurred in her later novels. Her work often combines romanticism with social criticism. In her novel, Puck, a talking dog narrates his views on society. Views and Opinions includes essays in her own voice on a variety of social topics. She was an animal lover and rescuer, and at times owned as many as thirty dogs. 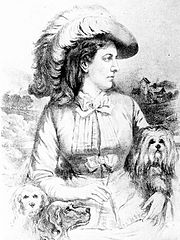 Although successful, she did not manage her money well. A civil list pension of £150 a year was offered to her by the prime minister, Sir Henry Campbell-Bannerman, on the application of Alfred Austin, George Wyndham, and Walburga, Lady Paget, which she reluctantly accepted after request by her friend, Lady Howard of Glossop, on 16 July 1906.[10]

She continued to live in Italy until her death on 25 January 1908, at 70 Via Zanardelli, Viareggio, of pneumonia[5] She is buried in the English Cemetery in Bagni di Lucca, Italy.

During her career, Ouida wrote more than 40 novels, children's books and collections of short stories and essays. Her work had several phases.

In 1863, when she was 24, she published her first novel, Held in Bondage.[5] (She later claimed to have written her well-received novel Idalia (1867) at the age of 16. It featured a rebellious ingenue heroine who was sympathetic to Italian independence.)[citation needed]

In her early period, her novels were considered "racy" and "swashbuckling", a contrast to "the moralistic prose of early Victorian literature" (Tom Steele),[5] and a hybrid of the sensationalism of the 1860s and the proto-adventure novels being published as part of the romanticisation of imperial expansion. Later her work was more typical of historical romance, though she never stopped comment on contemporary society. She also wrote several stories for children.

Under Two Flags, one of her most well-known novels, described the British in Algeria. It expressed sympathy for the French colonists (called pieds noirs)—with whom Ouida deeply identified—and, to some extent, the Arabs. This book was adapted as dramatic plays, and was adapted six times as a film.[11] The American author Jack London cited her novel Signa, which he read at age eight, as one of the eight reasons for his literary success.[12]

The British composer Frederic Hymen Cowen and his librettists Gilbert Arthur à Beckett, H.A. Rudall, and Frederic Edward Weatherly acquired the rights to Ouida's 1875 novel Signa to create an opera for Richard D'Oyly Carte's Royal English Opera House to succeed Arthur Sullivan's Ivanhoe in 1891. Between Cowen not being ready with his work and the collapse of Carte's venture, Cowen eventually took his finished Signa to Italy with an Italian translation of the original English text by G.A. Mazzucato. After many delays and production troubles, Cowen's Signa was first performed in a reduced three-act version at the Teatro Dal Verme, Milan on 12 November 1893. After further revision and much cutting, it was later given in a two-act version at Covent Garden, London on 30 June 1894, at which point Cowen wondered if there was any sense left in the opera at all. Ouida's impression of the work is unknown.[citation needed] 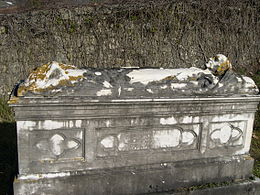 Later, Pietro Mascagni bought the rights for her story "Two Little Wooden Shoes", intending to adapt it for an opera. His friend Giacomo Puccini became interested in the story and began a court action, claiming that because Ouida was in debt, the rights to her works should be put up for public auction to raise funds for creditors. He won the court challenge and persuaded his publisher Ricordi to bid for the story. After Ricordi won, Puccini lost interest and never composed the opera. Mascagni later composed one based on the story, under the title Lodoletta.[citation needed]

Soon after her death, her friends organized a public subscription in Bury St Edmunds, where they had a fountain for horses and dogs installed in her name.[13] Its inscription was composed by Lord Curzon:

Her friends have erected this fountain in the place of her birth. Here may God's creatures whom she loved assuage her tender soul as they drink.

Fellow author Eliza Humphreys wrote a eulogy to Ouida and sent it to the press soon after her death. It was read at the unveiling of Ouida’s memorial. During Humphrey's youth, Ouida had been popular but the girl was forbidden to read her. She made up for it later by purchasing every book written by Ouida and keeping them in her library for the rest of her life.[14] 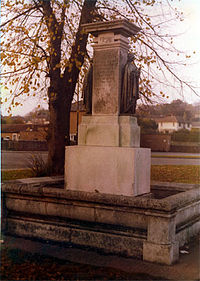 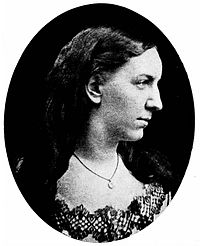 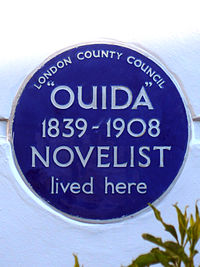