Our Lady of Perpetual Help

The icon has been in Rome since 1499, and is permanently enshrined in the church of Sant'Alfonso di Liguori, where the official Novena to Our Mother of Perpetual Help text is prayed weekly. In the Eastern Orthodox Church, this artistic iconography is known as the Virgin of the Passion or Theotokos of the Passion due to the instruments of the Passion present on the image.

Due to the Redemptorist Priests, who had been appointed as both custodians and missionaries of this icon by Pope Pius IX in 1865, the image has become very popular among Roman Catholics in particular, and has been very much copied and reproduced. Modern reproductions are sometimes displayed in homes, business establishments, and public transportation.

On 23 June 1867, the image was granted a Canonical Coronation and its official recognition of the Marian icon under its present title. The Redemptorist priests are the only religious order currently entrusted by the Holy See to protect and propagate a Marian religious work of art.[1]

Detail of the icon, showing the Archangel Michael.

The original wooden icon, suspended on the altar, measures 17" × 21" inches and is written on hard nut wood with a gold leaf background.[2] The image depicts the Blessed Virgin Mary wearing a dress of dark red, representing the Passion of Jesus, with a blue mantle, representing her perpetual virginity, and cloaked veil, which represents her pure modesty. The icon shows Mary looking towards the faithful, while pointing at her son, Jesus Christ who is frightened by the instruments of crucifixion and is depicted with a fallen sandal. On the left side is Saint Michael, carrying the lance and sponge of the crucifixion of Jesus. On the right is Saint Gabriel carrying a 3-bar cross used by Popes at the time and nails. The Virgin Mary has a star on her forehead, signifying her role as Star of the Sea while the cross on the side has been claimed as referring to the school which produced the icon. The Byzantine depictions of the Blessed Virgin Mary in art have three stars, one star each on the shoulder and one on the forehead. This type of icon is called Hodegetria, where Mary is pointing to her Son, known as a Theotokos of the Passion.[3]

Mary's long slender nose, thin lips, and smoothly arched eyebrows also show that a Greek artist wrote the Icon. The halo and the crown in the picture were added later. In those days, a halo was not commonly painted around the head. Instead, as in this Icon of Mary, the veil and her face itself were rounded, practically circular, to indicate her holiness. The size of the mother seems out of proportion to her son; this is deliberate. The artist wished to emphasize Mary in this story, so he painted her larger than life.[4] 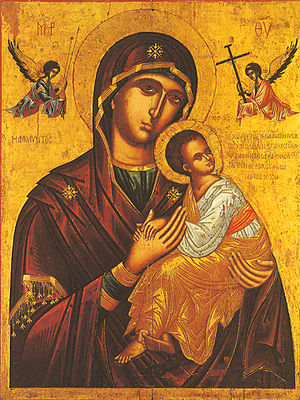 Eastern Orthodox icon of the Theotokos of the Passion

The Greek inscriptions read MP-ΘΥ (Μήτηρ Θεοῦ, Mother of God), OAM (Ὁ Ἀρχάγγελος Μιχαήλ, Michael the Archangel), OAΓ (Ὁ Ἀρχάγγελος Γαβριήλ, Gabriel the Archangel) and IC-XC (Ἰησοῦς Χριστός, Jesus Christ), respectively. The icon is written with a gold background on a walnut panel which was probably done in the islands of Crete, which at the time was then ruled by the Republic of Venice.[5] The Cretan School was the source of the many icons imported into Europe from the late Middle Ages through the Renaissance. The gold background represents the Kingdom of God.[6] The round halo surrounding the Virgin Mary's head is styled called Estofado, which is an artistic effect created by making dented holes into the icon to reflect light from the gold background. The icon was cleaned and restored once in 1866 and again in the year 1940.

Some believe the icon to be a true copy of a painting that according to legend was painted by Saint Luke using the meal table of the Holy Family in Nazareth, and in Eastern Orthodox tradition was often identified with the Hodegetria icon,[7] and consider it to be a miraculous imprint of the Virgin Mary both in the Latin and Orthodox communities.

Close-up of the Archangel Gabriel.

The earliest written account of the image comes from a Latin and Italian plaque placed in the church of San Matteo in Via Merulana where it was first venerated by the public in 1499. The writer of the icon is unknown, but according to a parchment attached to the painting[8] that accompanied the icon, it was stolen by a merchant sailing to Rome from the island of Crete, also sometimes referred to as Candia or Heraklion.

After stealing the icon, the ageing merchant sailed and hid the icon while traveling at sea, until a storm hit hard and the sailors prayed with the icon for help. When the merchant arrived in Rome he fell ill, and as a dying wish he asked a second merchant to place the icon in a church where it could serve for veneration.[9] Initially, the merchant was reluctant to give the icon away and took four instances[clarification needed] until the second merchant confided to his wife about the icon. Upon seeing the beautiful icon, the woman refused to give it to the church but instead hung it in their home.

Later on, the Virgin Mary is said to have appeared to the merchant's daughter, grandmother and neighbor, who implored that the icon be turned over to a parish.[8] The Virgin Mary allegedly appeared to the little girl that the icon ought to be placed between the basilicas of St. Mary Major and St. John Lateran. The wife gave the icon to the Augustinian Friars. On March 27, 1499, the icon was transferred to the church of San Matteo where it remained for 300 years.[8] The picture was then popularly called the Madonna di San Matteo.[10]

In 1798, French troops under Louis-Alexandre Berthier occupied Rome as part of the French Revolutionary Wars, establishing the short-lived Roman Republic and taking Pope Pius VI prisoner. Among the several churches demolished during the French occupation was San Matteo in Via Merulana, which housed the icon.[11] The Augustinian friars who rescued the icon first took it to the nearby Church of St. Eusebius, then later set it up on a side altar in the Church of Santa Maria in Posterula.

In January 1855, the Redemptorist priests purchased Villa Caserta in Rome along the Via Merulana and converted it into their headquarters. Without realizing it, the property they had purchased was once the church and monastery of Saint Matthew, the site which the Virgin allegedly chose as the icon's shrine.[1] 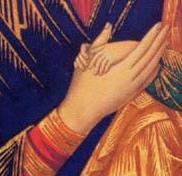 Detail of the hands of the virgin.

Pope Pius, who as a boy had prayed before the picture in San Matteo, became interested in the discovery and in a letter dated 11 December 1865 to Father General Mauron, C.Ss.R., ordered that Our Lady of Perpetual Succour should be again publicly venerated in Via Merulana, and this time at the new church of St. Alphonsus.[10] Pope Pius IX directed the Augustinian friars to surrender the icon to the Redemptorist priests, on condition that the Redemptorists must supply the Augustinians with another picture of Our Lady of Perpetual Help or a good copy of the icon in exchange as a gesture of goodwill.[9] Pope Pius IX instructions to the Redemptorists were:

The Cardinal Prefect of Propaganda will call the Superior of the community of Sancta Maria in Posterula and will tell him that it is Our desire that the image of Most Holy Mary, referred to in this petition, be again placed between Saint John and St. Mary Major; the Redemptorists shall replace it with another adequate picture.[12]

Upon its official transfer, Pope Pius IX finally gave his Apostolic Blessing and titled the icon Mater de Perpetuo Succursu (Mother of Perpetual Help). On 23 June 1867, the image was given a Canonical Coronation by the Dean of the Vatican Chapter in a solemn and official recognition of the Marian icon under that title.[13] On 21 April 1866, the Redemptorist Superior General gave one of the first copies of the icon to Pope Pius IX. This copy is preserved in the chapel of the Redemptorists' Generalate in Rome. The original icon remains under the care of the Redemptorist Fathers at the Church of St. Alphonsus with the latest restoration of the icon having taken place in 1990.[12] 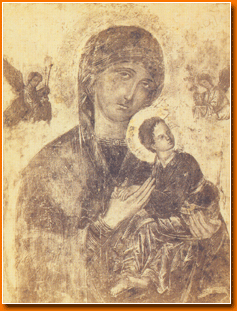 The icon damaged by incense smoke and timely discoloration, prior to its restoration.

In 1990, the icon was taken down from its altar for new photography and image restoration commissioned by the General Government of Redemptorists. The Redemptorist Order entered into contract with the Technical Department at the Vatican Museum to restore the icon and prevent further fungal damage to the icon. The restoration process involved X-ray, infra-red scanning, technical analysis of the paint and ultra-violet testing along with a Carbon-14-test which placed the icon between the year 1325-1480. Artistic analysis of the icon revealed that the facial structure of the icon was altered due to previous overpainting, resulting in a combination of "oriental and occidental" features of the image.[14]

In 1878, the Basilica and Shrine of Our Lady of Perpetual Help in Boston, Massachusetts obtained a certified copy of the icon being the first in the United States. Between 1927 and 1935, the first American novena service dedicated to the icon was recited in Saint Alphonsus "The Rock" church in St. Louis, Missouri and various other Redemptorist stations around the United States. 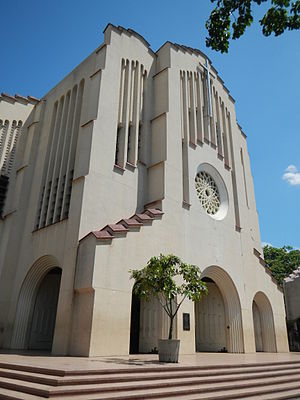 Authorised by the Holy See to remain open 24/7 days all year, the National Shrine of Our Mother of Perpetual Help (also known as Baclaran Church), is one of the largest known Marian shrines in the Philippines.

Our Lady of Perpetual Help is informally known in the country as the Holy Virgin of Baclaran, and is widely venerated by Filipino Catholics and Overseas Filipino communities. A German copy of the icon is venerated in the National Shrine of Our Mother of Perpetual Help in Baclaran, Parañaque, Metro Manila. Pope John Paul II once said Mass at the shrine as cardinal, and later prayed before the icon during his first pastoral visit to the country in February 1981.

All Catholic churches and chapels in the Philippines enshrine a replica of the icon, often on a side altar, with many congregations holding recitations of the rosary and the icon's associated novena, Benedictions, and Holy Mass every Wednesday in its honour. Copies are also commonly displayed in houses, businesses, and public transport.[15][16][17] Devotees today still use the same Novena booklet first published by Irish Redemptorist priests, who introduced the icon and its devotion to the Philippines in the 1900s. The Filipino Diaspora have also preserved observance of the Wednesday Novena, organising and participating at novena services in their respective parishes.[18][19]

The town of Almoradi, Spain invokes the patronage of Our Mother of Perpetual Help. In 1918, the son of Marquis of Rioflorido, Jose Carlos fell ill with pleurisy. His mother, the noble lady Desamparado Fontes fed him a silk fabric cloth touched to the icon of Perpetual Help in Rome which resulted in an instantaneous healing later claimed to be miraculous. As a token of thanksgiving, the lady Fontes officially donated funds to begin the Confraternity of Almoradi. On 29 May 1919, Our Lady of Perpetual Help was officially enthroned in Saint Andrew's Parish as the official patroness of the town. In 1945, Pope Pius XII confirmed this patronage by a pontifical decree. In 1969, a canonical coronation of this image was held and the crowns were made by Santero artist Jose David.

Our Lady of Perpetual Help is also the patron of the Diocese of Middlesbrough, in England.

Notable Parishes named in honor of Our Lady of Perpetual Help