Our Lady of Sorrows

From Infogalactic: the planetary knowledge core
Jump to: navigation, search
For the Marian apparition with the same title, see Our Lady of Kibeho.

The Seven Sorrows of Mary are a popular Roman Catholic devotion. In common religious Catholic imagery, the Blessed Virgin Mary is portrayed in a sorrowful and lacrimating affect, with seven daggers piercing her heart, often bleeding. Devotional prayers that consist of meditation began to elaborate on her Seven Sorrows based on the prophecy of the Rabbi Simeon. Common examples of piety under this title are Servite rosary, or the Chaplet of the Seven Sorrows of Our Lady and the Seven Joys of Mary and more recently, "Sorrowful and Immaculate Heart of Mary".

The Seven Sorrows (or Dolors) are events in the life of the Blessed Virgin Mary that are a popular devotion and are frequently depicted in art.[1]

It is a common devotion for Catholics to say daily one Our Father and seven Hail Marys for each.

These Seven Sorrows should not be confused with the five Sorrowful Mysteries of the Rosary. 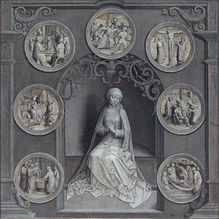 Mary surrounded by the Seven Sorrows

Devotions to the Seven Sorrows 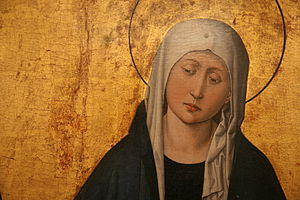 Archetypal Gothic Lady of Sorrows from a triptych by the Master of the Stauffenberg Altarpiece, Alsace c. 1455

The feast of the Our Lady of Sorrows was originated by a provincial synod of Cologne in 1423 as a response to the iconoclast Hussites. It was designated for the Friday after the third Sunday after Easter. It had the title: Commemoratio angustiae et doloris B. Mariae V.. Before the 16th century, the feast was celebrated only in parts of northern Europe.

Earlier, in 1233, seven youths in Tuscany founded the Servite Order (also known as the "Servite Friars", or the "Order of the Servants of Mary"). Five years later, they took up the sorrows of Mary, standing under the Cross, as the principal devotion of their order.[2]

Over the centuries several devotions, and even orders, arose around meditation on Mary's Sorrows in particular. The Servites developed the two most common devotions to Our Lady's Sorrows, namely the Rosary of the Seven Sorrows and the Black Scapular of the Seven Dolours of Mary. The Black Scapular is a symbol of the Confraternity of Our Lady of Sorrows, which is associated with the Servite Order.[3] Most devotional scapulars have requirements regarding ornamentation or design. The devotion of the Black Scapular requires only that it be made of black woollen cloth.[4] 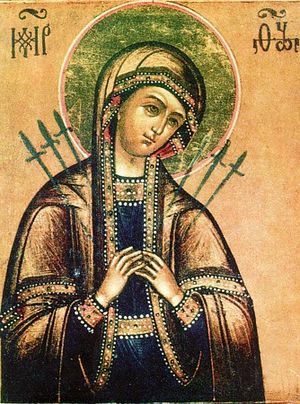 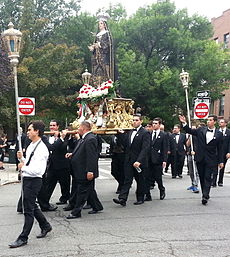 An annual Our Lady of Sorrows procession in Carroll Gardens, Brooklyn is a tradition begun in the 1940s by immigrants from Mola di Bari, celebrating their hometown patroness
See also: Eastern Orthodox iconography

On February 2, the same day as the Great Feast of the Meeting of the Lord, Orthodox Christians and Eastern Catholics commemorate a wonder-working icon of the Theotokos (Mother of God) known as "the Softening of Evil Hearts" or "Simeon's Prophecy".[5][6]

It depicts the Virgin Mary at the moment that Simeon the Righteous says, "Yea, a sword shall pierce through thy own soul also...." (Luke 2:35). She stands with her hands upraised in prayer, and seven swords pierce her heart, indicative of the seven sorrows.[5] This is one of the few Orthodox icons of the Theotokos which do not depict the infant Jesus. The refrain "Rejoice, much-sorrowing Mother of God, turn our sorrows into joy and soften the hearts of evil men!" is also used.[6] 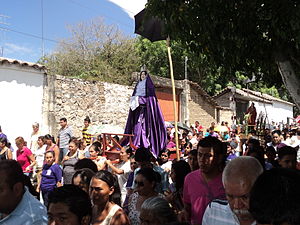 Procession in honor of Our Lady of Sorrows as part of Holy Week observances in Cocula, Guerrero, Mexico

The Third Order of the Servites of Mary at the Parish of Stella Maris Parish in Sliema was previously known as the Pia Unjone di Maria Desolata. In 1872 this was blessed by Pope (Blessed) Pius IX and by the Bishop of Malta Mgr Carmelo Scicluna in 1878.

On 8 September 1892 the Pia Unione was alleviated to a Third Order by a Decree of the Prior General of the Order of the Servites of Mary and with another Decree by Bishop of Malta Mgr Pietro Pace on the 27 October 1896.[7][8]

No feast in her honour was included in St Pius V's 1570 Tridentine Calendar. Vatican approval for the celebration of a feast in honor of Our Lady of Sorrows was first granted to the Servite order in 1667.

By inserting the feast into the General Roman Calendar in 1814, Pope Pius VII extended the celebration to the whole of the Latin Church. It was assigned to the third Sunday in September. In 1913, Pope Pius X moved the feast to September 15, the day after the Feast of the Cross.[9] It is still observed on that date.

Another feast, originating in Germany in the 15th century, spread to several other countries, and was extended to the whole of the Latin Church in 1727 by Pope Benedict XIII, who assigned it the Friday in Passion Week, one week before Good Friday.[10] In 1954, it still held the rank of major double (slightly lower than the rank of the September feast) in the General Roman Calendar. Pope John XXIII's 1960 Code of Rubrics reduced it to the level of a commemoration.

In 1969 the celebration was removed from the General Roman Calendar as a duplicate of the feast on 15 September.[11] Each of the two celebrations had been called a feast of "The Seven Sorrows of the Blessed Virgin Mary" (Latin: Septem Dolorum Beatae Mariae Virginis) and included recitation of the Stabat Mater as a sequence. Since then, the 15 September feast that combines and continues both is known as the Feast of "Our Lady of Sorrows" (Latin: Beatae Mariae Virginis Perdolentis), and recitation of the Stabat Mater is optional.

Observance of the calendar as it stood in 1962 is still permitted as an extraordinary form of the Roman Rite, and even where the calendar as revised in 1969 is in use, some countries, such as Malta, have kept it in their national calendars. In every country, the 2002 edition of the Roman Missal provides an alternative collect for this Friday:[12]

O God, who in this season
give your Church the grace
to imitate devoutly the Blessed Virgin Mary
in contemplating the Passion of Christ,
grant, we pray, through her intercession,
that we may cling more firmly each day
to your Only Begotten Son
and come at last to the fullness of his grace. 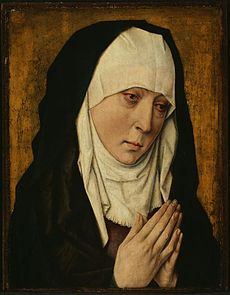 Our Lady of Sorrows is the patron saint of:

Our Lady of Sorrows, depicted as "Mater Dolorosa" (Mother of Sorrows) has been the subject of some key works of Roman Catholic Marian art. Mater Dolorosa is one of the three common artistic representations of a sorrowful Virgin Mary, the other two being Stabat Mater and Pietà.[15]

In this iconography, Our Lady of Seven Sorrows is at times simply represented in a sad and anguished mode by herself, her expression being that of tears and sadness. In other representations the Virgin Mary is depicted with seven swords in her heart, a reference to the prophecy of Simeon at the Presentation.