From Infogalactic: the planetary knowledge core
Jump to: navigation, search
This article is about a type of building or structure used primarily to house a toilet. For other uses, see Outhouse (disambiguation). 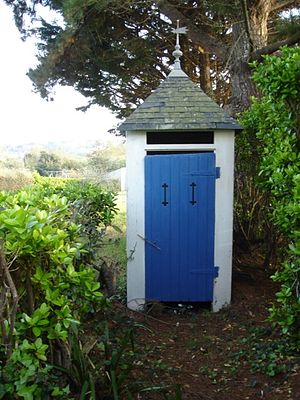 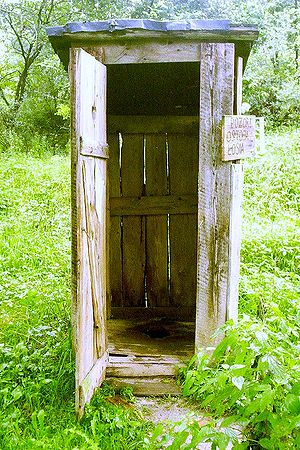 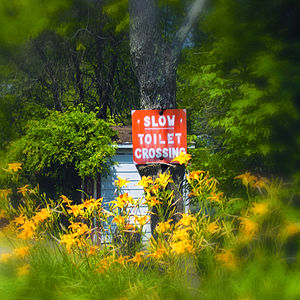 An outhouse (or privy) is a small structure, separate from a main building, which covers a pit latrine or a dry toilet. Outside North America, the term "outhouse" refers not to a toilet but to outbuildings in a general sense. Colloquially, the term is also used to denote the toilet itself, not just the small housing structure.

The term "outhouse" is used in North American English for the structure over a pit latrine.[1] The structures are referred to by many other terms throughout the English-speaking world, including "dunny" or "long drop" in Australia and New Zealand,[2] and "bog" in the United Kingdom. The terms "kybo" and "biffy" are unique to the Scouting movements.[3] In British English the word "outhouse" is used for any kind of separate or leanto structure and does not specifically refer to any kind of latrine or toilet. In the Welsh Language the expression "ty bach" = little house refers to any toilet, including a normal bathroom internal to a house. 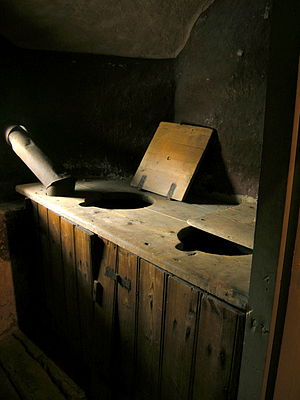 The privy at Örebro castle 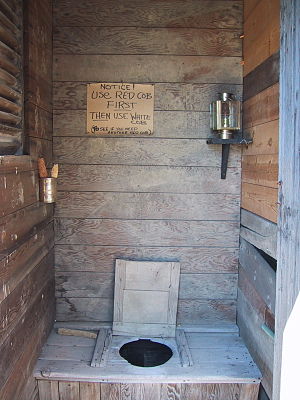 Interior of an 1880s example near Stamford, South Dakota, showing seat with cover and a louvered vent to one side 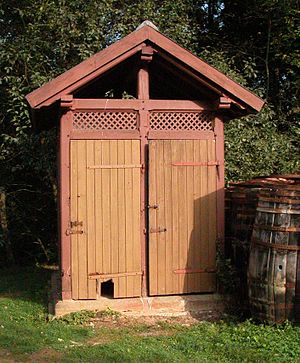 Outhouses vary in design and construction. Common features usually include: 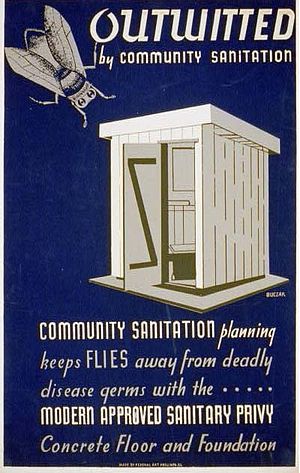 An outhouse is primarily a hole dug into the ground, into which biological waste solids and liquids are introduced, similar to a cesspit. If sufficient moisture is available, natural bacteria within the waste materials begin the process of fermentation. Earthworms, amoebas, molds, and other organisms in the surrounding ground soils, and flying insects entering the privy hole also consume nutrients in the waste material, slowly decomposing the wastes and forming a compost pile in the base of the pit. Bacteria form a complex biofilm on the wastes and in the surrounding exposed soils around the perimeter of the pit and feed on the wastes splashed or dropped into the pit.[citation needed]

An outhouse operates differently from a septic tank in that the pit is not normally filled with standing water. The solids act as a sponge to retain moisture but also are exposed to open air, allowing for insects and earthworms to feed on the wastes, which would not be possible within a septic tank. Septic tanks also tend to contain only organisms that can survive anaerobic conditions, while the open outhouse pit can sustain both aerobic and anaerobic organisms.[citation needed]

The process of decomposition is slow due to the layering of waste materials but is generally effective if the input of new wastes does not exceed the decomposition rate of the bacteria and other organisms. Small amounts of moisture from urination are absorbed by existing decomposed wastes in the base of the pit. In soils where the percolation rate of water through the soil is slow and where there is not a large amount of waste entering the pit, the wastes can slowly decompose and be rendered harmless without causing groundwater contamination.[citation needed]

In Scandinavia and some other countries, outhouses are built over removable containers that enable easy removal of the waste and enable much more rapid composting in separate piles.

In soils with a fast rate of percolation, such as sandy soils, or where the base of the pit penetrates topsoils and clay going directly down to underlying gravel and fractured substone, waste liquids entering the unlined pit may quickly seep deep underground before bacteria and other organisms can remove contaminants, leading to groundwater pollution. This fast percolation of liquid wastes out of the pit can be slowed or prevented in newly dug outhouses by lining the base of the pit and the walls with a layer of absorptive organic material such as a thick mat of grass clippings. This material then decomposes and becomes part of the compost pile lining the pit that continues to act as a moisture sponge.[citation needed]

In most outhouse designs, the privy hole is covered by a small building. The primary purpose of the building is for privacy and human comfort, so that the user is not exposed and does not get wet when it is raining or cold when it is windy. However, the building has the secondary and (possibly unintended by the builder) effect of protecting the privy hole from large influxes of water when it is raining, which would flood the hole and flush untreated wastes into the underlying soils before they can decompose.[citation needed]

On flat or low-lying ground, the privy hole can be further protected from rain and floodwaters by constructing a small raised hill or berm around the edge of the hole, using material from the hole when the pit is first excavated, to raise the outhouse foundation. This helps falling rain and surface water to flow away from the sides of the outhouse so it does not enter the pit and lead to groundwater contamination.[citation needed]

Rain and surface water flowing into a low-lying open pit will also lead to soil erosion around the edges of the pit, that may eventually undermine the building foundation and potentially lead to collapse of the structure into the enlarging hole.[citation needed]

Eventually, over a period of many years, the solid wastes form a growing pile that fill the pit. A new pit is dug somewhere nearby, and soil obtained from digging the new pit is used to cover and cap off the old pit. Underground organisms such as earthworms continue decomposition of the old pit until the fecal material becomes indistinguishable from the surrounding ground soils.[citation needed]

In locations where an outhouse must serve a large number of users, the single pit may be extended to form a long covered trench or a series of separate pits, so that the waste inputs are spread out over a larger surface area. The fastest waste decomposition generally occurs in the uppermost layer of solids exposed to the air. Decomposition continues slowly in deeper layers but relies on diffusion of air into the solids to sustain life for the organisms within the solids.[citation needed]

A deeper pit may appear to provide additional capacity, but a thick layer of fresh solids deposited by many users may exceed the natural decomposition rate of the organisms in the pit, leading to increased potential for waste seepage out of the pit. A deep pit may also penetrate upper slow-percolation surface soil layers, and allow entry of contaminated waste liquids into the underlying fast percolation subsoils.[citation needed]

Decomposition may be accelerated by stirring or turning the pile, which breaks up the pile and introduces air pockets and air channels that allow faster organism growth within the bed of solids.[citation needed]

In areas where an open pit cannot be safely constructed due to extremely high soil percolation rates and lack of absorptive organic material to absorb and decompose liquid wastes, the open pit can be replaced with a solid-walled storage tank, that typically must be pumped out regularly if water and waste matter is not permitted to leach out of the storage tank.[citation needed]

As opposed to a closed holding tank, a septic tank can be fashioned. The tank is fabricated so that waste water enters the first chamber of the tank, allowing solids to settle and scum to float. The settled solids are anaerobically digested, reducing the volume of solids. The liquid component flows through the dividing wall into the second chamber, where further settlement takes place, with the excess liquid just below the scum layer then draining in a relatively clean condition from the outlet into the leach field, also referred to as a drain field or seepage field.[citation needed]

If bacteria are added to the septic tank (as directed by the manufacturer), and no non-biodegradable matter (such as oil, grease, plastics, styrofoam, diapers, etc.) is flushed into the system, the waste matter will break down into its basic elements and the septic tank will operate trouble free for many years without the solid waste having to be pumped out.[citation needed]

As a sometimes beneficial consequence of trace amounts of waste matter making its way to the leach field, foliage will naturally flourish over the leach field, hence the phrase, "grass is always greener over the septic tank."[citation needed]

As with standard septic and sewage systems, toxic substances such as paint, oil, and chemicals must not be dumped into outhouse pits. The toxic materials will either kill the organisms breaking down the compost pile, or the chemicals may not be digestible, eventually seeping deeper underground and contaminating groundwater under the pit.[citation needed]

The decomposition of solids by organisms naturally leads to the emission of gases such as methane and hydrogen sulfide. These gases linger within the pit and are the source of the pit odor, but the open-pit nature permits diffusion of these gases out of the pit, so concentrations are typically low enough not to cause harm.[citation needed]

The odor can be reduced by installing a vertical vent tube in the corner of the outhouse structure. In the warmth of the day the vent tube is heated, which sets up a slow air convection current that draws fresh air into the privy hole, and expels warmed pit gases out the top of the vent tube.[citation needed]

Both of these are undesirable pests to humans, but can be easily controlled without chemicals by enclosing the top of the pit with tight-fitting boards or concrete, using a privy hole cover that is closed after every use, and by using fine-grid insect screen to cover the inlet and outlet vent holes. This prevents flying insect entry by all potential routes.[citation needed]

One of the purposes of outhouses is to avoid spreading parasites such as intestinal worms, notably hookworms, which might otherwise be spread via open defecation.

Outhouse design, placement, and maintenance has long been recognized as being important to the public health. See posters created by the Works Progress Administration.[23]

The growing popularity of paddling, hiking, and climbing has created special waste disposal issues throughout the world. It is a dominant topic for outdoor organizations and their members.[20] 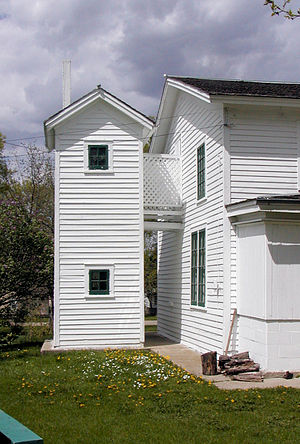 Two-level outhouse connected to main house via a skyway at the Hooper-Bowler-Hillstrom House in Belle Plaine, Minnesota