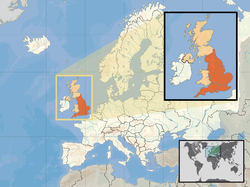 The following outline is provided as an overview of and topical guide to England:

England is a country that is part of the United Kingdom.[1][2][3] Its 54,316,600 inhabitants account for more than 84% of the total UK population,[4] while its mainland territory occupies most of the southern two-thirds of the island of Great Britain. England is bordered by Scotland to the north, Wales to the west and the North Sea, Irish Sea, Celtic Sea, Bristol Channel and English Channel. The capital is London, the largest metropolitan area in Great Britain, and the largest urban zone in the European Union by many measures.[note 1]

Government and politics of England

Main article: Government of England and Politics of England

Law and order in England

History of England by period

History of England by region

History of England by subject

Economy and infrastructure of England

Types of schools in England