The Flag of Greece

The Coat of arms of Greece
File:LocationGreece.png
The location of Greece 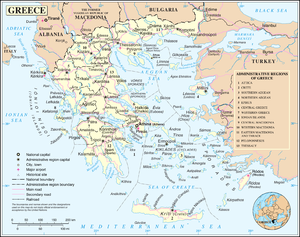 An enlargeable map of the Hellenic Republic
See also: Index of Greece-related articles

The following outline is provided as an overview of and topical guide to Greece:

Greece – sovereign country located on the southern end of the Balkan Peninsula in Southern Europe.[1] Greece borders Albania, Bulgaria, and the Republic of Macedonia to the north, and Turkey to the east. The Aegean Sea lies to the east and south of mainland Greece, while the Ionian Sea lies to the west. Both parts of the Eastern Mediterranean basin feature a vast number of islands.

Greece lies at the juncture of Europe, Asia and Africa. It is heir to the heritages of ancient Greece, the Roman and Byzantine Empires,[2] and nearly four centuries of Ottoman rule.[3] Greece is the birthplace of democracy,[4] Western philosophy,[5] the Olympic Games (for this reason, unless it is the host nation, it always leads the Parade of Nations in accordance with tradition begun at the 1928 Amsterdam Olympics), Western literature and historiography, political science, major scientific and mathematical principles, and Western drama[6] including both tragedy and comedy.

Greece is a developed country, a member of the European Union since 1981,[7] a member of the Economic and Monetary Union of the European Union since 2001, NATO since 1952,[8] the OECD since 1961,[9] the WEU since 1995 and ESA since 2005.[10] Athens is the capital; Thessaloniki, Patras, Heraklion, Volos, Ioannina, Larissa and Kavala are some of the country's other major cities. 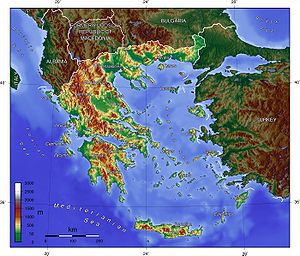 Government and politics of Greece

Main article: Government of Greece and Politics of Greece

Branches of the government of Greece

Executive branch of the government of Greece

Legislative branch of the government of Greece

Judicial branch of the government of Greece

There are three Supreme Courts in Greece. They are:

The Hellenic Republic is a member of:[1]

Law and order in Greece

Economy and infrastructure of Greece