Overseas departments and territories of France

The French Overseas Departments and Territories (French: départements et territoires d'outre-mer, colloquially referred to as the DOM-TOM [dɔmtɔm][1]) consist of all the French-administered territories outside of the European continent. These territories have varying legal status and different levels of autonomy, although all (except those with no permanent inhabitants) have representation in the Parliament of France, and consequently the right to vote in elections to the European Parliament. The French Overseas Departments and Territories include island territories in the Atlantic, Pacific and Indian oceans, French Guiana on the South American continent, and several periantarctic islands as well as a claim in Antarctica.

The French Overseas Departments and Territories have an exclusive economic zone (EEZ) of 9,821,231 km² (3,791,998 sq. miles),[2] and account for 17.8% of the land territory and 96.7% of the EEZ of the French Republic (excluding the district of Adélie Land, part of the French Southern and Antarctic Territories, where the French sovereignty is effective de jure by French law, but where the French exclusive claim on this part of Antarctica is frozen by a mandatory international cooperation since the signing of the Antarctic Treaty in 1959).[citation needed]

From a legal and administrative standpoint, departments are very different from territories. The French constitution provides that, in general, French laws and regulations (France's civil code, penal code, administrative law, social laws, tax laws, etc.) apply to French departments the same as in mainland France, but can be adapted as needed to suit the departments' particular needs. In French territories, laws cannot be adapted. Under France's so-called "autonomy statutes", the departments are empowered to make their own laws, except in certain areas (such as defense, international relations, trade and currency, and judicial and administrative law), where the territories are bound by the laws promulgated by the French government and by those France appoints to oversee the territories.

Each inhabited French territory, metropolitan or overseas, is represented in both the French National Assembly and the French Senate (which together make up the French Parliament), as well as in the European Parliament (French citizens living overseas are voting in the Overseas constituency). The overseas departments and territories are governed by local elected assemblies and by the French Parliament and French government (where a cabinet member, the Minister of Overseas France, is in charge of issues related to the overseas departments and territories).

The status of overseas country (Pays d'outre-mer), projected for French Pacific dependencies, was finally never created. The 2004 status of French Polynesia gives it this designation but also reflects that it belongs to the category of overseas collectivities. The Constitutional Council of France confirmed that the designation of overseas country had no legal consequences. Since New Caledonia's status has no name, and since its parliament can make local laws, it is sometimes incorrectly termed an overseas country.

Political representation in the French Parliament 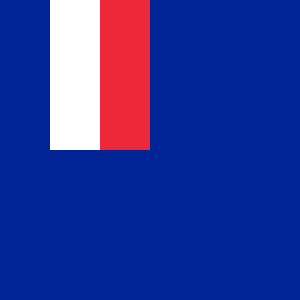 Flag of the Minister of Overseas France

With 2,691,000 inhabitants in 2013, the French overseas departments and territories account for 4.1% of the population of the French Republic.[8] They enjoy a corresponding representation in the two chambers of the French Parliament.

Representation in the National Assembly

Representation in the Senate

The 11 French overseas territories are :

(Lands generally uninhabited, except by researchers in scientific stations)

Ranked by population in the urban area: