From Infogalactic: the planetary knowledge core
Jump to: navigation, search
This article is about the political concept. For the 2010 novel, see The Overton Window. 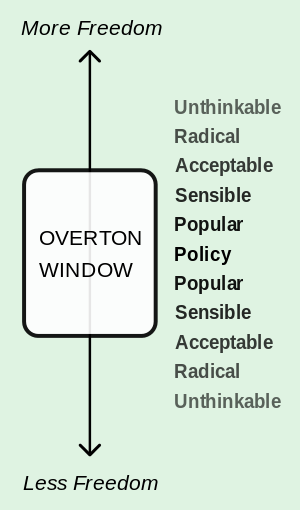 An illustration of the Overton Window, along with Treviño's degrees of acceptance.

The Overton window, also known as the window of discourse, is the range of ideas the public will accept. It is used by media pundits.[1][2] The term is derived from its originator, Joseph P. Overton (1960–2003),[3] a former vice president of the Mackinac Center for Public Policy,[4] who in his description of his window claimed that an idea's political viability depends mainly on whether it falls within the window, rather than on politicians' individual preferences.[5] According to Overton's description, his window includes a range of policies considered politically acceptable in the current climate of public opinion, which a politician can recommend without being considered too extreme to gain or keep public office.

Overton described a spectrum from "more free" to "less free" with regard to government intervention, oriented vertically on an axis, to avoid comparison with the left-right political spectrum.[6] As the spectrum moves or expands, an idea at a given location may become more or less politically acceptable. Political commentator Joshua Treviño postulated that the degrees of acceptance of public ideas are roughly:[7]

The Overton window is an approach to identifying which ideas define the domain of acceptability within a democracy's possible governmental policies. Proponents of policies outside the window seek to persuade or educate the public in order to move and/or expand the window. Proponents of current policies, or similar ones, within the window seek to convince people that policies outside it should be deemed unacceptable.

After Overton's death, others have examined the concept of adjusting the window by the deliberate promotion of ideas outside of it, or "outer fringe" ideas, with the intention of making less fringe ideas acceptable by comparison.[8] The "door-in-the-face" technique of persuasion is similar.

The idea echoes several earlier expressions, the most recent and similarly academic being Hallin's spheres. In his 1986 book The Uncensored War,[9] communication scholar Daniel C. Hallin posits three areas of media coverage into which a topic may fall. The areas are diagrammed as concentric circles called spheres. From innermost to outermost they are the sphere of consensus, the sphere of legitimate controversy, and the sphere of deviance. Proposals and positions can be placed at varying degrees of distance from the metaphorical center, and political actors can fight over and help change these positions.

Hallin's theory is developed and applied primarily as a theory that explains varying levels of objectivity in media coverage, but it also accounts for the ongoing contest among media and other political actors about what counts as legitimate disagreement, potentially leading to changes in the boundaries between spheres. As one study that applies Hallin's theory explains, "the borders between the three spheres are dynamic, depending on the political climate and on the editorial line of the various media outlets."[10] In this way, the idea also captures the tug-of-war over the boundaries between normal and deviant political discourse.

An idea similar to the Overton window was expressed by Anthony Trollope in 1868 in his novel Phineas Finn:

"Many who before regarded legislation on the subject as chimerical, will now fancy that it is only dangerous, or perhaps not more than difficult. And so in time it will come to be looked on as among the things possible, then among the things probable;–and so at last it will be ranged in the list of those few measures which the country requires as being absolutely needed. That is the way in which public opinion is made."

"It is no loss of time," said Phineas, "to have taken the first great step in making it."

"The first great step was taken long ago," said Mr. Monk,–"taken by men who were looked upon as revolutionary demagogues, almost as traitors, because they took it. But it is a great thing to take any step that leads us onwards."

In his "West India Emancipation" speech at Canandaigua, New York, in 1857,[11] abolitionist leader Frederick Douglass described how public opinion limits the ability of those in power to act with impunity:

Find out just what any people will quietly submit to and you have found out the exact measure of injustice and wrong which will be imposed upon them, and these will continue till they are resisted with either words or blows, or with both. The limits of tyrants are prescribed by the endurance of those whom they oppress.