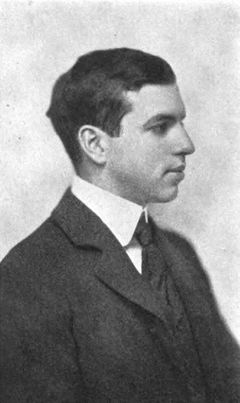 Owen McMahon Johnson (27 August 1878 – 27 January 1952) was an American writer best remembered for his stories and novels cataloguing the educational and personal growth of the fictional character Dink Stover. The "Lawrenceville Stories" (The Prodigious Hickey, The Tennessee Shad, The Varmint, Skippy Bedelle, The Hummingbird), set in the well-known prep school, invite comparison with Kipling's Stalky & Co. A 1950 film, The Happy Years, and a 1987 PBS mini-series were based on them.

He was born in New York City, the son of Robert Underwood Johnson and his wife Katharine, née McMahon, and attended Lawrenceville School, founding and editing the Lawrenceville Literary Magazine, known as The Lit.[1] He attended Yale University, as a member of the Class of 1900,[2] graduating in 1901, marrying Mary Galt Stockly and moving to Paris, where he did his initial writing. He was a war correspondent for the New York Times and Collier's during World War I.

Johnson worked and resided in Stockbridge, Massachusetts[1] from 1923 to 1948, writing about marriage, divorce, and golf. After 1931, his writing activities became less intense, and he became interested in politics, running (unsuccessfully) for the House of Representatives in 1936 and 1938.[1]

He died at his home in Vineyard Haven, Massachusetts, where he had lived for five years.[1]

A 1987-1989 miniseries of The Lawrenceville Stories was directed by Allan A. Goldstein and Robert Iscove. The series followed the adventures of school prankster Hickey (Zach Galligan) and his rival, The Tennessee Shad (Nicholas Rowe)[3].